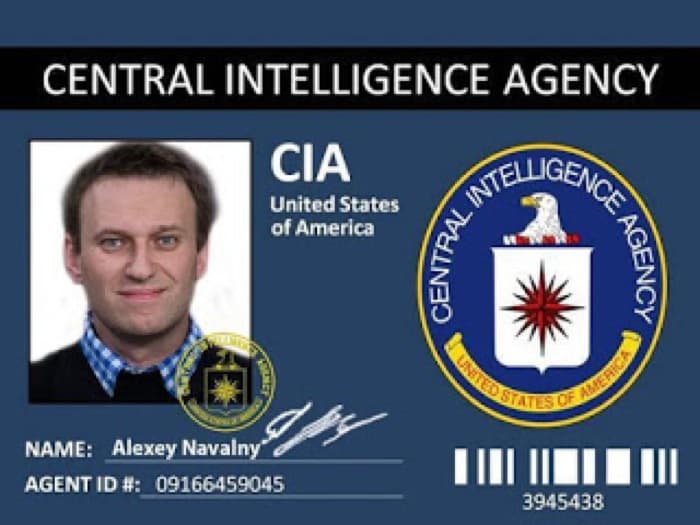 I wrote some weeks ago suspecting that the anti-Putin oppositor Navalny was a Deep State agent, now Russia Today claims that he works for Central Intelligence Agency quoting an important Kremlin allegation…

…by Bryan MacDonald for Russia Today

“Probably, it is not the patient [Navalny] who works for the Western special services, but that the Western intelligence services who work with him – this would be more correct [to say],” Dmitry Peskov explained.  “I can even be specific: these days, specialists from the Central Intelligence Agency (CIA) of the United States of America are working with him.”

“This isn’t the first time he’s been given different instructions,” the spokesman continued. “The instructions given to the patient are obvious. We have seen such patterns of behavior on more than one occasion.”

The bombshell allegation comes just hours after Navalny claimed Putin was behind his alleged poisoning in August. He told Germany’s Der Spiegel magazine that he had “no other explanation for what happened.”

Peskov took umbrage at the activist’s comments alleging Putin’s involvement in the incident, dismissing them as“baseless” and “insulting.” He told reporters “we believe that such accusations against the Russian president are absolutely unfounded and unacceptable.”

German officials alleged, last month, that Navalny had been targeted with a nerve agent from the ‘Novichok’ family.“We want to investigate the case of the Berlin patient [Navalny] and establish the cause of what happened,” Peskov explained, expressing doubt about the veracity of the German analysis. “For this, we need to get information from those who found traces of poisoning.”

The Kremlin has previously complained that Berlin has been uncooperative in providing evidence that the Moscow protest leader had indeed been attacked with Novichok.

Peskov also commented on Navalny’s intention to return to Russia, as expressed to Der Spiegel, observing that he saw no heroism in his declaration.

“Any citizen of Russia can return to his homeland at any time,” the spokesman outlined. “Treatment can take place in our country, in fact, almost all people avail of this. Lives are saved in our country, and the life of this patient was also saved in Russia.” This refers to when Navalny had initially been hospitalized in Siberia.

Alexei Navalny was in a coma from August 20 to September 7, after falling ill during a flight to Moscow from Tomsk. First, he was hospitalized in Omsk, after an emergency landing, before being transported to Berlin’s Charité clinic days later.

After making a speedy recovery (taking into account the alleged lethality of Novichok), the anti-corruption activist was discharged last week.