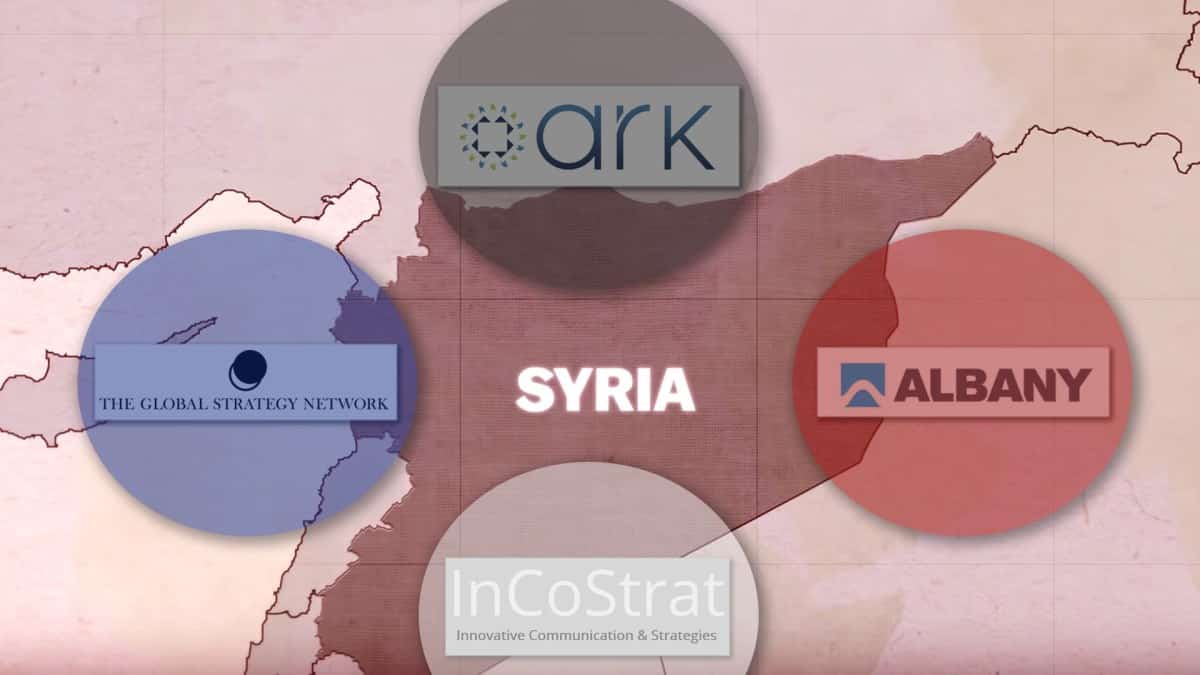 You’ve already seen this over the past seven years or so: New World Order agents funded and coached terrorist organs in Syria. Not only that, they deliberately “planted stories in media outlets from BBC to Al Jazeera, and ran a cadre of journalists.”

How do we know this? Leaked documents:

“Leaked documents show how UK government contractors developed an advanced infrastructure of propaganda to stimulate support in the West for Syria’s political and armed opposition.Virtually every aspect of the Syrian opposition was cultivated and marketed by Western government-backed public relations firms, from their political narratives to their branding, from what they said to where they said it.”

VT has been reporting on these issues since the beginning of time. VT writers of various stripes have reported how Turkey, Israel, the United States, Saudi Arabia, Qatar, among other countries, have all collaborated in order to create social and political unrest in Syria.

“The leaked files reveal how Western intelligence cutouts played the media like a fiddle, carefully crafting English- and Arabic-language media coverage of the war on Syria to churn out a constant stream of pro-opposition coverage. US and European contractors trained and advised Syrian opposition leaders at all levels, from young media activists to the heads of the parallel government-in-exile.

“These firms also organized interviews for Syrian opposition leaders on mainstream outlets such as BBC and the UK’s Channel 4.More than half of the stringers used by Al Jazeera in Syria were trained in a joint US-UK government program called Basma, which produced hundreds of Syrian opposition media activists.

“Western government PR firms not only influenced the way the media covered Syria, but as the leaked documents reveal, they produced their own propagandistic pseudo-news for broadcast on major TV networks in the Middle East, including BBC Arabic, Al Jazeera, Al Arabiya, and Orient TV.”

Back in 2013, Gordon Duff rightly said that the war in Syria was thoroughly orchestrated and methodically executed by a world-wide organized crime, one which continues to hunt politicians across the political spectrum in the United States and Europe. The late John McCain was part of this covert activity. VT once again produced a plethora of evidence showing that both the United States and Israel were the key players behind the diabolical war–a war that has devastated the entire country itself. Ben Norton, a brave journalist, has recently written:

“These UK-funded firms functioned as full-time PR flacks for the extremist-dominated Syrian armed opposition. One contractor, called InCoStrat, said it was in constant contact with a network of more than 1,600 international journalists and ‘influencers,’ and used them to push pro-opposition talking points. Another Western government contractor, ARK, crafted a strategy to ‘re-brand’ Syria’s Salafi-jihadist armed opposition by ‘softening its image.’ ARK boasted that it provided opposition propaganda that “aired almost every day on” major Arabic-language TV networks.”

Norton moved on to make this bold but factual statement:

“Virtually every major Western corporate media outlet was influenced by the UK government-funded disinformation campaign exposed in the trove of leaked documents, from the New York Times to the Washington Post, CNN to The Guardian, the BBC to Buzzfeed.”

Once again, VT has been saying the same thing for more than seven years. Norton indeed is trying to catch up with us here.

What we are seeing is that Israel has much of the Western media and politicians by the balls. Israel tells them what to do, and those media outlets and politicians blindly execute the order. As we have reported over the years, Israel wanted to remove Assad from power from the very beginning of the war in Syria. In fact, Israel literally wanted terrorist organizations to thrive in the region because, according to them, terrorism is better than the Assad government.

Moreover, colossal hoaxes and deliberate lies were summoned in order to destroy the cohesive government in Syria. Ian Henderson, former OPCW inspection team leader and engineering expert, even declared to the United Nations Security Council that no chemical attack ever occurred in places like Douma!

Assad didn’t fall for any Western machination. In fact, he didn’t want to go down without a fight. In fact, he had no other choice but to fight. He could not let the Israeli regime win. He had to preempt the tidal waves of terrorists coming to Syria. And the main diabolical force that has been supporting terrorist activities in the region for more than seven years was and still is Israel.

Assad was therefore fighting for the survival of Syria, an ancient and significant region in the Middle East which played a huge role in the propagation of Christianity in the first century and all the way to the present. In fact, Syrian Christians look to Assad for protection. Even news outlets such as PBS know that both Assad and Saddam Hussein protected Christians.

Since Israel is essentially a manifestation of “the synagogue of Satan,” Israel has to attack any country that once was a haven for Christianity and marginalized groups that respect Logos and are docile to the moral order.. So what choice did Assad have again? Well, he had everything to lose if Syria fell. The Syrian people had everything to lose if the jihadists and other terrorist cells invaded the country. In that sense, Assad had to put his back against a solid wall and fight the ideological tidal waves coming from Israel and the United States. Thanks to Russia, Assad is still thriving, and Syria will survive.

What we are seeing here is that New World Order Agents in Syria are the losers because Assad is still in power. Now we have an avalanche of material which incontrovertibly shows that dark forces and world-wide organized crimes were at work in Syria. The same dark forces which destroyed countries like Iraq and Afghanistan were on the brink of bringing Syria to its knees. But since Logos has a way of working itself out in history, as Hegel put it, the forces of evil retreated in Syria, despite the fact that Syria was outnumbered. Norton continued:

“Other materials show how London and Western governments worked together to build a new police force in opposition-controlled areas.

“Many of these Western-backed opposition groups in Syria were extremist Salafi-jihadists. Some of the UK government contractors whose activities are exposed in these leaked documents were in effect supporting Syrian al-Qaeda affiliate Jabhat al-Nusra and its fanatical offshoots.

“The documents were obtained by a group calling itself Anonymous, and were published under a series of files entitled, ‘Op. HMG [Her Majesty’s Government] Trojan Horse: From Integrity Initiative To Covert Ops Around The Globe. Part 1: Taming Syria.’ The unidentified leakers said they aim to ‘expose criminal activity of the UK’s FCO and secret services,’ stating, ‘We declare war on the British neocolonialism!’”

“A leaked UK Foreign and Commonwealth Office report from 2014 reveals a joint operation with the Ministry of Defence and the Department for International Development to support “strategic communications, research, monitoring and evaluation and operational support to Syrian opposition entities.”

Well, this was the year in which VT began to publish a treasure trove of information on organized crimes in Syria.

This brings us to an important point: ideologies in the West begin to be very interesting because much of the far-right in both Europe and elsewhere did not even challenge their governments about their diabolical wars in the Middle East and in countries around much of the world. But since perpetual wars have now begun to affect virtually every country in the West, far-right groups and nationalists now think it’s time to come out of the woods with sticks and manchettes. Richard Spencer in the United States is a classic example.