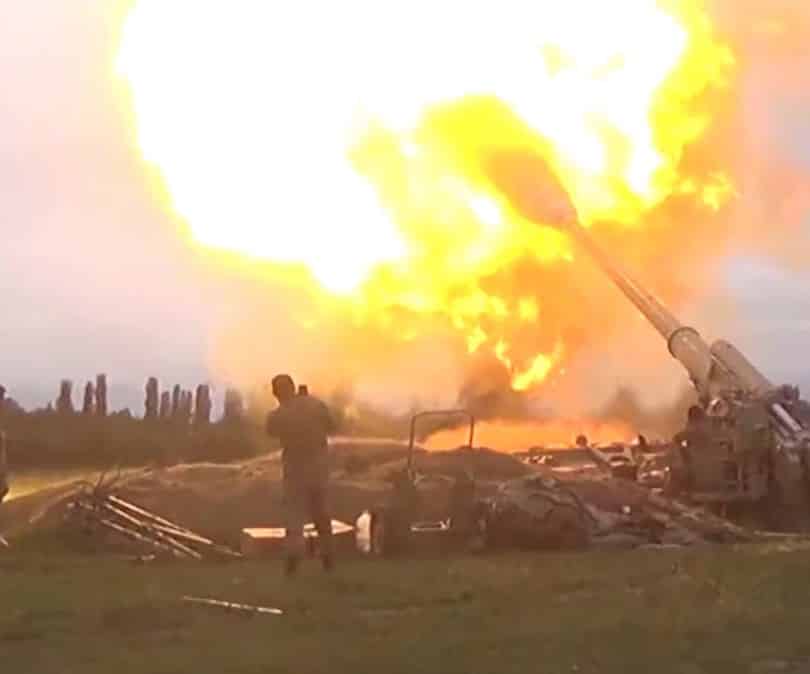 By Harut Sassounian for VT
Publisher, The California Courier
www.TheCaliforniaCourier.com

At the time of writing this analysis, on Oct. 5, 2020, the war between Armenia and Nagorno Karabagh on one side, and Azerbaijan, Turkey and Islamist mercenaries on the other, is continuing with countless deaths of soldiers and civilians, and widespread damage of cities and villages. This week, I will analyze the role of each of the key players in the conflict:

Azerbaijan’s President Ilham Aliyev, refusing to accept Nagorno Karabagh  Armenians’ right to self-determination and following up on his numerous threats to solve the conflict militarily, launched a massive attack against Armenia and Nagorno Karabagh on Sept. 27, 2020. Before the war, Azerbaijan secured the support of the Turkish armed forces and a large number of terrorists from Syria paid by the Turkish government.

The Presidents of Azerbaijan and Turkey have ignored all appeals for ceasefire, including a joint statement by France, Russia and the United States. Aliyev announced that there will be no ceasefire and no negotiations until Armenian forces leave Nagorno Karabagh. Azerbaijan and Turkey not only want to occupy Nagorno Karabagh, but unleash a second genocide on Armenians.

This is an existential threat to the Armenian people. It is a war against all 10 million Armenians worldwide. Fortunately, Armenians have understood the serious danger to their existence and have joined hands to repulse the enemy. After the Azeri/Turkish attack fails, Armenia should refuse all proposals for negotiations and safeguard the land of Nagorno Karabagh which has been liberated with the blood of brave Armenian young men. Azerbaijan and Turkey have attacked not only Armenian military targets, but also civilians in major cities and villages. This is a war crime for which Azerbaijan and Turkey should be held responsible in front of the European Court of Human Rights and the International Court of Justice.

Armenia should also file a complaint with the United Nations since Azerbaijan is a signatory to the UN “International Convention Against the Recruitment, Use, Financing and Training of Mercenaries.” The Convention calls for punishment “by appropriate penalties which take into account the grave nature of those offenses.”

Turkey should have no role in the Nagorno Karabagh conflict. Erdogan keeps talking about one nation, two states, referring to Azerbaijan and Turkey. Why does he then not accept the same concept for Armenia and Nagorno Karabagh? He has no right to speak about Nagorno Karabagh’s status, since Turkey itself occupied Northern Cyprus in 1974.

For far too long, Turkey has armed and trained terrorists in Syria, Iraq and Libya, and now in Azerbaijan. The international community is just as guilty as Turkey for not sanctioning it for its terroristic activities. Erdogan has learned that he will get away with murder and no country will say a word. It is time to muzzle Erdogan and check his expansionist desires.

Besides the physical war, there is also a war of propaganda and falsehoods being waged by Azerbaijan and Turkey. As usual, Turkey is lying about the most obvious facts. If it can deny the genocide of 1.5 million Armenians, it can also deny that it has military forces and advisors in Azerbaijan fighting against Armenia and Nagorno Artsakh. Turkey also denies that it has recruited Islamist terrorists to fight in Nagorno Karabagh.

Hundreds, if not thousands, of Islamist terrorists have been recruited by Turkey from Northern Syria to go to Azerbaijan to fight against Armenia and Nagorno Artsakh. Many of their phone calls have been recorded in recent days stating that they were misled by Turkey into believing that they will only perform guard duties, not fight in a war. The terrorists stated that they want to leave, but are prevented from doing so. They have come to Azerbaijan after Turkey offered them a couple of thousand dollars a month. Despite the denials of Azerbaijan and Turkey, Armenia’s National Security Services have recorded the terrorists’ phone calls speaking in Arabic and Turkish and advising their fellow terrorists not to come to Azerbaijan.

Russia is the only world power that can stop the fighting as it has done many times before. Either Russian President Vladimir Putin is unable to pressure Azerbaijan and Turkey to declare a ceasefire or unwilling to do so, until it can secure concessions from Armenia, Azerbaijan and Turkey for its own benefit.

The problem is that Armenia is a member of the Collective Security Treaty Organization (CSTO) which has a mutual defense agreement with Russia and several other former Soviet states. So far Armenia has not applied to CSTO to come to its defense from Azerbaijan’s attacks on the Republic of Armenia, announcing that it can protect its own territory. Armenia should ask CSTO to secure its protection from attacks by Turkey and Azerbaijan. If Armenia applies and CSTO rejects to fulfill its treaty obligations, then we will know that CSTO is a paper tiger. There may be behind the scenes discussions between Armenia and CSTO to come to Armenia’s rescue at the appropriate time, before Armenia is in danger.

Supporting Armenia is also in Russia’s own interest. First of all, the Caucasus region is considered Russia’s sphere of influence which Turkey should not be allowed to encroach. Secondly, the Islamist terrorists that Turkey has sent to Azerbaijan could end up being a threat to Russia’s security. The sooner Russia pressures Azerbaijan and Turkey to send the terrorists back, the better for its own interests.

Armenia is also displeased that Russia sells sophisticated jets and missiles to Azerbaijan. This is an inappropriate conduct for a strategic ally of Armenia. It is understandable that Russia is making these military sales for its own economic benefit, but Armenians have to constantly remind Russia that it is undermining its own reputation in Armenia by supplying weapons to Armenia’s enemy.

The Iranian government has always maintained a neutral position in the Armenia Azerbaijan conflict. In the current war, Iran was alarmed when Azeri missiles fell inside the Iranian territory Injuring a child. Iran also expressed its serious concern with Azerbaijan importing mercenary terrorists which could pose a danger to Iran’s security.

It is shameful that the Israeli government continues to provide sophisticated drones and missiles to Azerbaijan in return for Azeri oil. Would Israel, if it existed during World War II, have sold weapons to Hitler in return for financial gains? No wonder Armenia last week recalled its newly-appointed Ambassador from Tel Aviv. American Armenians should impress upon American Jews and American Jewish organizations that Israel’s arming of Azerbaijan is morally repugnant and it will be held responsible for the deaths of Armenian civilians and soldiers. Even during the height of this war, scores of Azeri cargo planes have been seen in Israel loading advanced weapons for Azerbaijan!

France is the only country in the world that has told the truth about the conflict. French President Emmanuel Macron declared that Azerbaijan was the one that initiated the attack on Nagorno Karabagh and also confirmed that Turkey has sent Islamist terrorists to Azerbaijan. It is not clear what France will do beyond mere words, nevertheless, Armenians worldwide appreciate the French position.

The United States, if it wanted to, could also pressure Turkey to stay out of the Armenian-Azeri conflict. Unfortunately, despite Pres. Trump’s statement that he will look into the conflict, nothing has been done. Trump’s close friendship with Erdogan does not give Armenians any comfort that the United States will play a moderating role in the conflict, particularly at a time when Trump is infected with the coronavirus.

The only positive action coming from the House of Representatives is its planned adoption of Resolution 1165 which condemns Azerbaijan for its attack on Nagorno Karabagh and denounces Turkey for its participation in the war on the side of Azerbaijan. Going beyond condemnation, the United States should sanction Azerbaijan and Turkey, cut off all military and foreign aid to both countries, and designate them as terrorist states!

In conclusion, Armenia cannot rely on anyone but its own people to defend its homeland. It is very encouraging that Armenians worldwide have come to the support of Armenia and Nagorno Karabagh donating funds and humanitarian supplies. All Armenians have to continue to counter Azeri and Turkish military and propaganda attacks. When Azerbaijan sees that its military has failed to yield any results, it will be forced to admit that Nagorno Karabagh will never become a part of Azerbaijan. After these vicious Azeri and Turkish attacks, no Armenian will agree to have the people of Nagorno Karabagh live under the brutal rule of the corrupt dictator Aliyev.