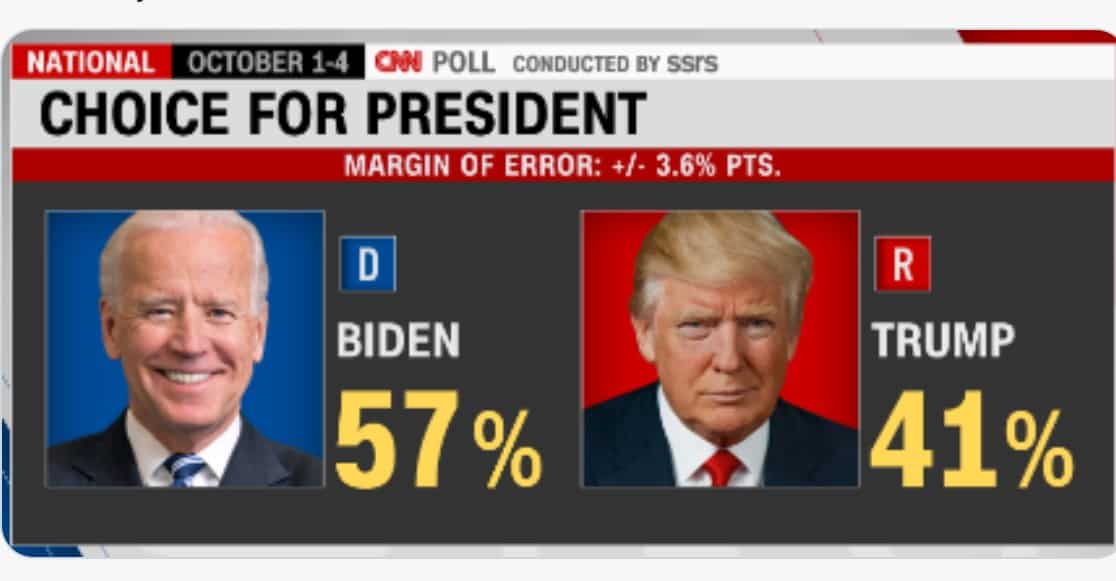 Older voters, women, abandon Trump entirely while others are simply walking away and not looking back.

Daily Beast: Having returned to the White House after his three-day hospitalization with COVID-19, President Donald Trump is trying to figure out how to salvage his campaign—and it’s clear he has a lot of work to do.

The usual polling caveats apply, but Biden's double-digit leads in these CNN and NBC/WSJ polls are powered in part by Trump's decline with senior voters. Biden leads Trump with seniors by 27 points in the NBC poll, and by 22 points in the CNN poll. https://t.co/8N11XMFc0l

A CNN/SSRS poll published Tuesday morning shows that Biden has opened up his biggest lead of the campaign so far, with 57 percent of likely voters saying they will back Biden compared to Trump’s 41 percent.

NEW POLL: Biden up by 9 points in Michigan https://t.co/1E9Rpj8onH pic.twitter.com/72utxsUD6g

The 16 percentage-point lead was recorded after last week’s debate between the two men, and mostly after Trump’s COVID-19 infection was made public Friday morning.

The numbers are similar to those seen in an NBC News/Wall Street Journal poll released Sunday, and conducted before the president’s COVID-19 announcement, which gave Biden a still-hefty 14 percentage-point lead.

NEW: Joe Biden now has a 12-point lead over Trump in Pennsylvania, according to a new Monmouth University poll, which also found that a majority of voters in the battleground state think Biden better understands their daily concerns.https://t.co/I7SeoJufcd

Likely voters broadly prefer Biden over Trump on a number of issues that voters consider critically important in the race, including the coronavirus outbreak (59% prefer Biden, 38% Trump), health care (59% to 39%), racial inequality in America (62% to 36%), nominations to the Supreme Court (57% to 41%) and crime and safety (55% to 43%). The two are about even over who would better handle the economy (50% say Biden, 48% Trump), similar to where they have been among registered voters in recent polling.