…from the Armeian front and the jihadi graveyard

[ Editor’s note: There was no pot of gold at the end of the rainbow awaiting these grown up Syrian idiots who swallowed the Turkish bait to make some easy money in Armenia, and to have some fun killing Christians there defending their homeland.

While one would by reflex feel sympathy for their families, I do not. Why? Because I had a mother where if I had come home one day to let her know I was going off to make some quick money killing people who had done nothing to me or my country, she would have quickly told me:

“I’ll disown your ass if you do, so don’t ever plan on coming back here.” My mother was very straightforward in her communications.

But the mothers of these men appear to not have told them that. In Muslim society they could not have. So their sons were buried quickly at night with no ceremony for the benefit of those who sent them, and who preferred the topic not be discussed much.

In a more perfect world, the leaders involved would be charged, tried and get the firing squad for their negligence, but alas this will not happen.

The families will have one memory though, this video of them moving on low hills but in open ground, where the Azeris did not bother to waste a drone to scout their course for them to give warnings they might be approaching an ambush.

They had minimal transportation with them, no medical evacuation vehicle, no situational awareness, blind men walking toward their deaths.

It looks like the Armenian ambush teams hemmed their perimeter in with small arms fire to bunch them up to make a better target for the artillery that had the range on them.

But it is good that they were buried like toxic chemicals being disposed of to protect society. “Those that live by the sword, may they die by the sword”. Hopefully others will not follow their example… Jim W. Dean ] 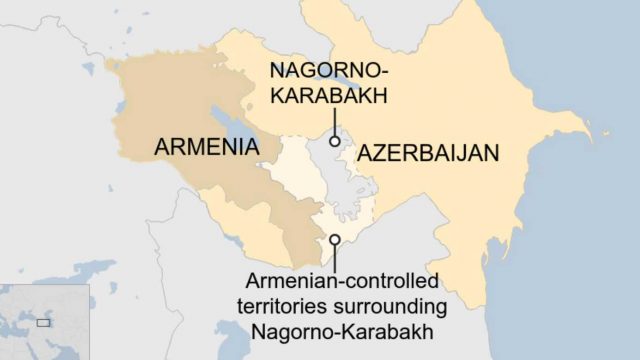 Last night, four refrigerated trucks of meat trucks arrived at one of the crossings in the northern countryside of Aleppo, carrying the bodies of about forty Syrian fighters from the Syrian National Army, who were killed in Azerbaijan.

They were buried at night, and in complete secrecy, in collective graves, in the villages and cities of the northern countryside of Aleppo, in the midst of great care not to know the location of the burial, or the return of the bodies, in the presence of a cleric and a limited number of the dead comrades and their relatives.

Our correspondent also learned that the “Al-Amshat” faction has sent a first batch of its fighters to Azerbaijan, numbering 150, to join about a thousand fighters from the other factions, headed by the Sultan Murad Division.

The Jisr newspaper quoted a private source yesterday as saying that the Azerbaijanis want to advance in the Nagori-Karabakh region at a distance of between 70 and 80 kilometers as quickly as possible, given the pressures exerted on the Azerbaijani leadership and the Turkish leadership to stop the fighting and refer to the negotiating table.

Specifically, the Turkish president would like to sit with her while they are in the best possible military position.

The source added, that about three hundred fighters out of a thousand others requested to be returned to Syria, because they were not given any opportunity to take a break from the fighting, as is usually the case on the fronts that they previously worked on, where the fighter “stationed” for a day, and rested for two or three days, to regain his strength .

Our correspondent obtained a video of the moment the arrival of a refrigerator to the areas under the control of the Sultan Murad Division, receiving the bodies of the dead, and burying them at night in mass graves.

The Armenian Ministry of Information had published a video of what it said contained scenes documenting the occurrence of a large number of Syrian fighters in an ambush, and all of them being killed or wounded.