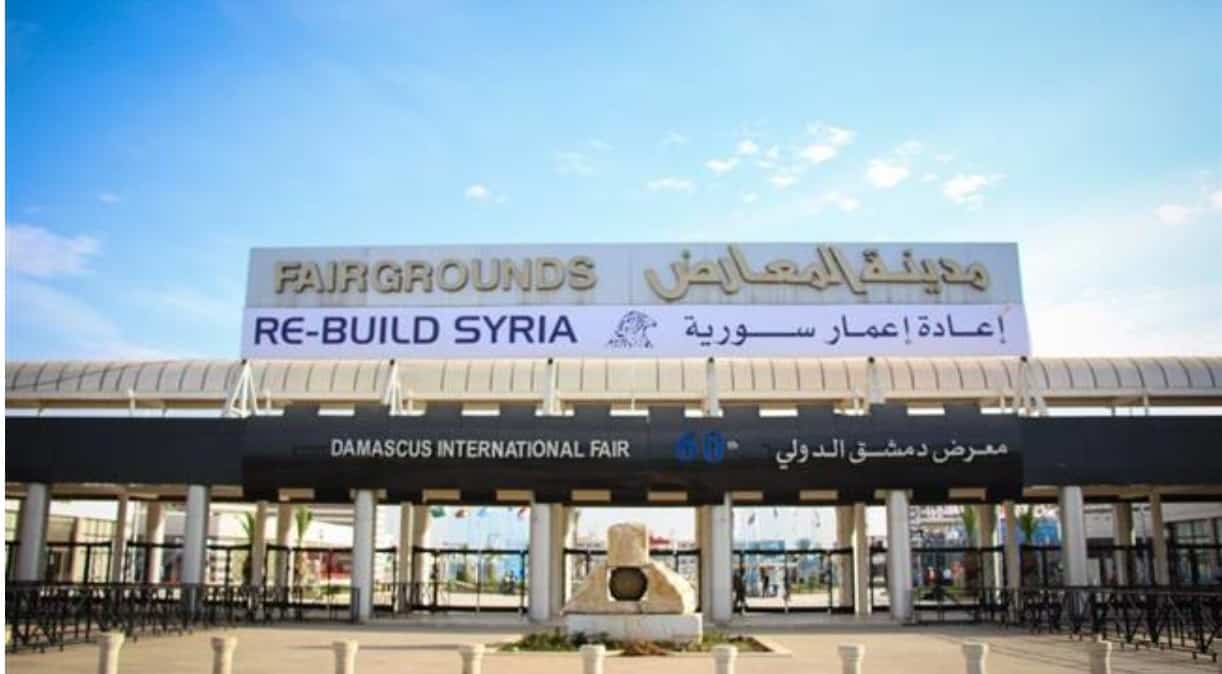 The Syria rebuilding exhibition is seen in Damascus, October 2, 2018. (Photo by Mehr)

A deputy minister says Iran is sending building materials to Syria under its “religious duty” to rebuild the Arab country, seriously damaged by years of a foreign-orchestrated war.

Iran and Syria have a free trade agreement signed in 2012 and most goods exchanged between the two major allies are not subject to taxes and customs tariffs.

The Islamic Republic is under the most draconian sanctions regime imposed by the Trump administration. Last December, US President Donald Trump signed the Caesar Act, sanctioning almost all Syrian economic and trade activities, as well as the country’s government officials.

Earlier this year, Damascus and Tehran signed a comprehensive military-security deal which a senior aide to Syrian President Bashar al-Assad hailed as the first step to overcome the sweeping US economic sanctions.

“Iran is ready for this reconstruction, and the countries that need to rebuild, build roads and dams and receive services from Iran, we have this potential and we are able to help,” he added.

Zadboom said the largest office of the Iranian Chamber of Commerce will be opened in Damascus for the first time, and mining projects and assistance to the agricultural sector are also underway in the country.

Iraq is a major trade partner of Iran despite US efforts to drive away the Arab country from the Islamic Republic orbit.

Iraq imports 1200-1500 megawatts a day of electricity from Iran, in addition to 38 million cubic meters of natural gas to power 40 percent of its electricity generation.

In addition to natural gas and electricity, Iraq imports a wide range of goods from Iran including food, agricultural products, home appliances, and air conditioners.

Washington has repeatedly extended the exemption for Baghdad to use crucial Iranian energy supplies for its power grid, for periods of 90 or 120 days, with the latest one granted in April.

Zadboom said some 70 percent of Iran’s non-oil exports are to neighboring countries, and other than those countries, the main focus is on India and China.

Iran’s most important exports in terms of value are petrochemicals and petroleum products, steel products, metals, and building materials.

Before the Syria war, Tehran and Damascus had signed important projects which were halted, most notably a $10 billion natural gas pipeline to take Iranian gas to Iraq, Lebanon, and Syria and from there to Europe through the Mediterranean.

Last year, the two countries signed a new agreement to fast-track the reconstruction of the Arab country.

Syrian Minister of Public Works and Housing Suhail Mohammad Abdul Latif said in Tehran in November 2019 that the priority for Damascus was to consign Syria’s rebuilding to friendly countries, foremost Iran.

“Our approach to rebuilding Syria is to prioritize Iranian friends,” he said.

The Syrian Housing Minister has paid a visit to Iran to discuss areas of mutual cooperation.

Abdul Latif and his Iranian counterpart Mohammad Eslami signed a document for setting up three joint construction companies to build houses in Syria.

“Iran is a top priority in rebuilding Syria, following successes in liberating our territories from terrorists which came through the bravery of the Syrian army and support of our Iranian brothers,” Abdul Latif said.

Chairman of Iran’s Chamber of Commerce, Industries, Mines and Agriculture Gholamhussein Shafei said at the time that Iranian companies would build 30,000 residential units in Syria.

More than a third of Syria’s infrastructure has been destroyed or damaged. According to the World Bank, at least $226 billion of GDP has been lost. This includes significant damage to more than a third of the housing stock and half of health and education facilities.

Reconstruction is key to restoring stability to the country, because without it Syrians’ living conditions could deteriorate and perpetuate instability.

European governments have declared that they will not bankroll reconstruction in Syria under the current administration. US and EU sanctions on Syria, meanwhile, prevent Western companies from investing in Syria’s recovery.

Hence, the Syrian government looks to friendly states such as Iran, Russia and China and its citizens living abroad to fund reconstruction.

Syrian President Bashar al-Assad has made it clear that the West “won’t be part of reconstruction in Syria, because very simply we won’t allow them to be part of it, whether they come with money or not.”

“We have enough strength to rebuild the country. If we don’t have money, we will borrow from our friends, from Syrians living abroad,” he has said.

Throughout the war, Iran has provided critical credit lines to keep the Syrian economy afloat and helped regain control of vast swathes of the country.

In 2013, Iran provided Syria with a $1 billion credit line as Damascus came under sanctions by the US and the EU amid a sharp decline in oil-related revenues and the loss of funds from taxes and enterprises in places where terrorists ruled supreme.

A second loan worth $3.6 billion came within eight months of the first for the purchase of oil products, with another $1 billion in credit line provided in 2015 to offset the sharp drop in the value of the Syrian pound.

Iran has also signed an agreement to help rebuild Syria’s electricity grid which has suffered damages of 50 percent.