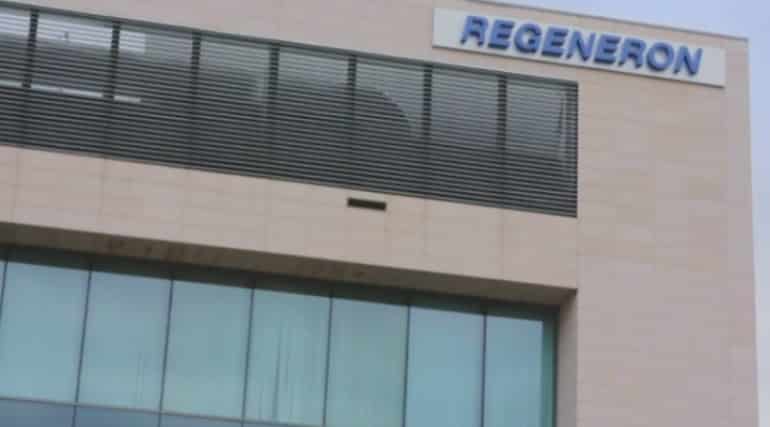 “As is the case with many other science-focused biotechnology companies, Regeneron uses a wide variety of research tools and technologies to help discover and develop new therapeutics. stem cells are one such tool. the stem cells most commonly used at Regeneron are mouse embryonic stem cells and human blood stem cells. currently, there are limited research efforts employing human-induced pluripotent stem cell lines derived from adult human cells and human embryonic stem cells that are approved for research use by the national institutes of health and created solely through in vitro fertilization.”

Guardian: New questions have emerged over the circumstances in which Donald Trump was given an experimental antibody drug cocktail produced by a golfing acquaintance to treat his coronavirus infection.

Here is the graph showing the stock ripoff where Trump and company made millions: 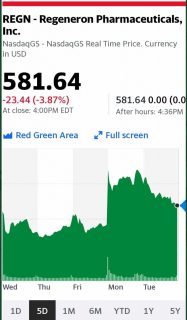 As Trump touts Regeneron as a “cure” in his latest video while saying it’ll be free for everyone (without explaining how)— The CEO is a member at Trump's golf club and his co. received $450 million in gov funding in July. Trump also recently owned shares.https://t.co/QHWZtgR4hu

As Trump wrongly hailed his treatment – which included a drug called REGN-COV2 produced by Regeneron – as a “cure”, it emerged that the company’s chief executive, Leonard Schleifer, is a member of the Trump National golf club in Briarcliff Manor, New York, and had met the president in May to talk about drugs his company was developing.

So Donald Trump just claimed Regeneron was the "cure" to Covid. We know that Trump had previously owned shares of the Regeneron stock, and the CEO is a member of Trump's Bedminster golf club. Is Trump profiteering off of Coronavirus to pay off his massive loans??

While some ethicists have defended Trump’s privileged access as president to experimental treatments, others have suggested it raises questions of fairness among other concerns, including his history of touting unproven treatments.

Trump’s relationship with Schleifer, whom he reportedly calls “Lenny”, adds to growing questions over the president’s almost exclusive access to experimental treatments unavailable to most other Americans, even as he has continued to downplay the threat of coronavirus based on his own experience.

Actually Trump's claims about Regeneron were disputed today by the CEO of that company who corrected Trump's Quack doctor. Trump has no antibodies from his CoVid infection. He has fake antibodies created by Regeneron. They'll soon go away. https://t.co/Vj1Eud0nBz

The price of Regeneron stocks – which Trump has owned in the past – soared after it was revealed the drug had been made available for his treatment and Trump stated it would be made freely available for all, although he didn’t explain how.

“I call that a cure,” Trump said in a video, adding that everyone should have access to the not-yet-approved drug and that he would make sure it was in every hospital as soon as possible.

The Regeneron spokeswoman Alexandra Bowie said fewer than 10 of these requests had been granted, and with the drug in limited supply the priority was to use it in ongoing studies. Emergency access was granted “only in rare and exceptional circumstances”, she said.  read more

Do not read this line