VT: Where does one start? First of all, the House is obligated to do this.  Nobody can serve as president while on heavy steroids.  Normal people go nuts on dexa and Trump is well below normal unless you believe his followers are normal also…and most Americans don’t.

Morning, #TeamJustice. With Pence cancelling today’s travel to return to Washington, with Trump’s dangerous- often minimally coherent – rambling yesterday, with Speaker Pelosi poised to address the 25th Amendment today, it feels like something’s coming. Could it be . . . Justice?

Guardian: Democrats in the US Congress have announced a plan to create a commission to review whether Donald Trump is capable of carrying out his presidential duties or should face removal from office.

We all know Trump is out of his fucking mind. But he’s also a walking murder weapon. McConnell, you say you’re frightened to go to the WH. What the holy fuck? SPEAK UP! 25th Amendment!

The office of the House speaker, Nancy Pelosi, announced a Friday press conference about the bill after she expressed concern that Trump, who is under treatment for coronavirus at the White House, is suffering a “disassociation from reality”.

"We're going to be talking about the 25th Amendment," Speaker Pelosi says.

“The president is, shall we say, in an altered state right now,” Pelosi said later Thursday. “I don’t know how to answer for that behavior.” https://t.co/53gemacW9j

The president has unleashed a barrage of erratic and self-contradictory tweets and declarations in recent days that have left staff scrambling and raised concerns over his stability.

In a zig-zagging interview on the Fox Business channel on Thursday, his first since being hospitalised, Trump, 74, boasted: “I’m back, because I am a perfect physical specimen and I’m extremely young. And so I’m lucky in that way.”

Nancy Pelosi plans to task a commission of psychiatrists and physicians with reviewing whether Trump is mentally fit to remain in office.

It's the first step of a never-used removal process spelled out by the 25th Amendment.https://t.co/cOi058iOZi

Pelosi, who is negotiating a Covid-19 economic stimulus plan, responded at her weekly press conference: “The plan isn’t for the president to say that he’s a perfect physical specimen. Specimen, maybe I can agree with that … And young, he said he was young.” 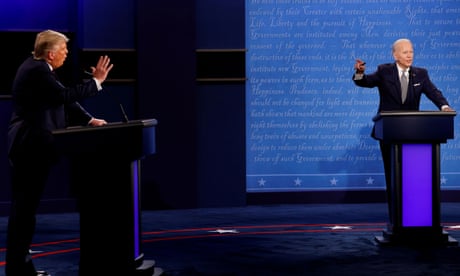 Donald Trump suggests veterans’ families could have given him Covid

Trump “is, shall we say, in an altered state right now” and “the disassociation from reality would be funny if it weren’t so deadly,” the 80-year-old speaker added while wearing a mask.  read more