by Valerie Kulikov, with New Eastern Outlook, Moscow, …and the Institute of Oriental Studies of the Russian Academy of Sciences, a research institution for the study of the countries and cultures of Asia and North Africa

[ Editor’s Note: The refugee immigrant situation has grown out of control because it serves the interests of both political and criminal entities, where it can be hard to tell the two apart. But when they are both, like the Trump regime, it is easy.

Take Syria for example. When I was there as an election monitor I was surprised to learn that the country had banked a lot of its oil income for a rainy day fund for its free medical and education programs, including college.

Men getting degrees, even in medicine, to escape having to go into the army, were heading off to Europe to find work and then be a financial lifeline for their family. Every family was out for itself, which is not unusual in the endless war scourge.

The flood of illegal immigrants is a cash cow for the fake passport makers, at $1000 a pop, something that no starving refugee could ever pay.

The coronavirus situation has made this chaotic situation worse, as I doubt these people are practicing social distancing, or going through quarantine before they pay a smuggler to get them to the southern EU.

Real refugees can obviously be supported without all the suffering and deaths in their own home countries at a much lower cost. Yet that obvious solution never seems to get much publicity, even though the UN had supported refugees this way forever.

Why does the UN proven method get treated like no one knows about it? There is only one reason. They have the funds to get out, while the real impoverished refugees do not.

There is no system for taking the most needy because some powerful interests prefer having the chaotic system we have now, so they can exploit it, yet I have not heard of a single criminal case to combat it… Jim W. Dean ] 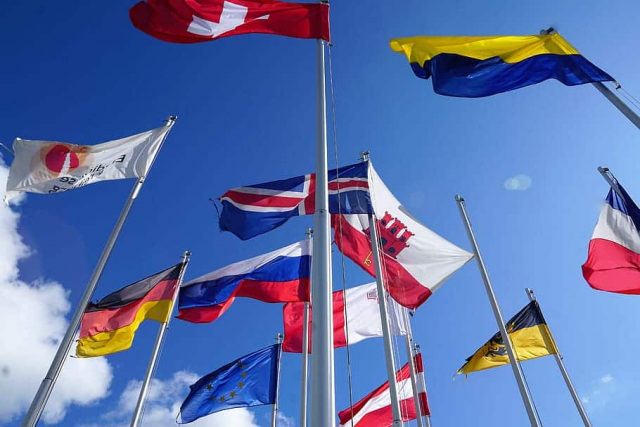 Numerous expert opinions from European organizations attest to the fact that the massive, illegal influx of immigrants into Europe will not stop in the near future, but will only continue to grow.

Western countries consider it to be perfectly normal when people flee their own countries in search of a better life, especially when violence and corruption reign supreme there.

Nevertheless, an awareness of what is causing the illegal migration disaster that has gripped Europe in recent years is increasingly swaying the European public to believe that the United States is largely to blame for the current deplorable situation with this issue.

Specifically, the publication The Independent directly points that the root cause of this development lies in the fact that since 2001 the US has been waging 8 wars in various countries, and because of that 37 million people have become refugees and internally displaced persons.

And all 8 of these conflicts are still raging, despite the fact that they have been persisting for many years. For example, in Syria alone there are 5.6 million refugees, but there are also 6.2 million internally displaced persons that are just fighting to survive.

And, although Assad won the war in Syria in 2017, Western countries still want to remove the current legitimate leader of this country, so they continue to maintain the conflict in its “hot stage”, with the Syrians serving as the “cannon fodder”, according to the newspaper.

Brown University experts estimate that 37 million people have fled their homelands as a result of the eight wars in which the United States has fought since 2001: in Afghanistan, Iraq, Syria, Yemen, Libya, Somalia, northwestern Pakistan, and the Philippines. These unprecedented figures are downright shocking, since in recent history only WWI and WWII have caused this kind of comparable large-scale migration.

However, not only the United States is responsible for the current situation, because the war in Libya was started by Great Britain and France in 2011 under the pretext of “saving the people from Gaddafi.” As a result, chaos started to dominate the country, and it turned into open floodgates through which residents in North Africa attempt to infiltrate Europe.

The West cannot resolve the problems that is has caused, and rushes back and forth from one extreme to the other. Large-scale, illegal immigration into Europe will not stop, but will only keep growing, thanks to politicians and activists working at nonprofit organizations, Czech media outlets report.

Immigrants see that Europe is incapable of not only defending its borders, but responding to blackmail and pressure, so they will keep up the attempts to conquer this “European paradise”. The situation surrounding the burned camp at Moria on the Greek island of Lesbos is demonstrative in this instance.

However, the situation in Greece overshadowed the long-standing crisis in the Middle East, and along the coast of Libya, where nonprofit organizations use their vessels to take illegal immigrants on board and then across the Mediterranean to European, mainly Italian, ports of call. European politicians criticize this behavior to the greatest possible extent, but are not taking any real measures against it.

The Italian L’Espresso mentions that troubles with refugees long ago turned into a source of income for various criminal groups. The UN Secretary General visited Libya in 2019, and was shocked by how people suffered there who were accommodated at the temporary detention center for immigrants, and who earn a lot of money for criminals. First, by the people trying to leave the country at all costs, and second, by the funding from Europe that has turned these torture camps into an ATM.

In September, the UN issued a detailed report in which it openly accuses the local and federal authorities in Libya of participating in human trafficking. The report states that wherever fighting is going on, and no matter who is in charge of the ministries, militia groups that are involved in human trafficking will find ways to get their hands on the significant flow of funding associated with migrant detention centers.

One real headache for the Italian Minister of the Interior is not only the concerted efforts by nonprofit organizations to bring in illegal refugees from Libya – they at least manage to pass them through quarantine measures. The real bane this summer has been the more frequent arrivals of immigrants “flowing in on their own accord”.

For example, criminal businesses have established a transit route from Tunisia to Sicily: those fleeing from what not so long ago used to be an exemplary democracy in the Maghreb, but whose economy has collapsed under the blow of the novel coronavirus, are very resourceful in their desire not to get caught by the Italian authorities, and try to disguise themselves as tourists.

The immigration crisis of 2015 sparked a lot of controversy within the EU, and its consequences are still reverberating, Ursula von der Leyen, the President of the European Commission, admitted the other day, announcing the European Union’s intention to update its immigration policies by adopting a new immigration pact.

She explained that the EU will clarify its position on the issues of granting asylum rights and repatriating immigrants, take measures against those involved in the illegal transportation of refugees, bolster security for the EU’s external borders, and intensify cooperation with third countries on immigration issues to help open up legal immigration routes. “In addition, we will ensure that people who are granted the right to stay are integrated, and feel welcome,” said the head of the European Commission.

According to the German TV channel Das Erste, Brussels was forced to take this kind of step to somehow cope with the problem of immigration, which has become very serious due to the selfishness of many individual EU member countries.

However the ideas that Ursula von der Leyen is trying to foist on the EU are not being met with widescale approval. In particular, as noted by German media, in contrast to Germany, which favors admitting migrants, in Eastern Europe the opposite idea has arisen, with a good Hungarian or Pole considered to be one who is not in favor of letting anyone in.

But along with that, some of Brussels’ proposals on immigration seem unrealistic, even for the Germans. One example is the idea that countries that do not take in refugees should arrange for the deportation of those who have been refused asylum.

A new opinion poll by Gallup, Inc. (headquartered in Washington) showed that the attitude toward immigrants around the world has become worse. According to the poll’s results, Europe is the least welcoming to immigrants, and in this respect North Macedonia, Hungary, Serbia, and Croatia stand out.

According to a study conducted in 2019 using the Migrant Acceptance Index, Slovakia was also included in the list of countries whose residents are the least tolerant of migrants (it should be recalled how Bratislava still rejects the EU’s mandatory quotas for the admission of immigrants).

And all of these problems will not go away while 37 million refugees remain. To deal with them successfully, an end needs to be put to these conflicts so that the refugees can go back home.