by Viktor Mikhin, …with New Eastern Outlook, Moscow, and the Institute of Oriental Studies of the Russian Academy of Sciences, a research institution for the study of the countries and cultures of Asia and North Africa.

[ Editor’s Note: Viktor gives an analysis of Erdogan’s expansionist policies and the destabilization that it is causing. He weaves in the drama Erdogan’s policy has on an already depressed Turkish economy and its exchange rate.

Failed foreign aggressions have taken a lot of historical leaders down, and maybe with a bit of luck, Erdogan’s name will join that list. He is juggling the US, Russia, the EU, Syria, Ukraine, Libya, Iraq, Greece, the Eastern Mediterranean, and now Azerbaijan.

What does he have to show for it? So far he has been maintaining military support by being careful to keep them out of combat as much as possible, via the heavy use of Muslim jihadis and forlorn refugees in the camps willing to take any risk to get a few dollars in their pockets. Many have already died in Libya.

Viktor points out below that Erdogan has also been cracking down on the press to keep public opposition to a minimum, primarily via the harrassment and prosecution of journalists for releasing state secrets.

These are not good days to be a war correspondent, brave enough to report what is really going on, and why.

VT has a list of bans and blocks and delinkings to show the press bullying machine has become a well oiled machine. But where Erdo may feel he has some power to keep Turkish citizens in the dark about to his machinations, the rest of the world is more fortunate.

VT has covered him extensively over the years and intends to keep doing so, as he is the Neo-tyrant gift that keeps on giving. We heard tonight that the Armenians are back in talks with the EU over a more formal ‘association’.

That would be a slap in the face of Mr. Erdogan, as he has gotten the stiff arm from the EU for his ‘refugee terror war’ threats after Turkey was not allowed into the EU with a free trade deal. But Erdogan has no one to blame but himself… Jim W. Dean ] 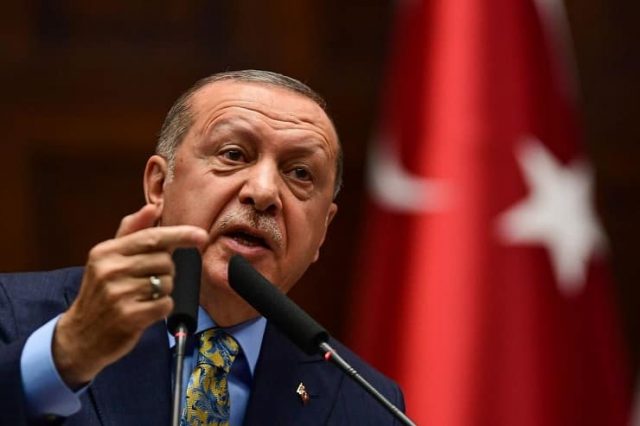 Turkey’s great, imperial past, and the ideas associated with neo-Ottomanism, are quite popular and widespread in various strata of Turkish society. This all forces its political elites, and the country’s leadership, to proceed from the point of this sociopolitical dream, and act more decisively to try to revive this project of neo-imperialism.

This course, as politicians see it, start to encompass a greater portion of the provisional “Ottoman legacy”, gradually expanding Ankara’s sphere of influence and strengthening Turkey’s position as a powerful regional leader.

It is enough to just take a look at the latest world news to immediately stumble upon the active, aggressive actions taken by Ankara in Libya, Syria, Northern Iraq, Greece, Cyprus, and in the Mediterranean region. They are now being augmented by Erdogan’s completely irrational policy in the crisis surrounding Nagorno-Karabakh; Turkey is also expected to ramp up its activity in Moldova and Ukraine.

Turkey ready to support Azerbaijan in negotiations and on battlefield, Turkish Foreign Minister Mevlüt Çavuşoğlu stated. Turkey has transferred 1,500 militants from Syria to Azerbaijan, who are already taking part in the armed conflict with Armenia, reports the Telegram channel WarGonzo. This means fighters from the Idlib pro-Turkish groups, and, in particular, the Sultan Murad Division.

It is reported that these militants “proved themselves” after shelling Christian neighborhoods in Aleppo, and participating in war crimes. Syrian intelligence services are convinced that from 2015 to 2016 several thousand peaceful Syrians could have fallen victim to the Sultan Murad Division. Also, fighters from this formation took part in the war against Kurdish groups.

Along with that, Turkish authorities are blocking citizens’ access to truthful information about the president’s expansionist course, and the gross errors he is committing in pursuing this foreign policy course. For example, the government is censoring local publications that broadcast stories about the expansion in Libya, the Arab media outlet Libya24 reported.

Access to the Yeni Yaşam newspaper was cut off without any official explanation. The publication believes that the decision is associated with high-profile news items about the death of a member of the Turkish intelligence services who died in the North African country.

It’s worth noting that a number of journalists who have reported on Ankara’s operations in Libya have been convicted of “disclosing classified information”.

Those include Mehmet Ferhat Çelik, the editor-in-chief of Yeni Yaşam, and staff members at the Turkish TV channel OdaTV, which was the first one to disseminate information on Turkish President Recep Tayyip Erdoğan being complicit in the crisis in Libya.

Quite a few world media outlets have already reported on representatives from the Turkish press being put on trial, and facing prison sentences ranging from 8 to 17 years. However, in September this year these journalists were acquitted, and then released from custody. But due to their criticism of Erdogan’s policies, yet another 80 people could wind up in prison.

It is only natural that such an unreasonable, reckless policy would be negatively reflected in Turkey’s daily newspapers, especially those that oppose the ruling Justice and Development Party (AKP), which is led by President Recep Tayyip Erdoğan.

That is not surprising, given how painfully aware critics are of the fact that the problems that plague their ailing economy are no longer purely structural, but are increasingly rooted in a doomed foreign policy of aggression. It is this course initiated by the government that even Turkey’s NATO allies, and former regional partners, have come to see as the driving force behind the current Turkish president pursuing an expansionist program.

Meanwhile, the Turkish government’s fiscal policy has sparked growing concern from international financial institutions and economic experts; they fear that the Turkish economy will decline even more if politicians do not make some courageous decisions.  Under these circumstances, Turkey’s Central Bank both flabbergasted and encouraged investors by raising its key rate for the first time in two years.

Economists say that the weekly hike in the repurchase agreement (repo) rate from 8.25% to 10.25% has also helped the bank to restore some of the boundaries for its financial policy. The bank tried to use discrete measures involving hard currency support like changing the overnight borrowing rate to avoid an official increase in the base interest rate.

But this kind of approach did not stop the lira from losing 22% of its value against the dollar this year, and becoming one of the worst emerging market players in the world.

“Massive surprise, and positive,” said BlueBay Asset Management analyst Timothy Ash. The last time Turkey raised its key interest rate, in September 2018, was amid a currency crisis instigated by a sharp deterioration in relations with the United States.  Economists attribute the current recession to Turkey’s foreign policy failures, the coronavirus pandemic, and a sharp drop in Turkey’s foreign exchange reserves.

The ratings agency Moody’s figured that the Turkish Central Bank’s attempts to bolster the lira have caused Turkey’s dollar and euro reserves to fall to a 20-year low. Owing to this, the agency further downgraded Ankara’s sovereign credit rating to the junk-level rating of B2. The government has nearly depleted the reserves that would have allowed it to avert a potential balance-of-payments crisis, Moody’s warned.

The Central Bank stated that it “decided to increase the policy rate by 200 basis points to restore the disinflation process and support price stability.” Incidentally, inflation rose to 11.77% in August, and has remained above 10% over the past few years. This means that Turkish bank deposits and bonds are depreciating over time as inflation exceeds the base interest rate.

The Central Bank linked its decision to concerns about inflation, Capital Economics analyst Jason Tuvey wrote in a research note.  But any shift in monetary policy has always depended on fluctuations in the exchange rate for the lira.

The analyst noted that increasing the rate could help push the average financing cost toward 12% in the coming months, which is just above inflation, and perhaps enough to save the lira from a further decline.

The apparent setbacks in foreign and financial policy somewhat sobered the view held by President Recep Tayyip Erdogan, who called for the Eastern Mediterranean to become a “pool of peace” again on September 28th, and said he believed that the stakeholders involved could figure out a formula that was mutually beneficial.

That is all fine, but these are just ordinary words designed to camouflage the expansionist, aggressive policy of Tayyip Erdogan. His latest actions and words concerning the crisis around Nagorno-Karabakh quite clearly demonstrate that the Turkish President continues to handle his blunders, and Turkey’s problems, in keeping with an old pattern: from a position of strength and foolhardiness.