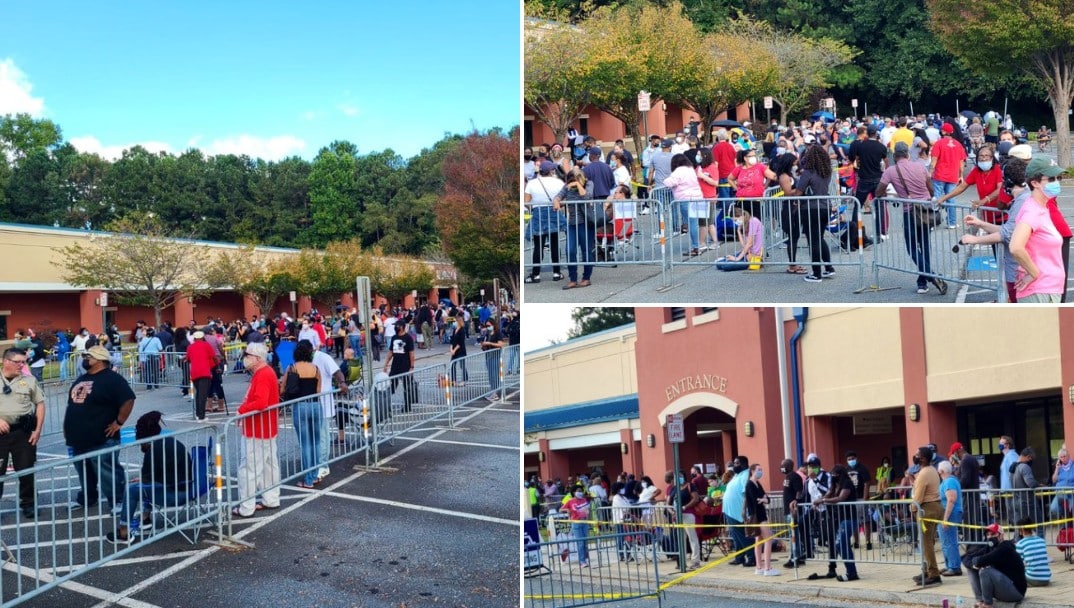 Night has fallen, but voting lines continue in Marietta, Georgia. The @WCKitchen team just finished serving dinner. They met someone walking out who arrived at 8am — he waited 12 hours to vote today. We must do better! Until then, #ChefsForThePolls will try to keep everyone fed. pic.twitter.com/RcnG8BFSWW

Kemp is trying to steal the election in Georgia. Look at these early voting lines. Absolutely ridiculous. #VoteBiden pic.twitter.com/LIypMhYOXK

Georgia, where at least two counties had problems with electronic pollbooks, is latest state to see extremely long lines on first day of in person voting

Voters in Georgia faced hours-long lines on Monday as people flocked to the polls for the first day of early voting in the state, which has developed a national reputation in recent years for voting issues.

Voters waited in line for up to five hours across the metro Atlanta region and surrounding suburbs on Monday to cast their ballots, with many locations in the state's most populous counties reporting high turnout on the first day of early voting. https://t.co/J3xJaNx76x

Eager voters endured waits of six hours or more in Cobb County, which was once solidly Republican but has voted for Democrats in recent elections, and joined lines that wrapped around buildings in solidly Democratic DeKalb County. They also turned out in big numbers in north Georgia’s Floyd County, where support for Donald Trump is strong.

Race is one of the strongest predictors of how long a person waits in line to vote, research shows. https://t.co/DalFAimMdS

At least two counties briefly had problems with the electronic pollbooks used to check in voters. The issue halted voting for a while at State Farm Arena, in Atlanta. Voters who cast their ballots at the basketball stadium, which was being used as an early voting site, faced long waits as the glitch was resolved.

Adrienne Crowley, who waited more than an hour to vote, told the Atlanta Journal Constitution there wasn’t anything that would make her get out of the line to vote. “I would have voted all day if I had to.”

There are reports and videos of extremely long lines at early voting sites in Georgia today.

This is racist #VoterSuppression

WATCH this clip from our film "Suppressed 2020" and see the difference between voting in black neighborhoods versus voting in white neighborhoods. pic.twitter.com/KcjDN8yPXq

Elsewhere in Atlanta, some voters reported waiting more than 10 hours for their chance to cast an early ballot.

A technical glitch at a voting supersite, hours-long lines, and a last-minute court ruling marked the start of in-person early voting in Georgia, a presidential battleground that will also play a huge role in deciding which party controls the Senate https://t.co/NYwJYiJOcZ

Voters began lining up outside polling stations in the predawn hours, some using their cellphone flashlights to help other voters fill out pre-registration forms, according to the Atlanta Journal Constitution.