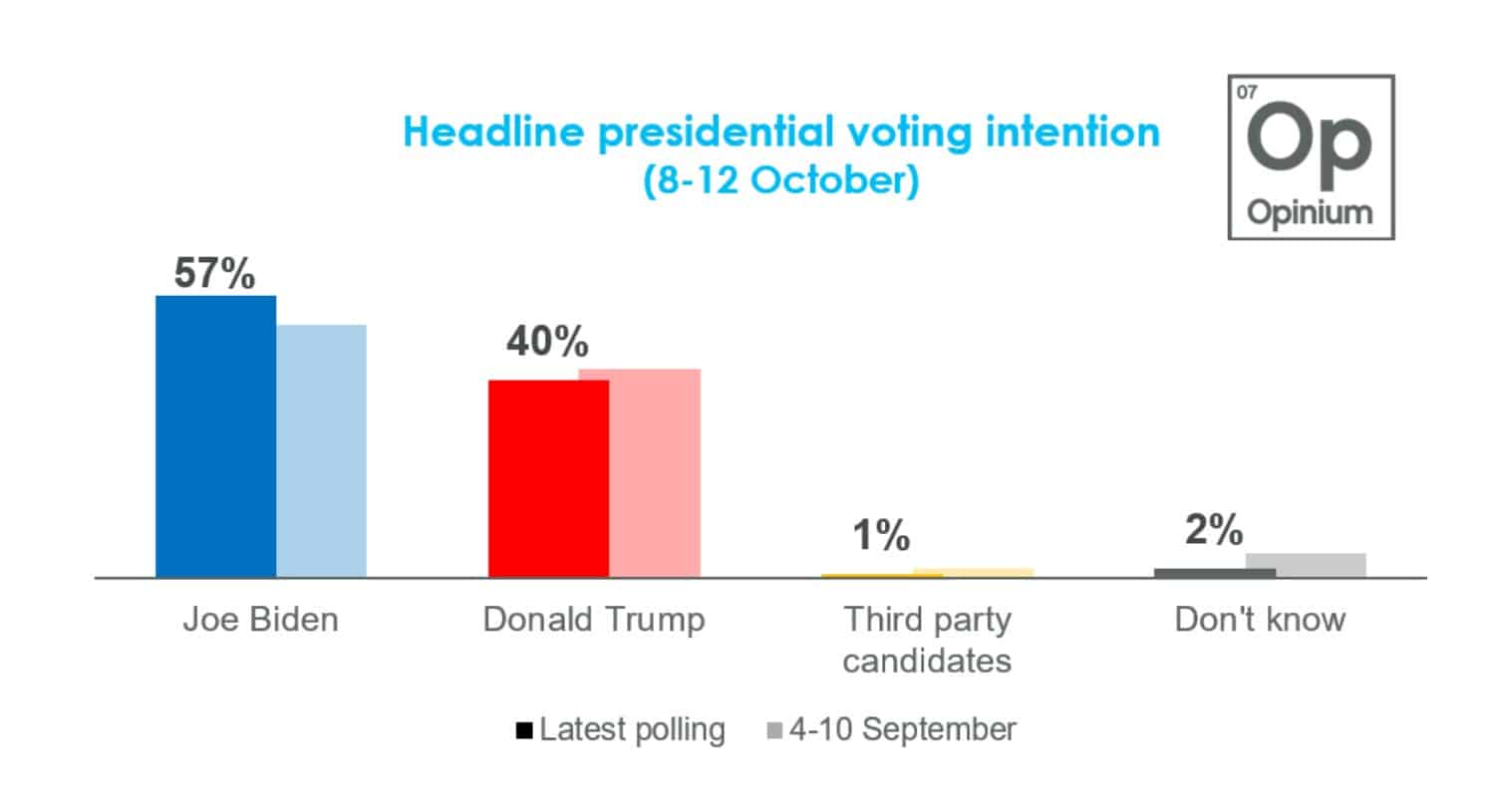 Democratic presidential nominee Joe Biden’s lead over Donald Trump has surged to a record 17 points as the US election enters its final sprint, an Opinium Research and Guardian opinion poll shows.

Some 57% of likely voters intend to vote for Biden, while just 40% say they will vote for the incumbent president, the survey shows.

Chance of winning the most votes:
Biden 99%
Trump 1%

Even if Biden wins by the margins suggested by the polls, future generations are going to find it absolutely disgusting that Trump was even remotely competitive at this stage in his presidency. The stain will be that 40 to 45% of Americans approved of his despicable conduct.

The 17-point gap is even bigger than than 57%-41% margin found by CNN earlier this month. It is just short of the lead in the popular vote that Ronald Reagan enjoyed in his second landslide victory in 1984.

Joe Biden leads in Wisconsin and Michigan by a significant margin, according to new Times/Siena polls.
Biden leads Trump by 10 in Wisconsin, 51 to 41 percent.
Biden leads by 8 in Michigan, 48 to 40https://t.co/olAsCQgqYp

With election day just three weeks away and millions of votes already cast, some Republicans fear a rout in the races for the presidency, Senate and House of Representatives. Ed Rollins, who advises a pro-Trump super political action committee, told the New York Times: “The president’s political environment is terrible. It’s an uphill battle.”

Asked by the Times if Trump can still turn things around, Rollins replied: “It’s cooked.”

Opinium’s findings for the Guardian suggest that a hectic month that saw the death of the supreme court justice Ruth Bader Ginsburg, Trump’s disastrous debate performance and a White House outbreak of coronavirus that infected the president himself swung the pendulum decisively in Democrats’ favour.

Biden has gained five percentage points among undecided voters since September. Democrats also injected momentum into existing supporters, with voters for Biden now more likely to turn out, up from 75% in September to 82% this month.

The former vice-president now leads on healthcare, race relations, jobs and even the economy (45% to 43%), usually seen as Trump’s signature issue. His reputation as a successful businessman took a hit from a New York Times investigation into his tax affairs.