[ Editor’s Note: Here we go again with another White Helmets attempted chlorine attack to stir things up against the Assad regime. One would think that with their track record they would stay away from the staged gas attacks.

But then on the other hand, when you have built in support from the US, Turkey, and maybe NATO, what’s to lose? The jihadis have never been punished for the one in the past, which VT has chronicled over the years.

And god help us if the Organization for the Prevention of Chemical Weapons is brought in, given their horrible record going along with whatever Western intel wants to pull their strings.

Could this be Israelis pulling a string to do a favor by giving Trump one more shot at bombing Syria before the election to show what a tough guy he is?

It would not be the first time. But General Miley might not go along with a pre-election charade.

I feared that with much of Idlib remaining in Jihadi and Turkey’s hands it would become the festering wound it has, with Russia not wanting to get into a major military move at this time. Hence the militants are wanting to get the spotlight… Jim W. Dean ] 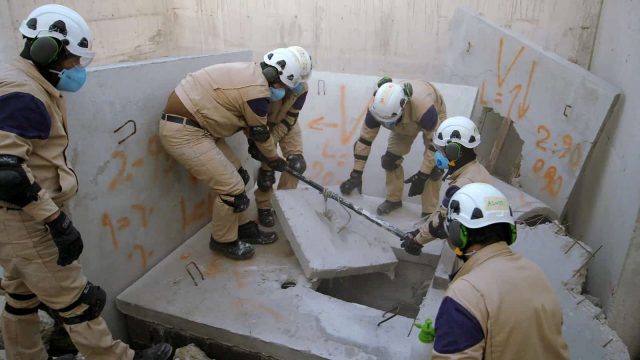 According to Russian military officials in Syria, Islamic militants in Idlib Governorate have delivered several barrels of chlorine to the White Helmets in preparation for a new provocation.

On Tuesday, Rear Adm. Alexander Grinkevich, deputy head of the Russian Defense Ministry’s Center for Syrian Reconciliation, reported in a daily briefing that the center had evidence Islamist rebels in Idlib were preparing a new provocation using chlorine in Sfuhon, a village in southern Idlib Governorate.

“The Russian Reconciliation Center has received information about the preparation by militants of illegal armed groups of another attempt to organize a provocation using poisonous substances in the southern part of the Idlib de-escalation zone to accuse the Syrian government forces of using chemical weapons against civilians,” Grinkevich said.

He added that the White Helmets, a group with known links to al-Qaeda and other terrorist groups fighting against the Syrian government, had also arrived in Sfuhon.

Tuesday’s report is just the latest incident of rebels in Idlib attempting to stage such an incident. Supposed use of chemical weapons in the civil war by Damascus has repeatedly been used by Western powers as an excuse to attack the Syrian government, either through international pressure or airstrikes.