Guardian: US militias forge alliances with conspiracy theorists ahead of election

“Not only have many of these Michigan pages and groups been on Facebook for years, the Facebook algorithm actively recommended other militia-related groups and pages to join, allowing each page and group to expand their reach.”
https://t.co/ZcsOZhZ54q

⚠️Attention⚠️ Militias and armed groups are mobilizing on Facebook. This is happening now. In plain sight. They must be stopped. Join us 10.15.2020 at 12:00PM ET for our emergency meeting with America’s leading civil rights voices and experts on militia violence. pic.twitter.com/fHIObmvHKP

Armed militia groups are forging alliances in the final stages of the US presidential election with conspiracy theorists and anti-vaxxers who claim the coronavirus pandemic is a hoax, intensifying concerns that trouble could be brewing ahead of election day.

NOW, can Twitter, Facebook & all other platforms now take down all the psychotic armed militia wing-nuts plotting Civil War?

Leading advocates of anti-government and anti-science propaganda came together at the weekend, joined by the founder of one of the largest militia groups. The rare connection occurred at the Red Pill Expo, a conference convened on Jekyll Island, Georgia – a symbolic location as it is the birthplace of the US Federal Reserve, a popular bogey figure for conspiracy theorists.

The summit, staged indoors in front of a packed and maskless audience of about 350, was headlined by Stewart Rhodes, president of the Oath Keepers.

The militia, which turned up menacingly at several Black Lives Matter (BLM) protests over the summer and has acted as a vigilante squad at numerous Donald Trump campaign rallies, has links to 25,000 current or past members, mostly military or police veterans. 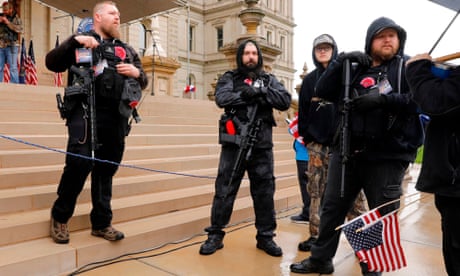 Michigan terror plot: why rightwing extremists are thriving on Facebook

Rhodes aroused the crowd of “Red Pillers”, as they called themselves, with incendiary language. He denounced BLM as a “communist front” and encouraged attendees to seek training in firearms and militia activity as the election approaches.

“You are your own self-defense,” he said. “You must organize yourselves in the next 30 days in your towns and counties. We have members in every state in the union and we are standing them up right now.”

Michigan terror plot: why rightwing extremists are thriving on Facebook

The platform provides tools for radicalization and coordinated violence, and critics say it’s been slow to ban dangerous groups

In a year of escalating political violence in the United States, Facebook has served as a key organizing tool for violent extremists.

An alleged plot to kidnap the Michigan governor, Gretchen Whitmer, was planned in part on Facebook, with one leader of the scheme broadcasting a video of his frustrations with Whitmer to a private Facebook group, and participants later sharing footage of their paramilitary exercises and bomb-making training, according to an FBI affidavit. 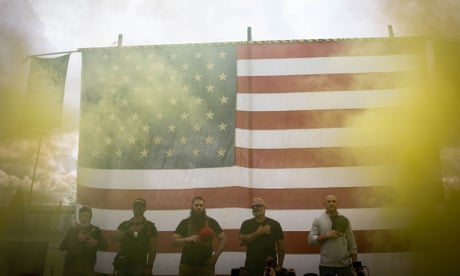 I wrote about Facebook’s QAnon purge, the political ad ban & militia pages and how it’s recent actions are a tacit admission that what is good for Facebook is, on the whole, destabilizing for society. https://t.co/7IXnPrDsRf pic.twitter.com/QFsXDQZ1Fe

Before Michigan, there was the militia group in Kenosha, Wisconsin, that used a Facebook event to encourage armed citizens to take to the streets, and the anti-government “boogaloo” cop-killer in California this May allegedly met his accomplice on Facebook.

The deadly neo-Nazi rally in Charlottesville, Virginia, in 2017, was originally organized as a Facebook event.

"While dangerous groups can and do organise across many different platforms, Facebook is “uniquely dangerous” because it is designed for “algorithmic recruitment”.

Terrific piece by @loisbeckett @guardian on why FB is the militia's place to gohttps://t.co/ThyM773jmG