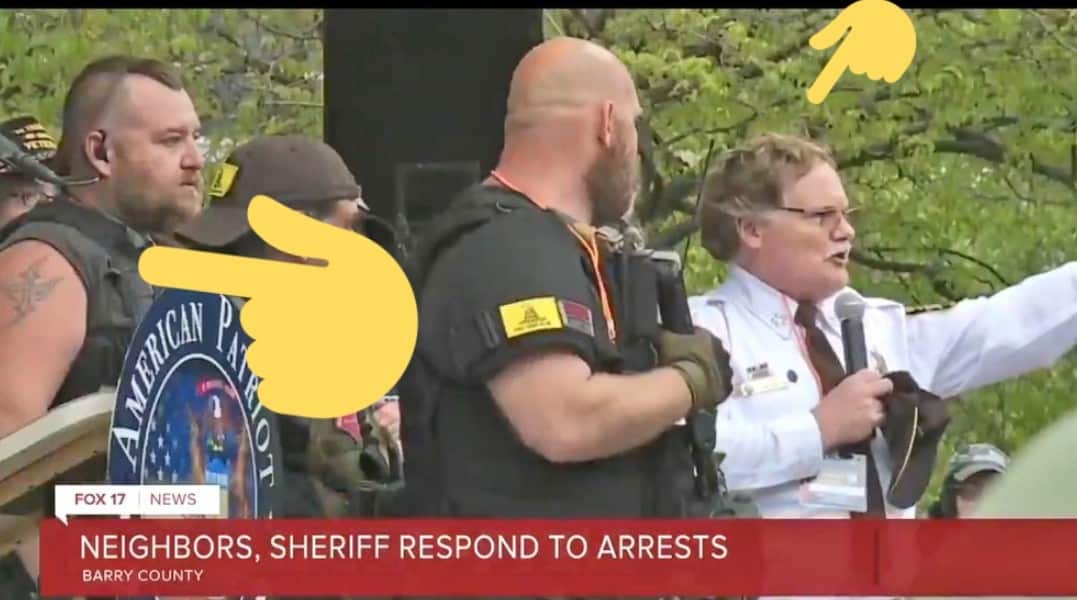 Detroit News: The Michigan Sheriff’s Association has condemned comments by the Barry County sheriff that appeared to defend the 13 men who were arrested on allegations that they planned to kidnap Gov. Gretchen Whitmer, storm the Capitol and try to start a civil war.

Talk to your neighbors

Every community needs to talk about cleaning this up @barrychamber pic.twitter.com/ELheJxt7Js

Sheriff Dar Leaf’s comments were “dangerous” and nothing about the alleged actions of the 13 individuals should be understood to be “legal, moral or American,” wrote Matthew Saxton, executive director and CEO for the Michigan Sheriffs Association.

Maybe Sheriff Dar Leaf shouldn't be a sheriff any more if he thinks it's OK for terrorists to kidnap a duly-elected Governor of his state. https://t.co/yAEncDFPbw

“It is, frankly, disheartening that any law enforcement official with any time in service of his or her oath could respond that way,” Saxton wrote in a Tuesday open letter that also thanked state and federal investigators involved in the case.

Leaf did not immediately return a call seeking comment.

The statement comes four days after Leaf — who appeared on stage with some of the suspects at a May rally — told Fox 17 the individuals had been “nice and respectful to him” and deserved a fair trial.

No doubt the FBI is all over this little cowardly Sheriff

Kudos to Barry County Prosecuting Attorney Julie Nakfoor-Pratt for making this clear, concise and responsible statement about Sheriff Dar Leaf. One man alone-even the elected sheriff-does not speak on behalf of the entire county. https://t.co/VqpvwwVmEn

“I was shocked. I did not see this coming for those guys,” Leaf said about the charges against Michael Null, 38, of Plainwell and William Null, 38, of Shelbyville.

Let us take a look at Barry County Michigan Sheriff Dar Leaf. He shared a stage with William Null. pic.twitter.com/wODMRhOOwG

“A lot of people are angry with the governor and they want her arrested. So are they trying to arrest or was it a kidnap attempt?” he said, arguing that their plot may have been allowed under a citizen arrest statute.

“It doesn’t say if you’re in elected office that you’re exempt from that arrest. I have to look at it from that angle and I’m hoping that’s more of what it is,” he said.  read more