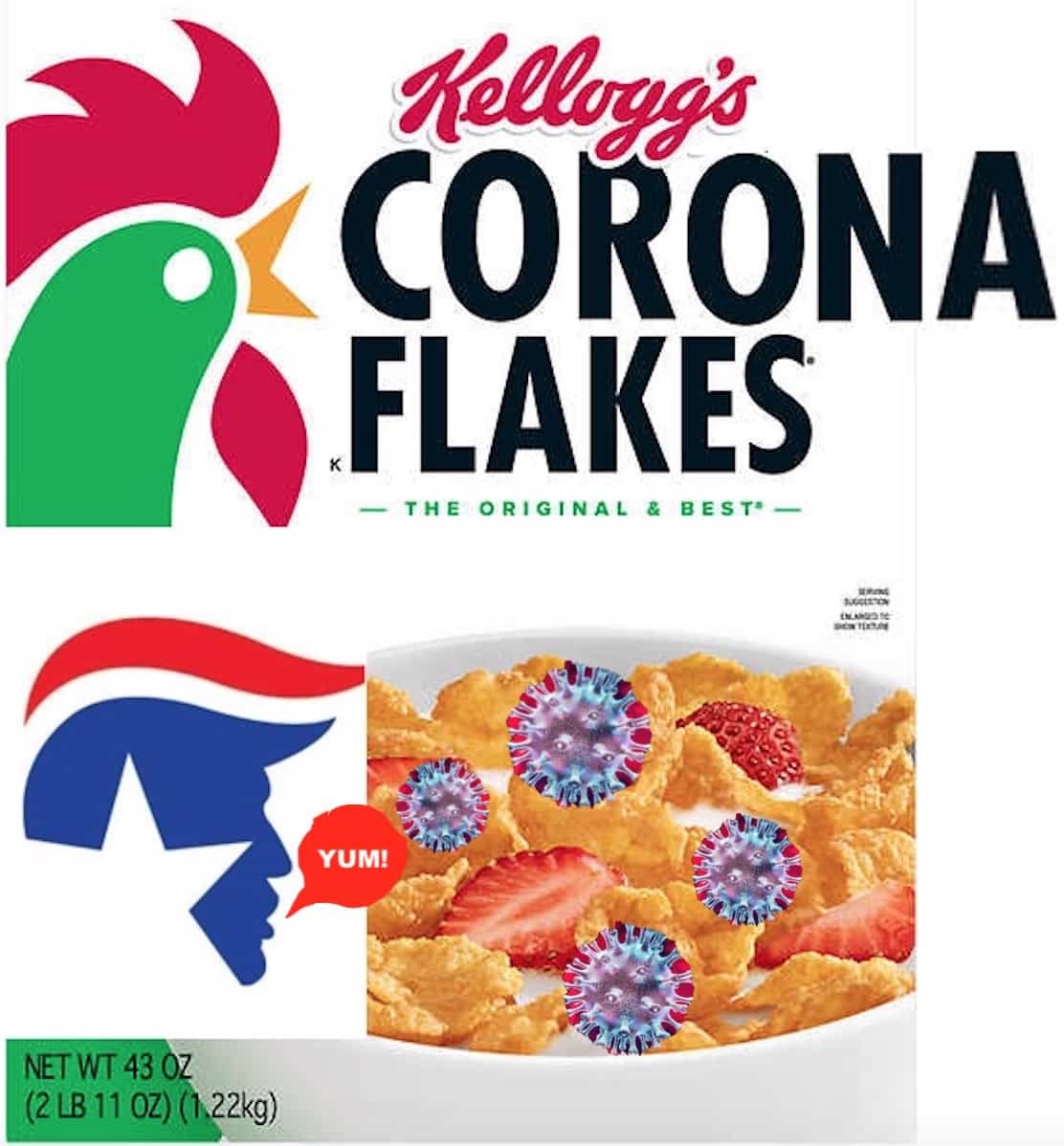 President Donald Trump has announced his new “herd immunity” plan to defeat the pandemic: A breakfast cereal made of GMO corn, high-fructose corn syrup, COVID-19 virus, and glyphosate and other artificial flavors. 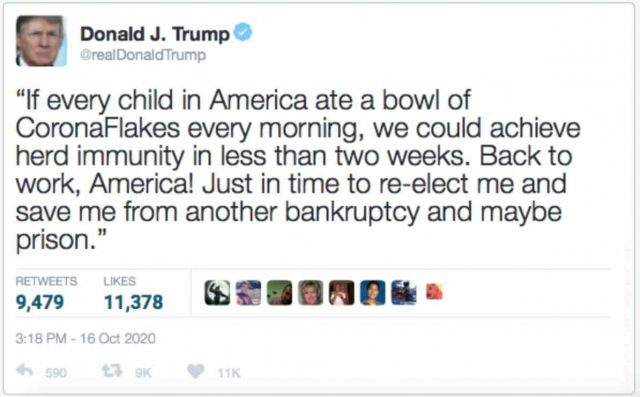 “If every child in America ate a bowl of CoronaFlakes every morning,” the President tweeted yesterday, “we could achieve herd immunity in less than two weeks. Back to work, America! Just in time to re-elect me and save me from another bankruptcy and maybe prison.”

The herd-immunity-through-cereal strategy was drafted by Trump’s new science advisor, self-taught virologist and defrocked gynecologist Dr. Buster Hymen, inventor of the Alex Jones male potency enhancement supplement. Dr. Hymen, standing beside Trump at the CoronaFlakes product launch, grabbed the microphone from Trump, wiped it down carefully with a gasoline-soaked rag, and explained: “Unlike old fashioned Corn Flakes, breakfast of geezers, Sugar-Frosted CoronaFlakes is sweet enough to appeal to kids! It’s full of sugary purple COVID-berries that look just like those models of the coronavirus we’ve all seen. If we feed this stuff to every kid in America, they’ll all catch COVID-19, and hardly any of them will die. Then they’ll pass it on to their parents, and most of them won’t die, either. By the time it gets to the grandparents, herd immunity will have kicked in, so most of the old farts survive too. It’s a win-win-win!”

Each box of CoronaFlakes will include a special prize for the lucky kid who opens it. Among the fun prizes: A toy hypodermic needle loaded with COVID that works just like the real thing, so kids can “vaccinate” each other with the novel coronavirus while playing doctor; little plastic models of Trump, Tony Fauci, Buster Hymen, and other corona superheroes; and cheap worthless polyester cloth “herd immunity” masks with the CoronaFlakes logo imprinted on them.

White House sources say the President plans to call on the military to deliver a box of CoronaFlakes to every child in America beginning next week. Like vaccinations, CoronaFlakes will be mandatory, with no religious, philosophical, or basic sentience objections allowed.

The sources also say Trump is hoping that even if herd immunity fails and he loses to Biden, he and Jared Kushner will make enough money from the expensive new mandatory breakfast cereal to pay off their 500 million dollar debt, start a new reality show, and hopefully burn the Reichstag and return to power.