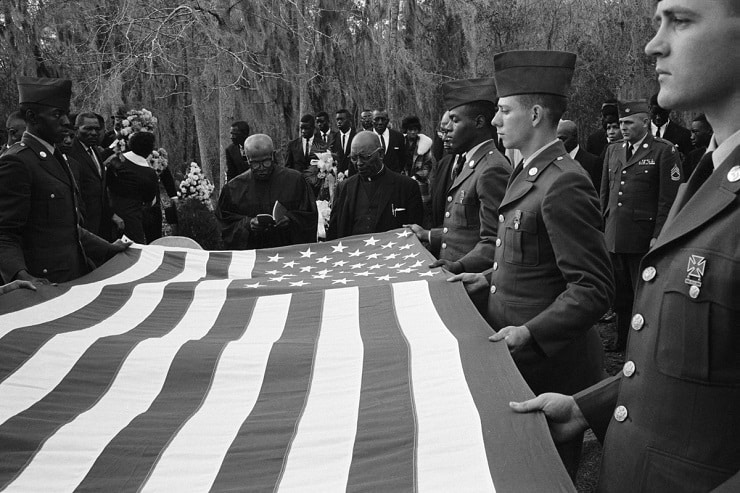 [ Editor’s Note: You will not read anything like this anywhere else besides VT. West Point will never call to set up a debate, or challenge any of it in writing as it knows it would only get the material more visibility, which it never wants.

Hence we get treated by many like we don’t exist. But the problem for them is that as long we do live the more time we have to show we have been right, and that they have failed to hold up their end of the oath, “to defend against all enemies, foreign and domestic.”

There is no monument for the one million unreported ‘killed in after action’ from the Vietnam war on the West Point campus, Pentagon lawn, or a Veterans’ cemetery any where. No one accepts any responsibility, which is why we will always rub that in their faces so that it does not happen again… Jim W. Dean]

American military attacked Syria with missiles, albeit with a humorous lack of success, in response to poison gas attacks that the US and its coalition partners were complicit in staging, this is not conjecture either.

Where the US military won’t commit crimes, and we aren’t sure where that line is drawn, contractors are used, like Blackwater and so many others, to smuggle weapons to terrorists, assassinate local leaders including doctors and teachers and stage atrocities blamed on others.

Does the US military really do this? Yes, of course they do, this is what special operations troops are trained for, this is how “famous” heroes of the oil wars can rack up huge kill counts.

All you must do is shoot everyone you see and call them “terrorist suspects” or “enemy combatants.” We have all seen the video from Wikileaks, a helicopter gunship mowing down civilians trying to rescue other civilians just killed by the same helicopter.

Similarly, the US filled Guantanamo with randomly chosen “terrorists,” simply picked at random, some bought much the way plantation owners used to buy slaves.

Who would do this?

There is no question whatsoever that the US, along with Turkey and Israel, not only supplies terrorists in the Middle East and Africa, they fly combat missions to aid them in every way.

Every atrocity in Yemen has a component of US involvement from planning bombing missions on civilians to supplying prohibited chemical weapons.

Yet no one speaks up, except in private, when one Navy SEAL commander sat down with me at a conference outside Phoenix and described how US military were used to export tons of processed heroin a year from Afghanistan.

Led by the Worst of the Best

Making this possible is an officer corps led by service academy graduates picked for their mediocrity and moral ambiguity. Four years of fake education and indoctrination then unleashed the same on a world, willing to do whatever they are told.

Vietnam should have been a lesson that lived on to reform America’s military. Instead, it was fictionalized and pushed “under the carpet.”

The military the US sent to Vietnam wasn’t up to that, not a military filled with enlisted college graduates who had been drafted, a military made up of a real cross section of America, except for the conspicuous absence of the “fortunate sons,” such as Donald Trump.

Traditionally, based on the 17th century model, military is made of officers from the privileged classes, who buy their commands and run them as a private business and the enlisted, pressed into service, taken from prisons or recruited from the dregs of population.

There are exceptions but this was the rule and, in its own way, the rule again, particularly for the United States.

The reputation of the US military, those aspects of that reputation that are still positive, was earned at Guadalcanal and Omaha Beach or at Belleau Wood in the Great War, famous now for being the battle field cemetery shunned by Donald Trump.

He called American military “losers and suckers.” This is not conjecture. Though this is an insult it is also, to a significant extent, true. I can say this where he cannot in that I served in that military and was made to feel exactly as Trump described, as a loser and sucker.

The people making me feel this were the commissioned and non-commissioned officers I served under. I even became one.

Stepping back, these battles, the ones during the world wars, were different.

These were battles fought by citizen soldiers, officers that were bank clerks and teachers and armed men taken from every position in society with, of course, exceptions, the influential families that have always looked to others to carry their burdens.

The tradition of the citizen soldier is far older, Greece in the classical period or the Roman Republic, fictionally from Heinlein’s Starship Troopers.

By law, universal military service is a tenet of American citizenship, or was until America needed a military that no citizen soldier could comfortably serve in, unless extremely gullible.

Vietnam was the last war fought by citizen soldiers. Despite the dark history of alleged war crimes the US is accused of in Vietnam, in truth, the Pentagon wanted an end to the “citizen soldier” for one reason above others, citizens of a democracy don’t make good terrorists.

The Pentagon saw itself with a need to use new tactics to oppose communism around the world and the lessons the US learned in El Salvador, Guatemala (covert) and Nicaragua/Honduras (covert) made a military like the one that served in Vietnam superfluous.

During the Vietnam War, the Pentagon continually passed down orders to commanders “in the field,” (in Vietnam few ‘commanders’ ever really served in the field) to stage atrocities.

Snipers were rewarded for running up high numbers. I served as a Marine sniper in Vietnam, for awhile at least, until my reluctance to randomly shoot civilians became a hinderance and I was returned to the mundane duties of a “rifleman.”

Soldiers and Marines were continually ordered to burn villages or to kill more people, whenever possible with knives, to simulate hand to hand combat. Officers would then edit themselves into these combat reports, even though they were miles away at the time, awarding themselves medals for heroism.

Eventually, they would begin believing they were actually there.

So many fake medals were given out to officers serving in Vietnam that mimeograph sheets were used which included standard fake heroic events, with dates, places and names changed using correction fluid.

The templates, labeled “bronze star” and “silver star” would hang on nails above a typewriter for continual reuse.

Similarly, graduates of the service academies, Annapolis and West Point, would be kept from combat, the military during Vietnam at least, thinking the war was too hopeless to lose “valuable” personnel.

Those whose service was largely fake did, however, always come back with combat awards. Were one to think about it, the idea of a giant bayonet charge, generals only, seems quite humorous. A review of Pentagon records, however, makes such an absurd picture one we are all asked to accept.

By 1968, the Pentagon had given up. Combat units serving in Vietnam were forgotten, food and supplies became unavailable, starvation and malnutrition, particularly among Marines, was commonplace, conditions faced only on the rarest occasions during World War II.

Unrest among those abandoned was also commonplace, hundreds, not simply dozens, of mutinies took place, likely hundreds, not dozens, of officers and senior NCOs were killed in fragging incidents.

“Lifers” as they were called would wall themselves off from enlisted troops, building private barbed wire compounds within US bases.

They would withdraw there and cower through the night, afraid of both the Viet Cong and the troops they commanded. I am witness to this, and this was not an isolated phenomenon but is no longer reported or even spoken of.

The American military is a complex organization of well over 2 million financed by upwards of one trillion US dollars a year, truth be told.

Were the US a democracy as claimed and were the US to be following its roots and traditions, a professional standing army led by the Perfumed Princes of the Pentagon (coined by Col. David Hackworth) would be impossible.

The 19th century was to be the end of professional military, typically hired criminals settling squabbles for pumped up elites. The Great War, which sucked manpower from every corner of earth, was to signal an end to this kind of war and, with that, an end to wars for “sport.”

The US has chosen a direction of behavior, one steeped in global dominance, that is dependent on a military that is both occupation force and pro-insurgency, with no lines drawn between “freedom fighters” and terrorists.