The West is facing an unprecedented threat to its hegemony, as more agile, innovative, and cohesive non-Western powers are growing by leaps and bounds, to the point of making a transition to a global non-Western hegemony for the first time in history. 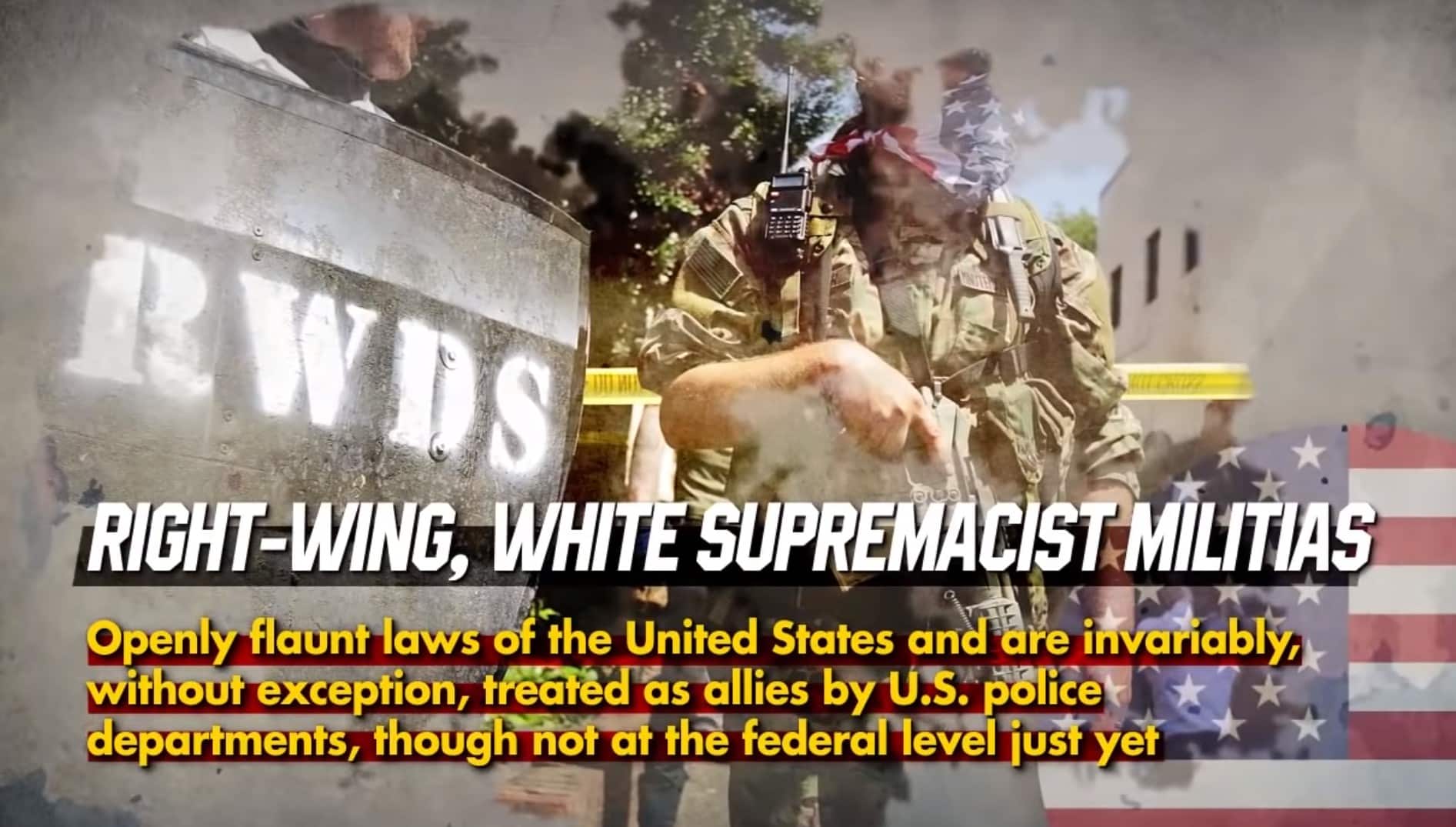 During the last five centuries, the baton had passed from one European power to the next, and ultimately to the United States. Should the United States falter under the double weight of its global imperial overstretch and domestic oligarchy plundering even its own society, there will not be another Western state there to pick up where it left off.

European Union, once touted as a likely successor or possible candidate for US-EU co-hegemony, is showing few signs of consolidating into a federation. Thus America’s decline would in all likelihood lead to the People’s Republic of China becoming the global hegemonic power.

Russia certainly has problems with oligarchy as well, but at least there the oligarchs are essentially treated as a “necessary evil” of capitalist economy and kept in check by the national security wing of the Russian state that is directly answerable to the President.

Likewise China’s billionaires are kept at arms length from political power, lest they use In the West, on the other hand, the oligarchs run the show and the national security state is kept under close ideological surveillance to ensure that it will come to the defense of the oligarchy “against all enemies, foreign and domestic”.

US service academies, which admit on the basis of recommendations by elected US officials, who themselves are creatures of special interests and Big Money, are an example of that ideological oversight. And ultimately the US political system’s apparent inability to reform itself, to make itself more fair and meritocratic, means that it’s bound to lose the great power competition to those who are simply marginally less corrupt.

But that simply won’t do, which means the more effective competitors have to be brought down by other means, up to and including open warfare for which the United States is actually preparing. The current US modernization programs appear to be intended to give the US the ability to wage offensive warfare even against nuclear weapons states by not later than 2030. In the meantime other tactics will be used, such as economic warfare, information warfare, and of course the use of various proxy forces.

Since in an oligarchy property of the elites becomes of paramount importance, right-wing militants have long been used as a means to suppress socialists and communists. Very often these right-wing paramilitaries operate jointly with the official law enforcement and security forces. Examples here include the SA stormtroopers operating as Hilfspolizei in support of German police forces combating left-wing parties in Weimar Germany, the autodefensas in Colombia, even the drug cartels whose own politics tend toward the reactionary end of the spectrum.

We are seeing exactly the same process emerge in the United States, in the form of right-wing, white supremacist militias who are allowed to openly flaunt laws of the United States and are invariably, without exception, treated as allies by US police departments, though not at the federal level just yet.

The situation is only marginally better in the EU, but even there right-wing militants are treated with kid gloves and, like their Islamist brethren, are allowed to travel to Ukraine and obtain combat training and experience in the Azov Regiment. Considering that, in the view of European leaders, “there is no alternative” to economic neoliberalism, there is little doubt Europe’s far right will be weaponized in support of the regime should pro-democracy protests in European countries rise above the level of the Yellow Vest ones we have seen so far.

But that is only the defensive aspect of weaponizing right-wing nationalists. It keeps the ruling classes secure against threats from below, but does not contribute anything to the struggle against China, Russia, other “emerging threats” to Western hegemony.

Thus, whereas extremists are the stormtroopers of counter-revolution waiting in the wings in case there is an actual threat of revolution or even substantial reform in countries of the West, in non-Western countries they are used as the spearhead of regime change. These extremists come in two flavors. The first prong is Islamic extremism, and so far to the extent that Western governments cultivate such individuals (as seems to be the case in Europe), it’s done exclusively for foreign consumption, as it were.

For the most part, Western intelligence services displayed remarkable equanimity as French, Belgian, even German islamists traveled back and forth between their home countries and various MENA war zones. Invariably in cases of “blowback” in the form of terror incidents, the perpetrators were described as “known to the security services”. CIA’s investment in Al Qaeda in the 1980s, in particular, did result in fair amount of “blowback” in the form of 9/11, but even that has not dissuaded Western powers from promoting this type of proxy fighter.

The second prong are the ethnic nationalists of Russia and other CIS states. Before Ukraine, not having a war on which to sharpen their claws, they adopted the guise of “soccer hooligans” and, courtesy of UEFA, quickly developed international links. There is little known on Western services’ efforts to utilize these contacts, but it is evident Western countries actually keep track of their “hooligans” in order to occasionally prevent them from international travel if there is danger of excessive violence.

Kiev’s ‘hooligans” were in force on the Maidan and formed the lion’s share of Parubiy’s “Maidan security force”. There is also a lot of overlap between these “hooligans” and various right-wing organizations like Right Sector, Azov, C14, and others. But in order to be fully effective, these right-wing militants must be mobilized by someone with big money, usually an oligarch disaffected with the system who enjoys the secret blessing of the US and EU.

In Kiev that scenario worked to perfection. Yes, there were right-wing nationalists, and yes, there were disaffected oligarchs willing to bankroll their organizations and mobilize them to achieve their purposes, which was beforehand blessed by Western powers that be. In Hong-Kong this approach faltered, apparently largely because Beijing was able to reach a behind-the-scenes agreement with the island enclave’s oligarchy which then abandoned its militants to their own devices. Consequently that uprising has all but flared out.

In Belarus neither of these conditions were satisfactorily met. The country does not really have oligarchs capable of raising a de-facto army of street-fighters, and the street-fighters themselves are none too numerous. While there is evidence Ukrainian entities participated in grooming Belarusian shock troops, including in the trenches of the Donbass, in the end their numbers and/or enthusiasm was not what the Western curators of Belarus’ coup anticipated. After a few nights of violence, that segment of the protest movement vanished out of sight due to effective Belarusian counter-intelligence efforts.

Atlantic Council practically disclosed a state secret when it bemoaned the absence of “robust young men” capable of going toe-to-toe with the security forces. It is evident Lukashenko’s survival took them by surprise, and it is probable someone over-promised their ability to deliver said “robust young men” onto Minsk streets.

Could this work in Russia? Probably not, due to both Russia’s own preparations and the West characteristically shooting itself in the foot. Preparations include formations like Rosgvardia which are meant to combat the low-to-middle intensity scenarios like the Maidan.

But the Western economic warfare against Russia, the freezing of assets of Russian firms and individuals, have encountered a consolidation of the Russian oligarchs around the country’s political center. The West overplayed its hand there: expecting a quick, Maidan-like resolution in Moscow, it sent a signal it does not respect Russian individuals’ property rights, and which oligarch wants to have their property rights disrespected?

The tragic irony of it all is that while the strategy of destabilization using the disaffected oligarch—young extremist combination has been progressively less effective with coming years, as governments worldwide have drawn appropriate lessons from color revolutions and are determined not to be undone in a similar manner.

Is United States experiencing a genuine, home-grown, grass-roots pro-democracy movement that is not bank-rolled by oligarchs or spearheaded by racial extremists? To be sure, elements in the Democratic Party think it can be used as a “get out the vote” device against Donald Trump, but on the other hand there is mounting evidence it is having an opposite effect.

America’s middle bourgeois, being easily frightened and anxious to protect what little property it still has, just might decide Trump’s the guy to keep them safe going forward. But even, or perhaps especially, if Biden is elected, one should expect more use of various paramilitaries to maintain order. Unfortunately America’s internal instability will mean even more erratic and reckless international behavior.