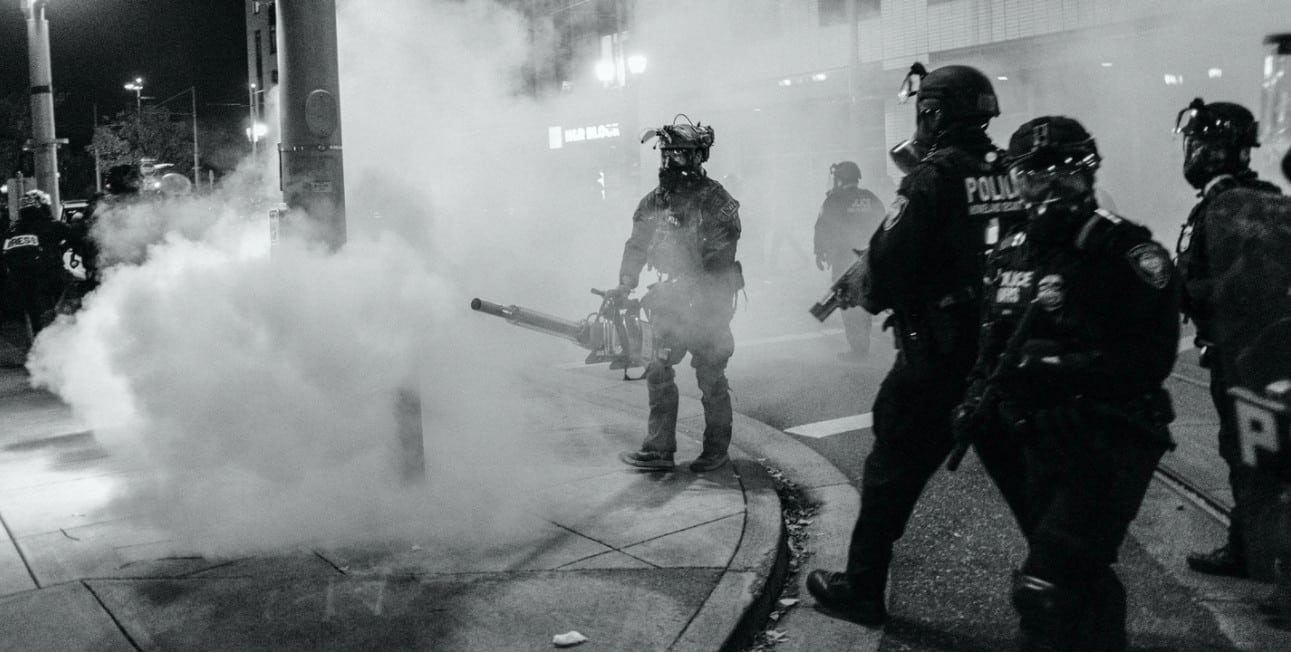 DEPARTMENT OF HOMELAND SECURITY SUED FOR CHEMICAL WEAPONS USE

Federal agents employed “a vast arsenal of weapons,” including toxic smoke grenades, against protestors in Portland.

The Intercept: ENVIRONMENTAL GROUPS SUED the Department of Homeland Security and its acting secretary, Chad Wolf, in federal district court today over their use of what the suit called “a vast arsenal of weapons” on Black Lives Matter protesters in Portland.

The weapons deployed by the federal agents during what the Trump administration dubbed “Operation Diligent Valor” pose potentially grave health and environmental hazards, according to the suit, which the ACLU Foundation of Oregon filed on behalf of the Northwest Center for Alternatives to Pesticides, the Willamette Riverkeeper, Cascadia Wildlands, Neighbors for Clean Air, and 350PDX.

The Department of Homeland Security did not immediately respond to a request for comment.

Among the weapons mentioned in the complaint are rubber bullets; CS tear gas; OC spray, also known as pepper spray; and hexachloroethane smoke grenades. As The Intercept reported earlier this month, the U.S. military began phasing out the smoke grenades years ago because of their toxicity.

Along with a thick smoke, the grenades release chemicals associated with short- and long-term human health effects, including nausea, vomiting, central nervous system depression, kidney and liver damage, and cancer. (Left/Top) Federal agents deploy tear gas in the neighborhood near the Immigration and Customs Enforcement building in SW Portland on Oct. 17, 2020. (Right/Bottom) A federal agent uses a device to emit what is believed to be HC gas in front of the Edith Green – Wendell Wyatt Federal Building in downtown Portland on July 16, 2020.Photo: Doug Brown, ACLU of Oregon

The groups detail the serious risks of CS tear gas, citing a 2014 report that showed it had “a profound effect on the respiratory system” and that U.S. Army recruits exposed to the tear gas in basic training had a nearly 2.5 times greater risk of acute respiratory illness.

The complaint lists symptoms associated with the gas, including eye injuries, chronic pain, cough, neurodegeneration, and menstrual irregularities. And it presents evidence that “[e]ven at low concentrations, CS gas presents a risk of irreversible or other serious, long-lasting adverse human health effects.”