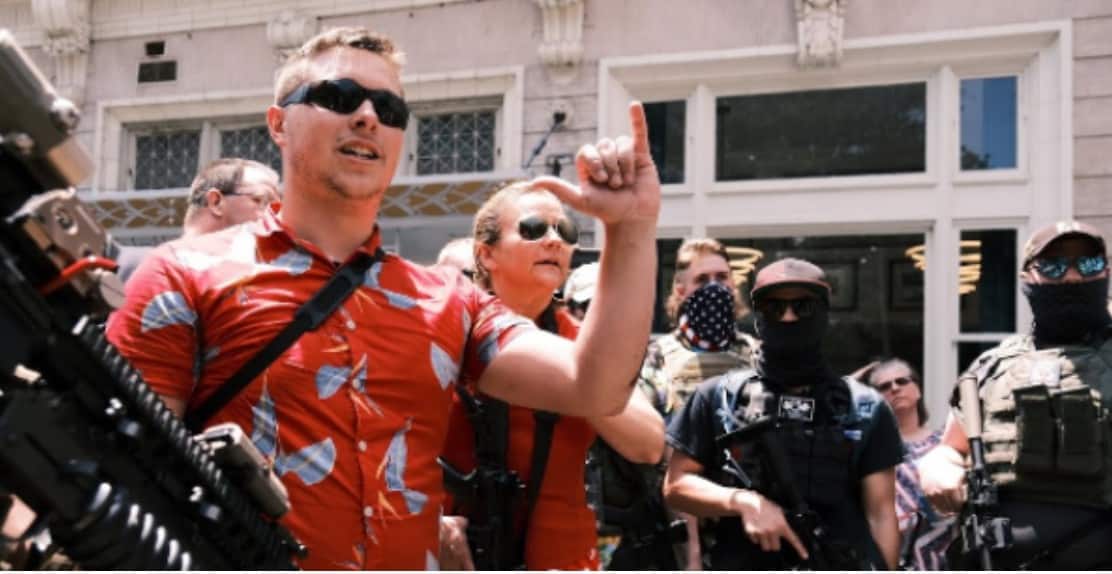 VT: The MNM reports that Boogaloo ‘works with the police.’ This is an understatement, ‘Boogaloo’ is a ‘Blue Gang’ part of one that has existed all along, supremacist, human traffickers, drug dealers and crooked judges and prosecutors. The cartels began funding what is now Boogaloo some years ago.

Listen to an FBI agent (now retired) give you the background on Boogaloo.

Thus far 14 Boogaloo members, not police, are arrested in Michigan for terrorism. Arrests are starting in Ohio and Virginia. The real problem is that Booglaloo has already murdered police in 3 states and now we find that it isn’t just false flag terrorism, its police killing their own, ‘cleaning house.’

Boogaloo cops are now killing off police who don’t take bribes. This is a ‘Serpico’ problem.

What we all thought was possible turns out to be absolutely true.

A conservative white supremacist from Texas drove to protests for George Floyd in Minneapolis, fired 13 shots from an AK-47 into the police station, pretending to be a protestor. https://t.co/4suM7uv9f2

Daily Beast: A member of the far-right “Boogaloo” movement allegedly opened fire on a Minneapolis Police building in May at the height of protests over the killing of George Floyd, according to federal charges announced Friday.

Ivan Hunter, 26, is accused of one count of riot for his alleged participation in the protests, during which prosecutors say he fired 13 rounds from a semi-automatic rifle into the Minneapolis Police Department’s Third Precinct.

A Texas man who says he is affiliated with the far-right Boogaloo Bois group is suspected of opening fire on a Minneapolis police station in May during protests over George Floyd’s death and faces riot charges https://t.co/FLXpuvQEZ3

Hunter is also accused of close contact with a man accused of two murders earlier this year. Both are self-described members of the “Boogaloo” movement, a loosely affiliated far-right and libertarian coalition that preaches insurrectionary violence in the hopes of setting off a civil war.

It was not immediately clear whether Hunter had an attorney.

Boogaloo members have had a visible and sustained presence at racial justice protests this year. Some claimed to support Black Lives Matter, or at least oppose police, a pervasive villain in Boogaloo circles. In private, some Boogaloo groups were more open about hoping to co-opt the protests to boost their own message: a Boogaloo trio arrested in Nevada earlier this year is accused of trying to spark violence at a Black Lives Matter protest in order to incite unrest.

According to a criminal complaint, Hunter and other members of his Boogaloo group traveled to the Minneapolis protests, in part to rally their cause. “Lock and load boys. Boog flags are in the air, and the national network is going off,” one member of the group allegedly posted to social media ahead of the trip. Some of the men allegedly traveled far for the event; Hunter is from Texas.