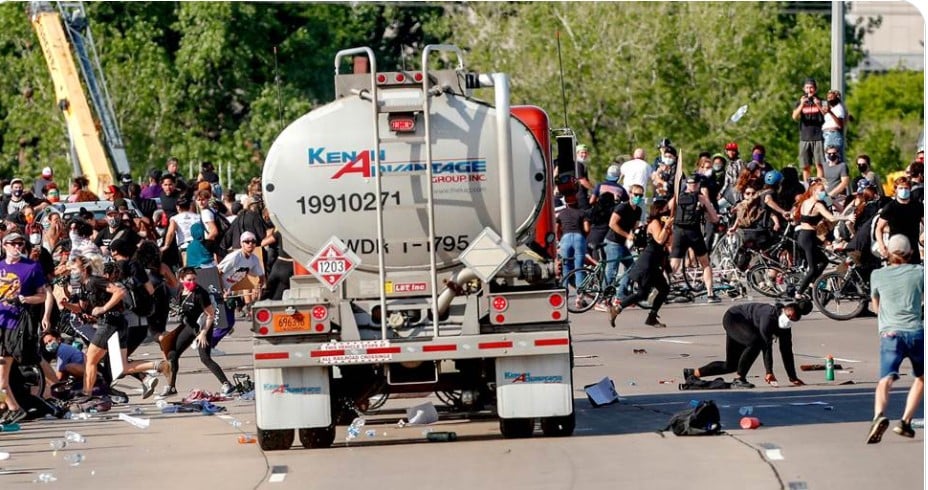 VT: Minneapolis police, tied to Boogaloo killers, pulled down a barricade and sent a gasoline truck driven by a Ukrainian Nazi-Supremacist into a crowd of 2000…then lied to get him off.  It didn’t work.

The film where they got the idea?

The trucker who was attacked after driving into a massive protest on the Interstate 35W bridge after the killing of George Floyd was charged Thursday with two criminal counts from the May 31 incident.

Hennepin County Attorney Mike Freeman’s office charged 35-year-old Bogdan Vechirko of Otsego with threats of violence, a felony, and criminal vehicular operation, a gross misdemeanor, saying the driver admitted to investigators that he was “kind of in a hurry” and the investigation showed he sought to “scare” the protesters out of his path.

NEW: Vechirko has been charged with a felony count of threats of violence and a gross misdemeanor count of criminal vehicular operation. According to the criminal complaint, investigators say his line of sight would have provided enough time to see the crowd and stop his truck https://t.co/DM25M0VJWv

Vechirko drove onto the bridge as hundreds of pedestrians protested the death of Floyd, who had died six days earlier in the custody of Minneapolis police. Vechirko said he was returning from a fuel delivery in south Minneapolis and didn’t intend to drive into the protest or aim to hurt anyone.

The trucker who was attacked after driving into a massive protest on Interstate in Minneapolis was charged today in the May 31 incident.

Bogdan Vechirko, 35, was charged with a felony count of threats of violence and a gross misdemeanor count of criminal vehicular operation. pic.twitter.com/CNe98n6fe2

The criminal complaint said investigators reviewed cellphone videos showing that Vechirko should have known something was occurring on the bridge because “in addition to the large crowd, there were multiple vehicles stopped on I-35W northbound as the road approached the bridge and that a number of vehicles were driving the wrong direction up an entrance ramp.”

In a re-enactment with a similar semi-truck, investigators found Vechirko’s “line of sight would have given him sufficient time to stop his truck after viewing the crowd.” But he didn’t stop until someone stumbled in his path, the complaint said.

Minnesota Department of Transportation video later showed that Vechirko entered Interstate 94 from the Hennepin/Lyndale ramp, which was not barricaded. Vechirko continued eastbound to merge onto the northbound lanes of the I-35W bridge where the protesters were gathered.

The charges five months after the incident came as somewhat of a surprise because of the confusion surrounding the incident. Some protesters claimed Vechirko veered left into the crowd rather than away from it, and state officials gave conflicting public statements.

State Public Safety Commissioner John Harrington at first seemed to exonerate Vechirko, saying he “panicked” and wasn’t aiming for the protesters. The next day, Harrington said, “we are certainly getting to the right charge that holds him accountable.”

State officials also tried to figure out why barricades weren’t in place to prevent the truck and several other vehicles from coming upon the crowd making its way from U.S. Bank Stadium onto the bridge over the Mississippi River.

Harrington said the Minnesota Department of Transportation (MnDOT) had been directed to seal off interstate ramps by 5 p.m. to protect the marchers.

[Update today: When we rushed this story out I mixed up the Washington, DC protests with Minneapolis...JD ]

[ Note: The plot thickens on this story at light speed. MSM “digging” into where the truck came from with its statement repeated over and over via Tweets that the truck was already on the overpass when the ramps and exits were closed.

So wondering minds here at VT would ask, how in the hell did a fully loaded fuel truck get through all the police check points to get on the highway?

Are we to believe that he got lost and was “trying to find by way back home” so he was allowed onto a ramp to a hwy loaded with protesters, and we found out on Google, at between 60 and 90 seconds that he was a Trump supporter and donator.

And the police are supposed to have crews of people in a fast moving situation like this running fast Google profiles on any suspicious people coming in from checkpoint reports.

That should have happened with this guy being parked, taken out of the cab, and at least having a few cops take a quick look around the gas tanker bomb, ah…excuse me, ‘truck’.

Remember, this is DC under a a full alert, with drones in the air, and you can assume the Pentagon people were fully deployed with their assets… Jim W. Dean ]

[ Update: This just out from fuel truck company…]

North Canton, Ohio, May 31, 2020 – Our hearts go out to all those who are grieving the events of this past week. We have been informed of an incident involving one of our independent contractors in Minneapolis, MN during recent protests. Our first and foremost concern is for the safety and security of the public, our employees and our customers.

We will be cooperating fully with the investigating authorities in the days ahead. It would be inappropriate to comment at this time until we have additional facts as the investigation is in its early stages. We will comment further once we have more information.

The media is saying he is Russian but our records show he went to high school in Minneapolis and is part of the anti-Russian Ukrainian community there, from which he was recruited to return to Ukraine by the CIA.

There he trained troops fighting Russian backed separatists but is now being presented to the public as a Russian.

BREAKING: Hennepin County authorities have released the mugshot of Bogdan Vechirko, the driver who drove into a crowd of protesters on the I-35W bridge Sunday afternoon. | https://t.co/DagxLlPuA7 pic.twitter.com/MnBGfRPGb8

Minnesota trucker who drove into peaceful protestors shares the name with a Trump supporter.
Odds of two Bogdan Vechirko in Minnesota is anybody’s guess. pic.twitter.com/fw2T1oKlnw

The government definitely sent this man out to hurt people. The bridge was closed, the truck was full of gas. Where is the start of the video when the truck comes up the bridge I wanna see how he got past, or was he let in?#protests2020 #35w #minneapolis

I have a friend who lives in Minneapolis and was protesting today when someone with a semi-truck carrying a gas tank attempted to drive into the crowd of protesters at full speed…and then tried to light the truck on fire…and before you ask, yes the driver was.

Pickup truck charges into crowd of protesters in Tulsa. Since NYPD drove SUVs into protesters in Brooklyn, similar events happened around the country, including gas truck in Minneapolis. What’s causing trend, what should consequences be for drivers? pic.twitter.com/DtJgB8F415

He also called out protester who posted video from bridge incident.

Now the racist Guard occupies Minneapolis and an hour after the I-35W bridge and road was closed a gas truck "somehow" got onto the closed freeway to run over protesters.#mnleg Police Provocateurs did it https://t.co/ltc8QdFKw7