For as long as it has existed, monotheism has been at war with demons. And I mean literal demons, not just figurative ones.

So what are “demons”? VT Senior Editor Gordon Duff has described seeing a highly-classified C*A memo describing “extradimensional entities that feed on human suffering, and interface with selected humans to maximize the suffering they feed on.” (As if there weren’t enough human suffering already!)

The Satanic/Druidic/Babylonian/Khazar/Freemasonic cults that ally with demons conduct human sacrifices according to the pagan calendar. Halloween, today’s version of the pagan holiday falling directly between the autumn equinox and the winter solstice, seems to be a particularly favored moment for blood sacrifices, perhaps as celebrations of the darkness that is spreading over the earth at this time of year.[1]

So that’s basically what Halloween is: a pagan/satanic human sacrifice holiday.[2] If you think that makes it a good night to send your kids door to door in demonic masks and costumes, begging candy from the neighbors while reveling in horror imagery, God save you from your own foolishness. 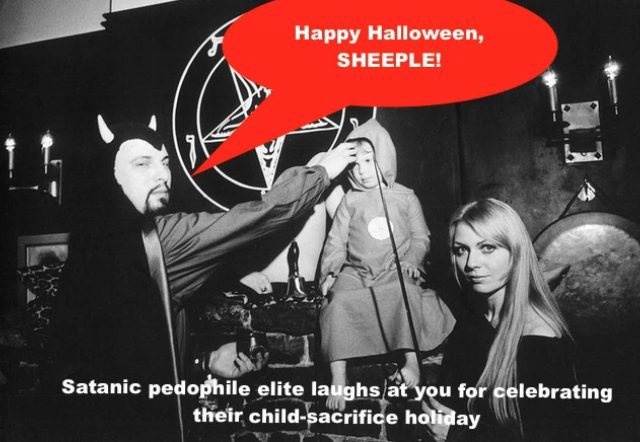 Cults (and occasional individual practitioners of “dark shamanism”) still practice human sacrifice, as they have been doing for aeons. They are on the wrong side of a cosmic war. The other side, the forces of good, may not be as well organized, but they are there nonetheless. The main attempts to get them organized on a large scale have been the monotheistic revealed religions…which, admittedly, have had mixed success. But at least they have clarified what is at stake.

The greatest modern scholar and thinker on the sacrificial, René Girard, agreed that monotheism is based on opposition to human sacrifice. But he pussyfooted around the problematic issue of the ontological reality of the demonic. Perhaps he did so to preserve his reputation in academic circles, where telling people you believe in literal angels and demons, like telling them you know 9/11 was a demonic human sacrifice and an inside job, isn’t the best career strategy.

Girard, a Christian, blamed human sacrifice on fallen human nature. As Stanford University News wrote in his obituary: “Girard was interested in the causes of conflict and violence and the role of imitation in human behavior. Our desires, he wrote, are not our own; we want what others want. These duplicated desires lead to rivalry and violence. He argued that human conflict was not caused by our differences, but rather by our sameness. Individuals and societies offload blame and culpability onto an outsider, a scapegoat, whose elimination reconciles antagonists and restores unity.”

So for Girard, at least publicly, sacrifice was just “the elimination of a scapegoat.” He was only partly right. While the aspect of human nature he described is all-too-real, ritual sacrifices aren’t always just lynchings of a patsy. The high priests of sacrifice cults summon demons and conduct black magic, perhaps including demon-aided reincarnation campaigns, as part of their almost unimaginably nefarious activities.[3]

Girard correctly understands that the ancient Hebrews deliberately separated themselves from a milieu where human sacrifices to pagan “gods” (i.e. demons) were commonplace. The struggle between the monotheists and demon-worshipping pagans also took place within the Hebrew community itself, where “Yahweh” eventually took on a double meaning: 1) The one and only God, the only valid object of worship, who seeks to end human sacrifice and eliminate the demonic, versus 2) The Hebrew tribal “god” (i.e. demon) who, like other demon gods, demands human sacrifice.

The key scene in the development of Abrahamic monotheism is God’s command to Abraham to refrain from sacrificing his son. That “stopped sacrifice” represents the definitive transition from human-sacrificial worship of demonic pagan gods to genuine worship of God.

The career of Jesus, peace upon him, marked the next giant step in the cosmic campaign to put the demons out of business. Jesus was a spiritual healer of unique talents. With the help of God he was able to cast out demons in various ways, including expelling them from humans into swine who then rushed like lemmings off a cliff. (Though the story may or may not be apocryphal, it was preserved as an allegorical image of how demons may be sent back to the nothingness that is their real ontological essence.) In any case, Jesus was the commander of a spiritual war, on behalf of the one true God, against the demons responsible for the grossly unnecessary levels of strife and suffering we experience on Earth.

The next and final prophetic commander of the anti-demon campaign was the Prophet Muhammad, peace and blessings upon him. Struggle against the pagan “gods” (demons) and their followers was at the core of his mission. The Qur’an tells us that most of the pagans worship the evil jinn or shayateen, a concept that corresponds nicely with the English word demons. These demons, the Qur’an says, order their followers to murder their children—an abomination all too common among satanic pagans. (Islam’s rescue of the baby girls the pagans used to bury alive, like the recent rescue of 45 children from sex traffickers, was a major blow against demon infestation and its human hosts.)

The destruction of the bloodthirsty pagan idols around the Kaaba in Mecca, and its re-consecration to God, was a tremendous spiritual-political victory that represented the culmination of the career of the final prophet—whose follower the Mahdi will assist Jesus when he returns to finish his work on Earth. May that happen soon! Christian and Muslim eschatologists agree that Jesus will return and clean house at a time when the demonic has gotten out of hand…and never has it been as out of hand as it is today, when a bankster New World Order of pedophile Satanists is poised to institute global tyranny, most likely in a “rebuilt” blood sacrifice temple in demon/Zionist-occupied Jerusalem al-Quds.

The satanic bankster propagandists have managed to brainwash most people alive today to embrace lifestyles conducive to spreading demonic infestation. Every time you expressly or tacitly give your approval to the demonic, you strengthen it, if only a little. Every time you go along with a Big Lie (JFK, 9/11, COVID, even “Jeffrey Epstein killed himself”), every time you vote for a depraved and degenerate politician, every time you subconsciously celebrate demonic human sacrifice by sending your kids out trick-or-treating, you are telling the demons, their human representatives, and their high commander Shaytan, that you are OK with what they are doing.

The first step to cleansing your heart and soul is simple: withdraw your consent. Make your entire life a message that you are not OK with what they are doing.

[1]Homer Van Meter’s incredible true story of sending several satanic cultists to hell while busting up a satanic Halloween sacrifice and saving the victim deserves a much wider audience. If it doesn’t awaken you to the “Halloween problem” I am describing, nothing will.

[2]It isn’t the only American human sacrifice holiday. Check out my article on Memorial Day.

[3]Read Homer Van Meter’s 4900 Nights for a firsthand account of Druidic sacrifice/reincarnation practices, and the author’s multi-lifetime struggle against them.