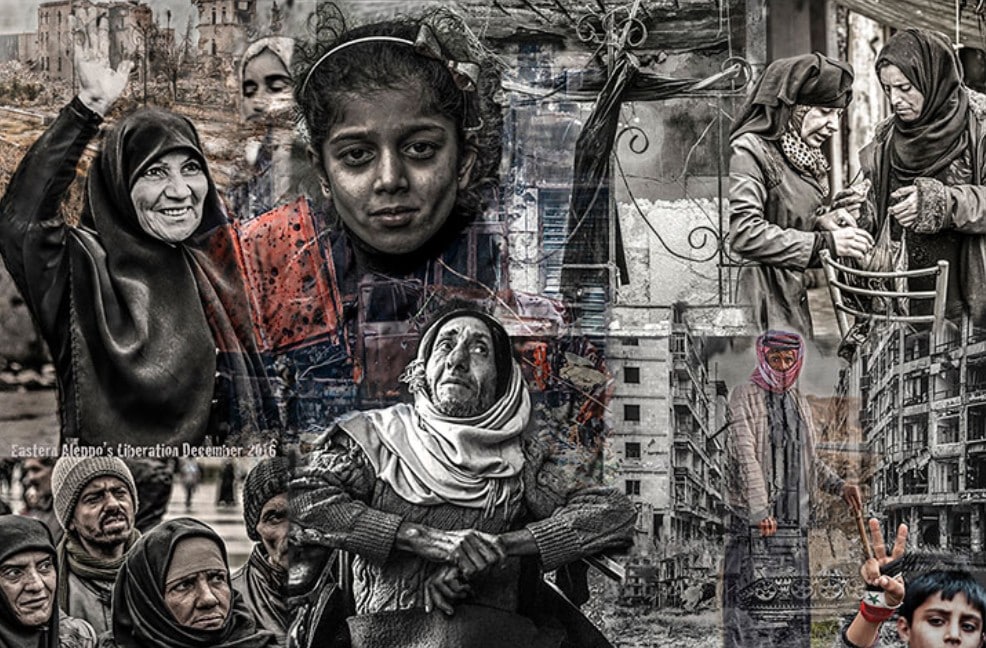 The Western regime change attempt that broke out in violence spring 2011-2012 and allied with lots of terrorist groups has failed. The underlying conflict with the West was, of course much older. And totally ignored by the media.

The turning point of the violence was the fall of Eastern Aleppo in December 2016 which has been documented by TFF in texts and photos – seen by 175 000 but never found worthy of printing in a single Western mainstream media.

The conflict has not been solved. It will blow up in violence in the future too. NATO countries continue to meddle, the US has kept its bases and Mr. Trump “secured Syria’s oil.”

Like with the move of a conductor’s hand, the government-orchestrated worldwide media campaign that had started with the events in Daraa fell silent from December 2016.

No more Hollywood-inspired White Helmets movies. No more children sending appeals for bombings to the world from inside the ruins without wifi.

Of course, there are a number of non-convicted Western NATO country war criminals and Western/Saudi-financed terrorists still at large.

But why get lost in such details? They all only wanted, noble as they are, to rid the world of the latest copy of Hitler, Bashar Al-Assad. They were the Friends of Syria.

Perhaps Syria qualifies as the most systematic and significant example of deceptive media war campaigns in modern times? Admittedly, perhaps only with a hair’s breadth.

People who after the Syria cover-up coverage continue to trust international Western mainstream outlets deserve to be fooled. And they will be – these media are the single largest obstacle to understand our world and the wars that rage.

And, be sure, not one media will apologize to you for its fake and omission reporting about Syria.

This article documents most of it in one place – its main content plus in the links in the articles in my comments under it:

TFF is free and does independent research and public education. Since 1986. You should support it for its continued practicing of the essential Western liberal values – diversity, freedom of research and expression, right to dissent, and truth through dialogue.

It’s been standing up for those values when so many others decayed to bring you only the state-financed and corporate-marketed His Master’s Voice.

Update (September 29, 2020): A few days after this article was published, the authenticity of these leaked materials was indirectly confirmed by the British government, which reported that hundreds of Foreign Office documents detailing its Syria propaganda operations were hacked in an alleged cyber attack.

Leaked documents show how UK government contractors developed an advanced infrastructure of propaganda to stimulate support in the West for Syria’s political and armed opposition.

Virtually every aspect of the Syrian opposition was cultivated and marketed by Western government-backed public relations firms, from their political narratives to their branding, from what they said to where they said it.

The leaked files reveal how Western intelligence cutouts played the media like a fiddle, carefully crafting English- and Arabic-language media coverage of the war on Syria to churn out a constant stream of pro-opposition coverage.

More than half of the stringers used by Al Jazeera in Syria were trained in a joint US-UK government program called Basma, which produced hundreds of Syrian opposition media activists.

Western government PR firms not only influenced the way the media covered Syria, but as the leaked documents reveal, they produced their own propagandistic pseudo-news for broadcast on major TV networks in the Middle East, including BBC Arabic, Al Jazeera, Al Arabiya, and Orient TV.

These UK-funded firms functioned as full-time PR flacks for the extremist-dominated Syrian armed opposition. One contractor, called InCoStrat, said it was in constant contact with a network of more than 1,600 international journalists and “influencers,” and used them to push pro-opposition talking points.

Virtually every major Western corporate media outlet was influenced by the UK government-funded disinformation campaign exposed in the trove of leaked documents, from the New York Times to the Washington Post, CNN to The Guardian, the BBC to Buzzfeed.

The files confirm reporting by journalists including The Grayzone’s Max Blumenthal on the role of ARK, the US-UK government contractor, in popularizing the White Helmets in Western media. ARK ran the social media accounts of the White Helmets, and helped turn the Western-funded group into a key propaganda weapon of the Syrian opposition.

The leaked documents consist mainly of material produced under the auspices of the UK Foreign and Commonwealth Office. All of the firms named in the files were contracted by the British government, but many also were running “multi-donor projects” that received funding from the governments of the United States and other Western European countries.

In addition to demonstrating the role these Western intelligence cutouts played in shaping media coverage, the documents shine light on the British government program to train and arm rebel groups in Syria.

Other materials show how London and Western governments worked together to build a new police force in opposition-controlled areas.

Many of these Western-backed opposition groups in Syria were extremist Salafi-jihadists. Some of the UK government contractors whose activities are exposed in these leaked documents were in effect supporting Syrian al-Qaeda affiliate Jabhat al-Nusra and its fanatical offshoots.

The documents were obtained by a group calling itself Anonymous, and were published under a series of files entitled, “Op. HMG [Her Majesty’s Government] Trojan Horse: From Integrity Initiative To Covert Ops Around The Globe. Part 1: Taming Syria.” The unidentified leakers said they aim to “expose criminal activity of the UK’s FCO and secret services,” stating, “We declare war on the British neocolonialism!”

The Grayzone was not able to independently verify the authenticity of the documents. However, the contents tracked closely with reporting on Western destabilization and propaganda operations in Syria by this outlet and many others. (Update: After this article was published, the UK government told Middle East Eye that Foreign Office documents concerning the work of its contractors in Syria had been hacked and published online.)

Aleaked UK Foreign and Commonwealth Office report from 2014 reveals a joint operation with the Ministry of Defence and the Department for International Development to support “strategic communications, research, monitoring and evaluation and operational support to Syrian opposition entities.”

The UK FOC stated clearly that this campaign consisted of “creating network linkages between political movements and media outlets,” by the “building of local independent media platforms.”

The British government planned “Mentoring, training and coaching for enhanced delivery of media services, including digital and social media.”

Its goal was “to provide PR and media handling trainers, as well as technical staff, such as cameramen, webmasters and interpreters,” along with the “production of speeches, press releases and other media communications.”

An additional 2017 government document explains clearly how Britain funded the “selection, training, support and communications mentoring of Syrian activists who share the UK’s vision for a future Syria… and who will abide by a set of values that are consistent with UK policy.”

This initiative entailed British government funding “to support Syrian grassroots media activism within both the civilian and armed opposition spheres,” and was targeted at Syrians living in both “extremist and moderate” opposition-held territory.

In other words, the UK Foreign Office and military crafted plans to wage a comprehensive media war on Syria. To establish an infrastructure capable of managing the propaganda blitz, Britain paid a series of government contractors, including ARK, The Global Strategy Network (TGSN), Innovative Communication & Strategies (InCoStrat), and Albany.

The work of these firms overlapped, and some collaborated in their projects to cultivate the Syrian opposition.

Western government contractor ARK plays the media like the fiddle

One of the main British government contractors behind the Syria regime-change scheme was called ARK (Analysis Research Knowledge).

ARK FZC is based in Dubai, in the United Arab Emirates. It brands itself as a humanitarian NGO, claiming it “was created in order to assist the most vulnerable,” by establishing a “social enterprise,  empowering local communities through the provision of agile and sustainable interventions to create greater stability, opportunity and hope for the future.”

In reality ARK is an intelligence cutout that functions as an arm of Western interventionism.

In a leaked document it filed with the British government, ARK said its “focus since 2012 has been delivering highly effective, politically-and conflict-sensitive Syria programming for the governments of the United Kingdom, United States, Denmark, Canada, Japan and the European Union.”

ARK boasted of overseeing $66 million worth of contracts to support pro-opposition efforts in Syria.

On its website, ARK lists all of these governments as clients, as well as the United Nations.