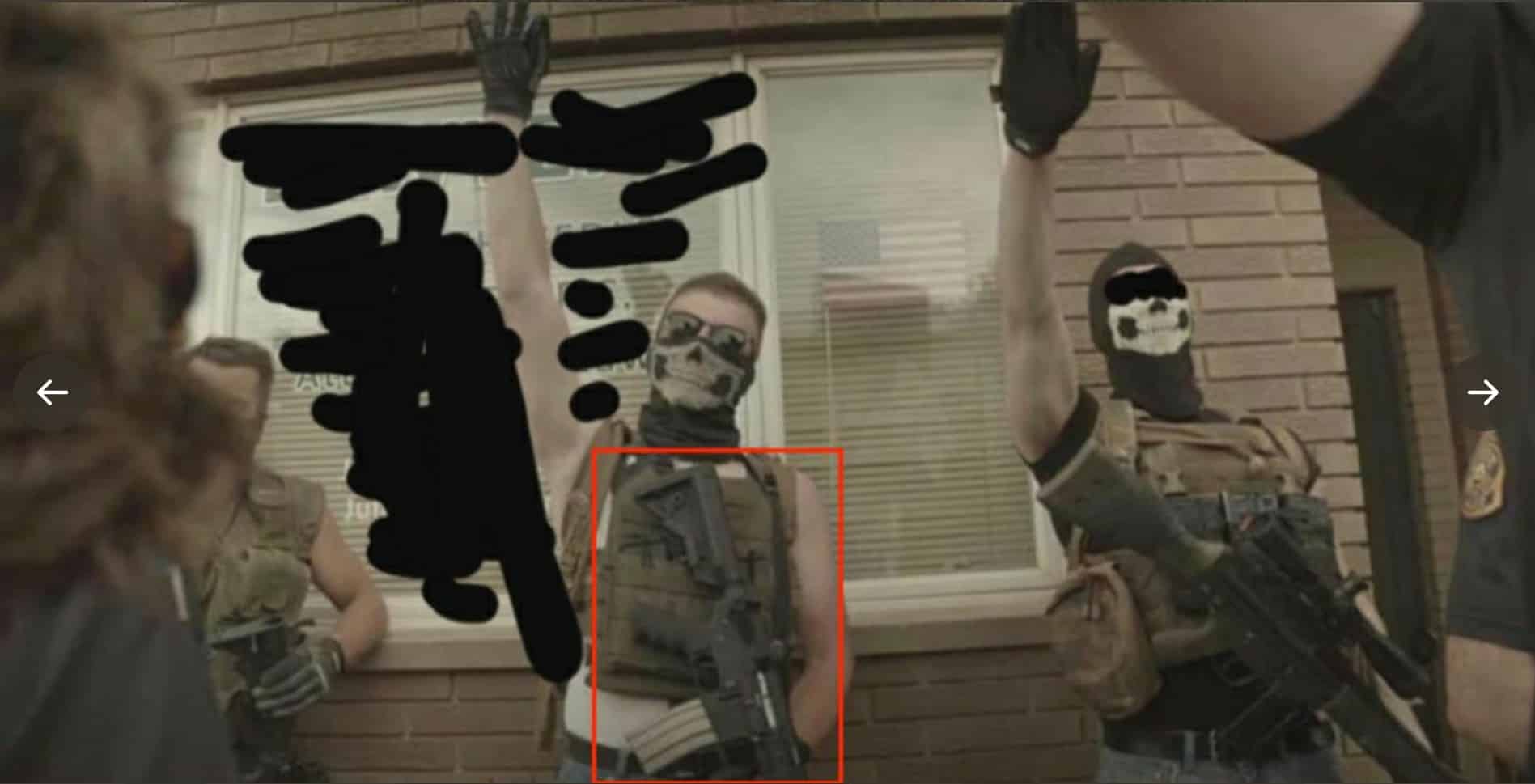 VT: The pro-Trump group, ‘The Base,’ taking their name from a translation of ‘al Qaeda’ got into trouble when Justen, one of those picked up today, accidentally showed up on a wrong porch in Dexter, Michigan (nice town between Ann Arbor and Jeff Daniel’s home, Chelsea), in order to threaten a progressive podcaster they didn’t like.

VT sources say “The Base” receives support from the Department of Homeland Security and uses them to target journalists who don’t buckle under to Trump and Barr.

Now, the FBI has stormed their training camp featured on 60 minutes and has locked up two of their leaders, unless Trump pardons them.  Both face 20 plus years.

Members of “The Base” exalt above all else, Melania Trump and the SS. 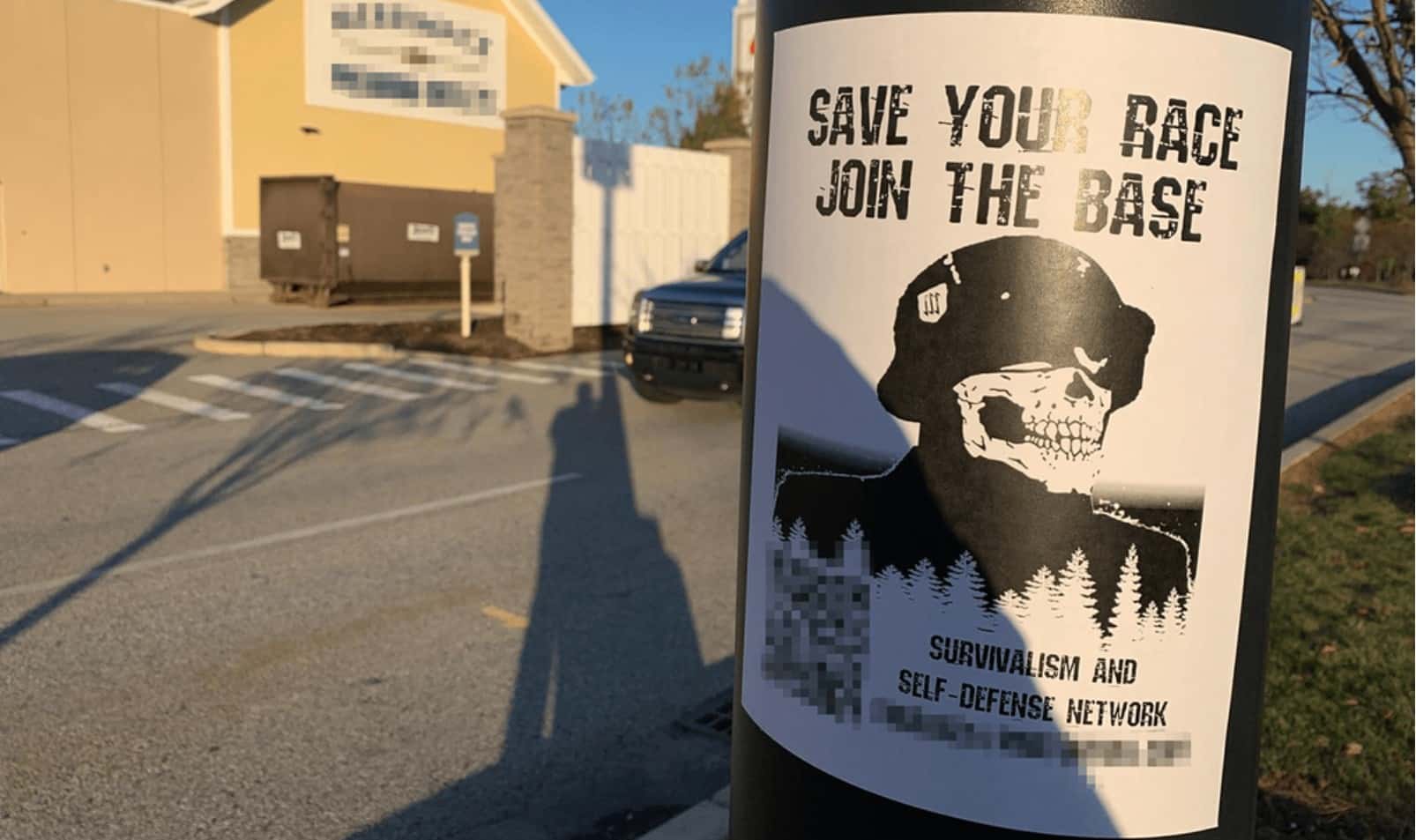 Free Press: According to Nessel’s office, The Base is a white supremacy organization that openly advocates for violence and criminal acts against the U.S., and purports to be training for a race war to establish white ‘ethnonationalist’ rule in areas of the U.S., including Michigan’s Upper Peninsula. The group also traffics in Nazi ideology and extreme anti-Semitism, at one point requiring its members to read neo-Nazi books that urge the collapse of Western civilization. 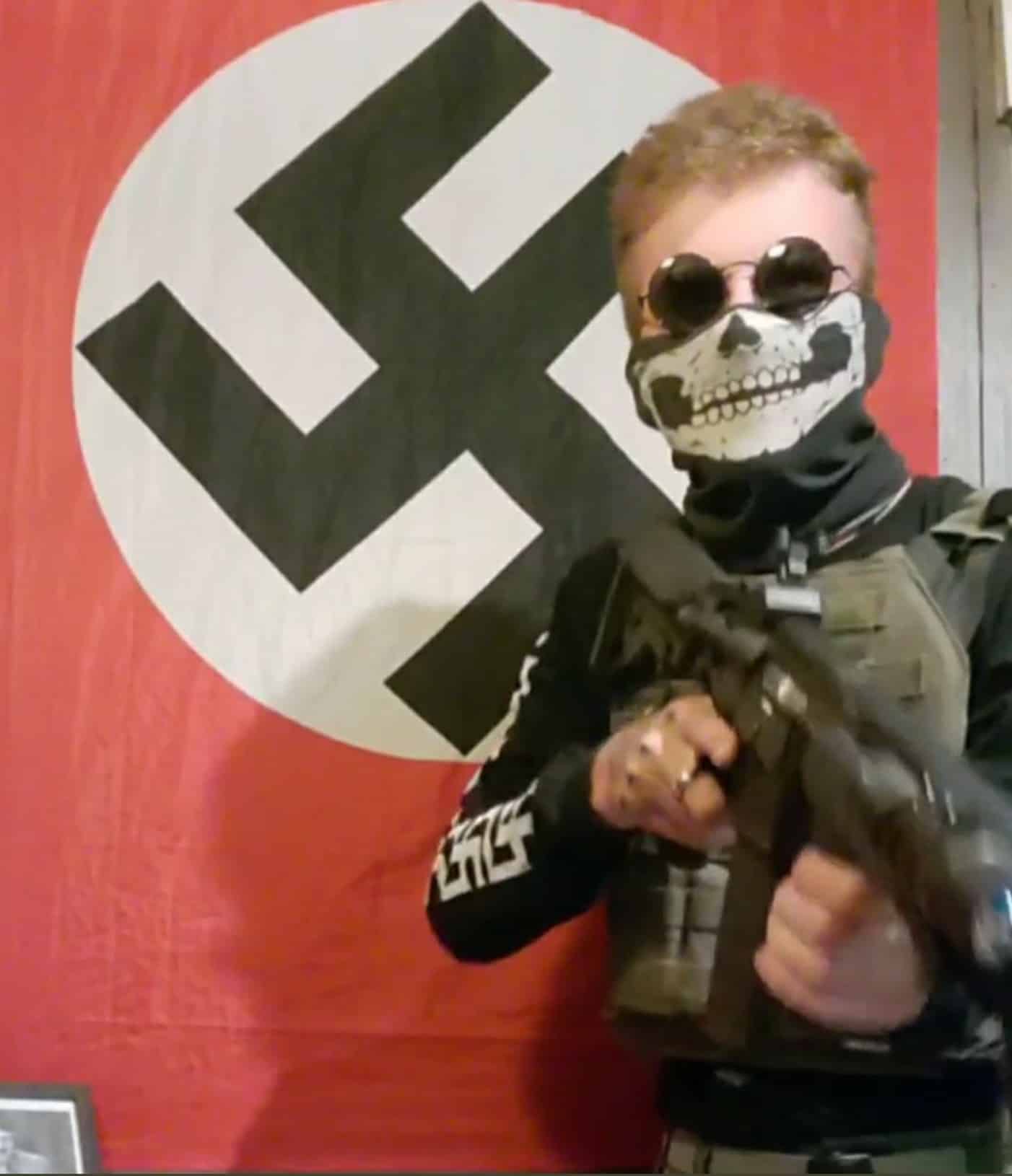 The Base leaders have used online chatrooms to encourage members to meet in-person and engage in military training to prepare for the insurgency against the U.S. government, Nessel’s office said. 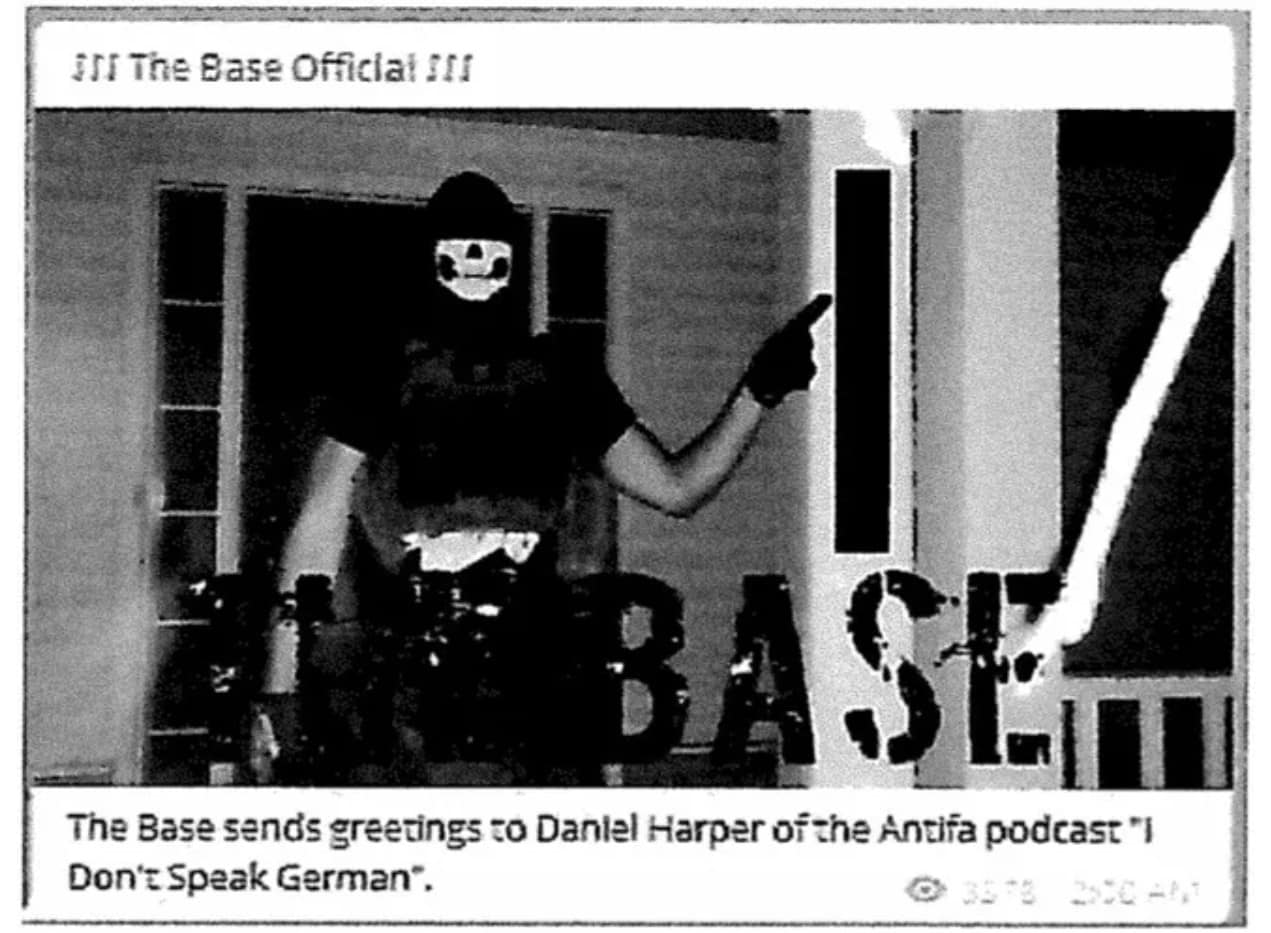 Watkins claims to have been appointed leader of The Base, and reportedly ran a “hate camp” for members of the group, where he led tactical and firearms training for participants with the goal of being prepared for the violent overthrow of the government. The photo of the Dexter home was used by The Base to encourage harassment by its members on the family. Read more… 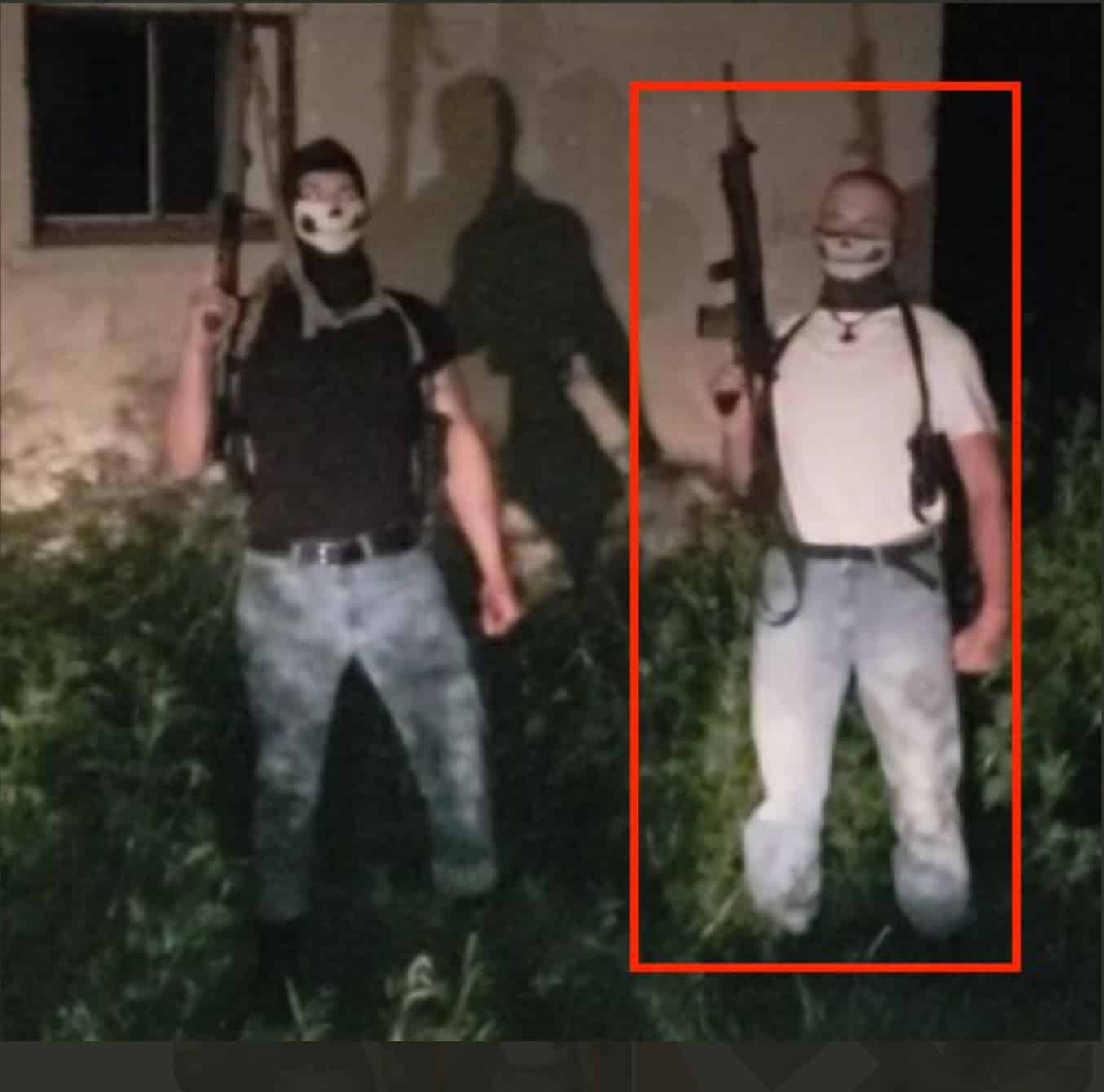 Detroit News: Federal agents on Thursday arrested two men, including the self-proclaimed leader of the Base, a violent, white supremacist group, as part of a continuing crackdown on extremism in Michigan three weeks after the FBI said it thwarted a plot to kidnap Gov. Gretchen Whitmer.

Detroit News: Federal agents on Thursday arrested two men, including the self-proclaimed leader of the Base, a violent, white supremacist group, as part of a continuing crackdown on extremism in Michigan… https://t.co/A5mCKZqH5l

A team of FBI agents arrested Justen Watkins, 25, of Bad Axe, the self-proclaimed leader of the Base, and Alfred Gorman, 35, of Taylor, during a pair of raids across Michigan, a source told The Detroit News. 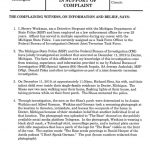 They are linked to a December 2019 incident in Dexter in which a local family was terrorized by the men, who tried to intimidate a husband and wife and shared their address with members of the Base, Michigan Attorney General Dana Nessel said in a statement.

Her office charged the men with several felonies, including gang membership, a 20-year felony, using a computer to commit a crime and unlawful posting of a message. The charges were filed in Washtenaw County District Court, the location of the alleged Dexter incident.

Both suspects were lodge in the Washtenaw County Jail pending arraignment.

“Using tactics of intimidation to incite fear and violence constitutes criminal behavior,” Nessel said. “We cannot allow dangerous activities to reach their goal of inflicting violence and harm on the public. I am proud to work alongside law enforcement agencies at the local, state and federal levels to safeguard the public’s safety from these serious threats.”

State and federal investigators have launched a series of operations this year against members of the Base, a small Neo-Nazi network that started to emerge in mid-2018, said Jon Lewis, a research fellow at the Program on Extremism at George Washington University.

Three men linked to the Base were charged with conspiring to kill members of a militant anti-fascist group, police in Georgia announced in mid-January, a day after three other members were arrested on federal charges in Maryland and Delaware.