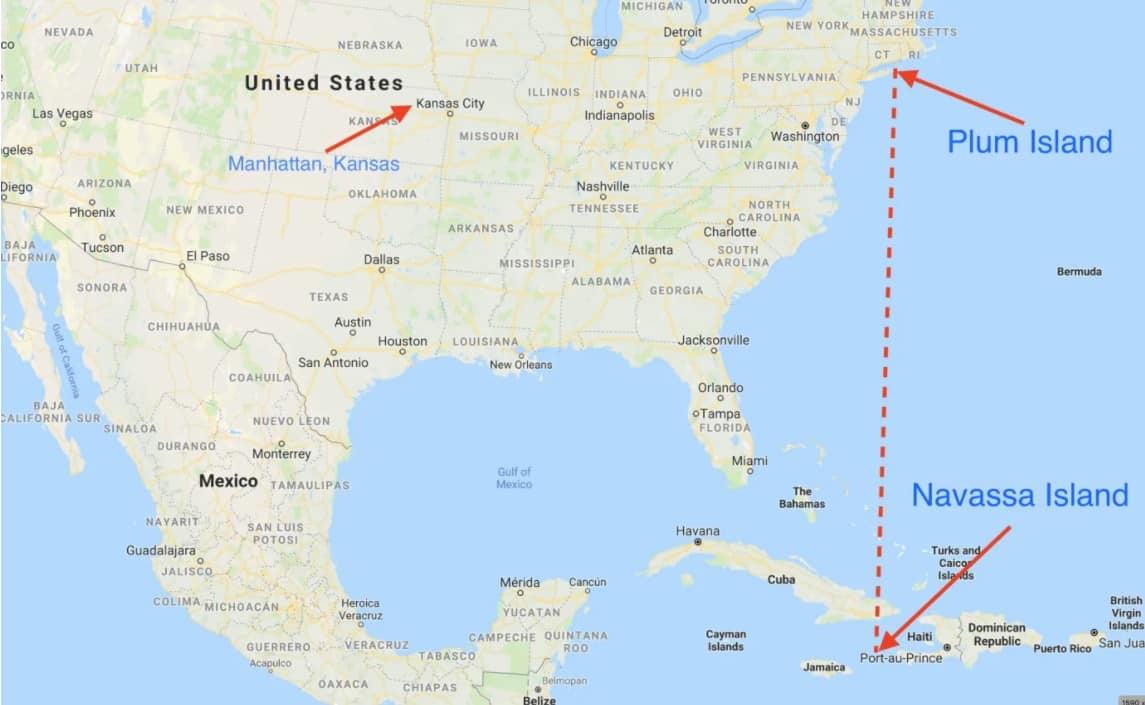 Plum Island, location of the U.S. Army Chemical Corps base at Fort Terry from 1952 to 1956, was established to pursue a program of research and development of certain anti-animal (BW) agents. (a.k.a. biological weapons) The U.S. Department of Homeland Security (DHS) continues to operate the Plum Island center while they build a new home for the laboratory at Manhattan, Kansas, scheduled to open in 2021 as the National Bio and Agro-Defense Facility (NBAF).

Navassa Island is the location where the Navy was investigating the possible presence of biological toxins around the time that agents were reported to have brought dangerous microbes to the island in preparation for a biological attack on Cuba. [Source: CovertAction Magazine]

[Ken Lawrence is an investigative journalist and veteran writer for CovertAction Magazine. Since the magazine’s founding in the late 1970’s, Lawrence regularly penned the popular column “Sources and Methods.” See the archives. In this piece, he presents new evidence of the 1971 CIA attack on Cuba with the African Swine Fever virus (ASFV).—Editors.]

With at least the tacit backing of U.S. Central Intelligence Agency officials, operatives linked to anti-Castro terrorists introduced African swine fever virus into Cuba in 1971. Six weeks later an outbreak of the disease forced the slaughter of 500,000 pigs to prevent a nationwide animal epidemic.A U.S. intelligence source told Newsday he was given the virus in a sealed, unmarked container at a U.S. Army base and CIA training ground in the Panama Canal Zone, with instructions to turn it over to the anti-Castro group.

The 1971 outbreak, the first and only time the disease has hit the Western Hemisphere, was labeled the “most alarming event” of 1971 by the United Nations Food and Agricultural Organization. African swine fever is a highly contagious and usually lethal viral disease that infects only pigs and, unlike swine flu, cannot be transmitted to humans. There were no human deaths in the outbreak, but all production of pork, a Cuban staple, came to a halt, apparently for several months. . .

The U.S. intelligence source said that early in 1971 he was given the virus in a sealed, unmarked container at Ft. Gulick, an Army base in the Panama Canal Zone. The CIA also operated a paramilitary training center for career personnel and mercenaries at Ft. Gulick. . .

Another man involved in the operation, a Cuban exile who asked not to be identified, said he was on the trawler where the virus was put aboard at a rendezvous point off Bocas del Toro, Panama. He said the trawler carried the virus to Navassa Island, a tiny, deserted, U.S.-owned island between Jamaica and Haiti. From there, after the trawler made a brief stopover, the container was taken to Cuba and given to other operatives on the southern coast near the U.S. Navy base at Guantanamo Bay in late March, according to the source on the trawler.

It was an explosive story, reprinted in newspapers across the country. The CIA officially denied it six days later, in response to a request from the U.S. Senate Select Committee on Intelligence, but the Newsday reporters had cited so many corroborating sources, with such specific details, that the denial was not widely believed.

The most compelling reason for trusting the credibility of the Newsday report was that the only place in the Western Hemisphere where the virus was known to have been kept before the outbreak in Cuba was at the secret Plum Island Animal Disease Center (PIADC) laboratory off the eastern tip of Long Island, where local Newsday reporters had been cultivating sources since the one and only time reporters had been allowed inside in October 1971.

Plum Island had hosted the U.S. Army Chemical Corps base at Fort Terry from 1952 to 1956. According to Deadly Cultures: Biological Weapons since 1945 by Mark Wheelis and Lajos Rózsa, the mission at Fort Terry was “to establish and pursue a program of research and development of certain anti-animal (BW) agents.” (a.k.a. biological weapons) The U.S. Department of Agriculture (USDA) took over from the Army in 1956.

President Richard Nixon ordered biological weapons research to cease in 1969, but in 1975 the U.S. Senate Select Committee on Intelligence revealed that the CIA had continued to maintain a stockpile of biological agents and toxins in violation of the order.