[ Editor’s Note: David, an American-Armenian, has a well crafted recap for us today on what a hoax the US, NATO, EU and UN’s concern is on fighting religious extremists terrorism, with both Turkey and Israel fully providing military and logistics support, for what is fast becoming a Jihad against what remains of the Armenian people.

Israel, who has long sold itself as the premiere victim of discrimination, has now jumped in with Turkey to keep Azeri attacks continuing to eventually win a war of attrition against Armenia to drive Christians from their ancestral lands.

No Israeli combat troops have to be involved at all because cheap, disposable, Jihadi terrorists are all the rage now for low budget combat terror troops.

Israeli Intel knows that the US is totally distracted now, as is the EU with growing Covid problems and increasing long term financial problems, and hence not looking to get involved in a war there they have no strategic interests at hand.

Their interest is in surviving the frying pan they are already in. But getting involved in combat is not a step they need to take. They can counter the military support going to Azerbaijan and put sanctions in place, the big one being on Azeri oil exports. They could do that in a jiffy with no domestic political blowback.

The term ‘failure of leadership’ is an age old perfect description of what is going on here, and on a huge scale. The US probably holds the number one position in our own Mr. Trump, who will go down in history at the worst US president in modern times.

But that stain will need to spread out to the extensive gang that he brought into his administration, to make examples of them that will need to be cleaned out and banished somehow, if possible.

As VT has editorialized heavily for a decade, all of the destabilization chaos that has been created going back to 9-11, when it really went ‘big league’, was done for criminal purposes to make huge amounts of money. And they were successful… Jim W. Dean ] 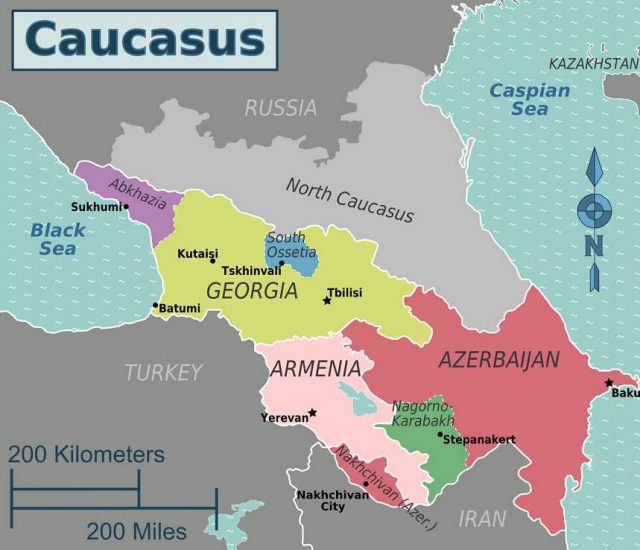 The vicious war against the Armenian Republic of Artsakh () and Armenia by Azerbaijan, Turkey, and thousands of their jihadist terrorists has passed the one month mark.

The jihadis’ presence, which includes ISIS, is consistent with the debauched political cultures and national ambitions of Azerbaijan and Turkey.  It also tells us that the U.S./NATO/EU stance towards those countries continues to be dangerously passive.

It’s not surprising.  Azerbaijan and Turkey are longtime Turkic allies of jihadist terrorists.

In the early 1920s, Soviet dictator Josef Stalin transferred the ancient Armenian territory of Artsakh (96% Armenian) to Azerbaijan to indulge Turkey.  No country/people named Azerbaijan/Azeri had ever existed before 1918.

Artsakh’s Armenians subsequently suffered brutal repression, deportations, and mass murders under Soviet Azerbaijan’s scimitar.  By 1988, Armenians had been reduced to 76% of the population.  All this was due to raw, ethno-racial, Azeri fanaticism.

Artsakh’s Armenians voted in 1988 and 1991 for self-determination and independence from Azerbaijan according to Soviet law and then international law.  Armenians won the ensuing war.

Note that Azerbaijan claims not only Artsakh but Armenia too. Artsakh and Armenia are reformist democracies.  Dictatorial Azerbaijan is light-years away from that.  Turkey is a similar political and human rights disaster.

If you lived in Artsakh, would you ever agree to Azeri rule?  Of course not.

The Global War on Terror (GWOT) has been American foreign policy’s pièce de résistance since 2001.  Supposedly, therefore, regimes that use jihadis/terrorists against civilized people should become pariahs.

Yet American administrations and Congress have acted largely deaf, dumb, and blind regarding Turkey and Azerbaijan’s support for jihadis/terrorists.

In 2016, I presented evidence to Richard M. Mills, U.S. Ambassador to Armenia, that Turkey supported ISIS.  He foolishly lied and denied it all.

The U.S. (and Europe) fawn over Azerbaijan’s gas and oil deposits and westbound pipelines despite its sickening record on jihadis and human rights. Our government lies about our GWOT, but we remain silent.  What kind of people are we?

Rename the GWOT to GWFT: the Global War for Terror.

Azerbaijan has signed and is violating the “UN Convention against the Recruitment, Use, Financing and Training of Mercenaries.”  Neither the UN, State Department, nor Congress has spoken up.

America provides “counterterrorism” assistance to Azerbaijan.  Thus, Americans pay it to fight terrorists while Azerbaijan turns around and hires terrorists.  This is sick stuff in which we as Americans are complicit.

Now consider the jihad against Armenian/Armenia/Artsakh by Israel and the Jewish American lobby.

Countless Jewish academicians, writers, human rights advocates, and elected officials have supported Armenian Genocide recognition and helped Armenians in other ways.  Not so for top Jewish organizations such as the ADL, AIPAC, AJC, and JINSA.

For decades, they have diminished/denied the Armenian Genocide and colluded with Turkey and Israel to defeat Armenian Genocide resolutions in Congress.  The ADL and AJC have relented a bit, though insincerely and only under pressure.

For years, Israel and most of these organizations, led by AJC, have supported Azerbaijan. Azerbaijani dictator Ilham Aliyev has given his country’s highest award to AJC Executive Director David Harris.

As Azerbaijan runs short of weapons and ammo, Israel is now sending more. There are 24 righteous Armenians in Israel’s Yad Vashem Holocaust memorial but no Azeris.  No problem, bomb the Armenian goyem anyway using Israeli weapons.

Meanwhile, scores of Jewish and Israeli writers defame Armenia and Armenian Americans. Israel always complains it’s the victim of terrorists and jihadis.  Now it’s on the same side as the jihadis and terrorists in Azerbaijan.

Countless Americans, including Christians, sell their souls to the Jewish lobby for political expediency, money, and career advancement and dare not whisper a word of dissent. You know who you are.

Meanwhile, Armenian Genocide 2.0 beckons. Artsakh’s ombudsman correctly notes that “various representatives of the international community are either blind or incapable.”

How long will this remain so?

Much of the author’s work can be found at http://www.armeniapedia.org/wiki/David_Boyajian.