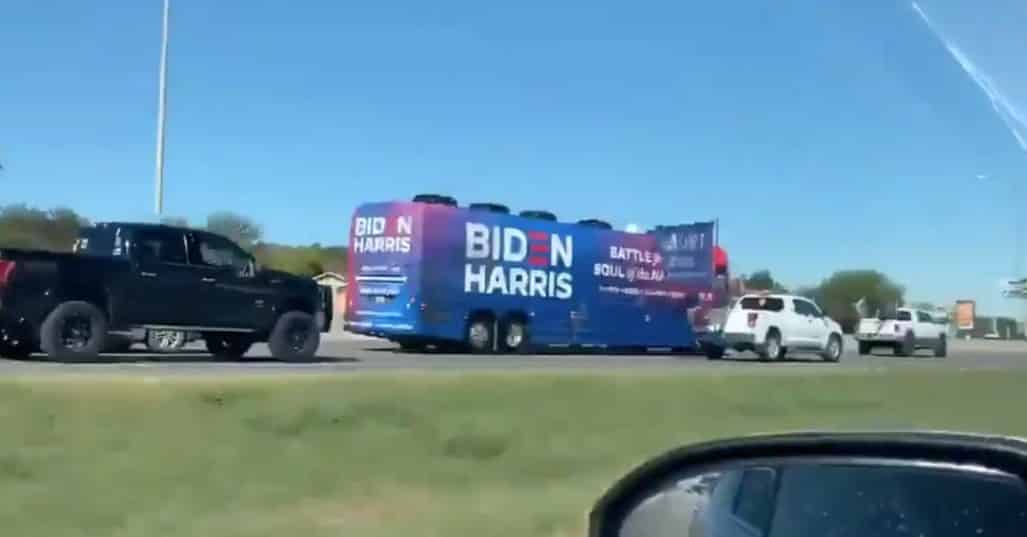 VT: An attempt to kidnap and arrest presidential candidate Joe Biden was unsuccessful today outside Austin, Texas.  Dozens of Proud Boy trucks filled with armed men ran the Biden bus off the road.  One staffer’s car was rammed into the median as well.

The  Proud Boys were, according to sources, planning to ‘arrest’ Biden and execute him for alleged crimes outlined in Trump tweets and on the QAnon website, ‘8chan.’

‘Trump Traitors,’ insiders at the White House that keep VT informed say that Trump ordered Biden killed.  Sources close to Trump say he has been increasingly agitated at the likelihood of facing prison for fraud and tax evasion in New York, criminal cases that would be filed the second he left office.

These criminal charges are likely to include Ivanka, Eric and Don Jr. who, we are told, will have their passports seized after the election, unless Biden is “gotten rid of.”

No, we aren’t kidding one bit.

The Biden campaign bus was pulled off I35 on the way to Austin, Texas by armed Trump supporters who had been following the bus for days.  Police accompanying Biden aided the Proud Boy contingent.  When asked why, they said it wasn’t their job to intervene, but in this case, they were clearly part of the problem.

Most of the Trump convoy of 35 vehicles included openly armed gang members with assault weapons.  Weapons were aimed at the bus Biden was riding in and an attempt was made to kidnap the former Vice President who they were going to put on trial as part of the QAnon “reset” as outlined here on ‘8chan.‘

Armed Texas Trump supporters surround and harass Biden/Harris campaign bus headed to an Austin rally. The pickup trucks with Trump flags were sitting along I-35, waiting to ambush the campaign bus and attempted to drive it off the road. #ONEV1 #DemVoice1 https://t.co/EhrNwCyHjU

One Biden staffer car was rammed by Proud Boys and pushed into the median.

I flew down to Texas to help with the Biden/Harris bus tour, intended to drum up enthusiasm at polling locations. Instead, I ended up spending the afternoon calling 911. 1/ pic.twitter.com/gKAjv7gv85

Pro-Trump police wearing ‘Thin Blue Line’ outfits, helped run the bus with Biden off the road where it was surrounded by gun toting “stand by” neo-Nazi militia members.

At least the Trump hearse is appropriate given the 200K+ Americans who have died due to his incompetence. #VoteHimOut pic.twitter.com/vUyhhKyceo