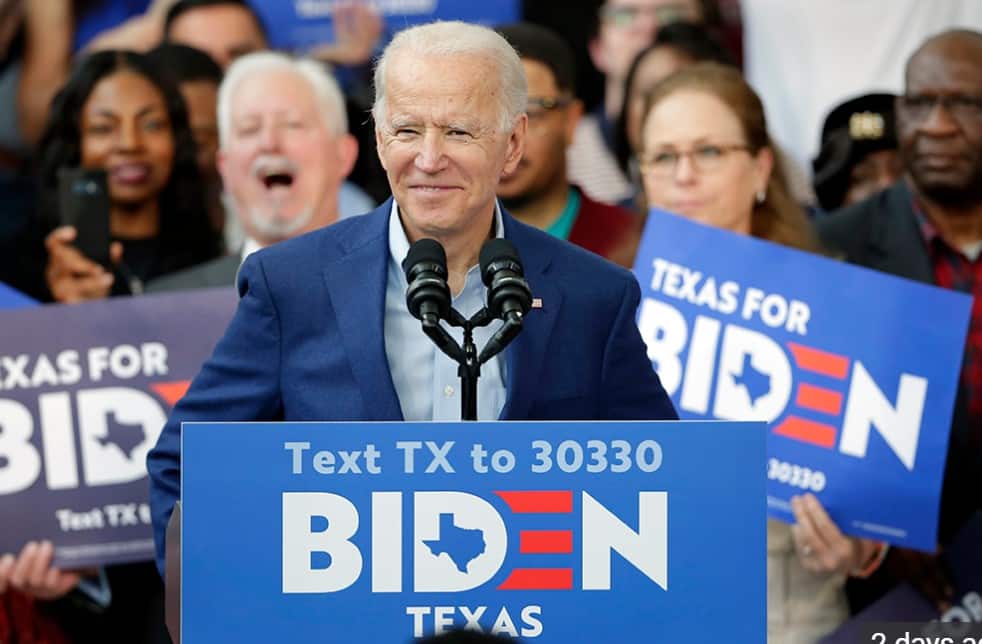 Texas is the secret key to Biden’s victory on Nov. 3.  While both he and Trump wrestle over battleground states such as Michigan, Pennsylvania, North Carolina, and Florida, they remain largely white, politically ambivalent targets that may prove too fractious a prize, Texas is the sleeping dragon, that if, Biden directed the last few days polishing their social media optics could very well lead him to a landslide victory of both electors and popular votes.

25 years ago the democratic flame dimmed with Governor Anne Richards’s departure. Since then Texas has been the largest red state in the Union. Yet signs of change began to sweep into the predominantly conservative consciousness of the state in 2018 with  Beto O’Rourke’s grassroots sweep through the widening political divide forming over the last two decades.  Though Cruz ultimately took the prize, Beto made significant headway, something thought impossible until it happened—and that was largely due to Betos youthful energetic optics. It didn’t matter that when he fumbled over-energetically, he had a look & appeal that Texans of different colors and class backgrounds could identify with.

Well, Joe Biden is far from that edgy Kennedyesque image, the optics are right for an even greater conversion from red to blue. This in no small way Has been made possible by the recent campaigning by Obama on behalf of Biden. While Trump has emphasized vulgarly large mask fewer crowds as an indefatigable sign of America’s indifference toward death, Biden, with Obama’s spiritual assistance, has imbued or imparted a more measured, deliberate and Humanistic vision of what a president should do in a time of crisis even if it’s optics seemingly appear Dall and meet on television.

The irony is it’s that very assumption of those orderly minimalistic optics, that the American people are clinging to now and millions as a gleaming light, I hope I can lead them through the tunnels of this awful Pandemic and it’s some sort of bright masculine new day. Most Americans realize that day is not now. Trump is trying to sell a false narrative out of desperation. Biden is selling a way out of Trump. And that right now sounds like A glass of ice lemonade On the hottest day in hell.

A win for Biden in Texas would also deal a heavy psychological blow to the Trump campaign and GOP constituency.  Thus faithless electors would think twice about flipping the popular vote.  Texas is the largest GOP stronghold that doesn’t penalize or disqualify faithless electors.  Hence, if Biden could mobilize a last-minute putsch on the lone star state, he could startle potential faithless electors in Texas ( and other battleground states like Pennsylvania, along with Florida and Michigan) to follow the popular vote, even against the pressures of GOP controlled state governments.

According to the most recent polls by researchers at the University of Texas Dallas, Biden leads Trump by 12 points in Texas.  Whether Biden’s significant lead in the polls, means Texas will once again turn blue, remains to be seen.  But with over 8.4 million votes in for early voting (94% of Vote in 2016), the likelihood of a blue surge remains high.   And more important than the polls which have in 2018 proven to be disastrously wrong, there are the optics that I keep referring to. Biden’s optics

Optics will determine who wins this election. The candidate with The better image on social media will find himself in the oval office come January 1, 2021. 2020 has been a year and optics, particularly with social distancing in place. Everything is a tweet, a zoom call, or an Instagram post.  That’s why Both the Times and the post Are reporting about the record number of younger voters in swing states such as Texas. Young Latinos, in particular to Texas are coming out like never before to vote. This surge is in part a product of social media taking the forefront due to the pandemic, and young white, black and most importantly Latino antipathy with 30 years of subtle racist, atavistic legislation, Constant lawsuits against the Obama federal government, the cow-towing of uncharismatic Leadership such as Ted Cruz And John Cornyn in the state/federal politics.

If Biden can surmount the impossible and seize the Golden Fleece of 38 electoral votes. Outcomes of other battleground states such as Florida, Arizona, Ohio Michigan, and Pennsylvania may fold into the fray.  It’s clear from nearly all polls that Biden will take  Pennsylvania and Ohio. He may even take North Carolina and Ohio where he holds slim leads, but all of the battleground states aren’t the sum of the total.

If Biden takes Texas, which trends appear to support, not only will this be the most shocking blow to the GOP, in combination with a handful of other battleground states, this will surely secure the presidency for Biden—despite any post-November 3 ballot counting or faithless electors issues. Texas is existentially posed to hand Biden the overwhelming Vegas on his bid for the White House.  Five days and likely several sleepless nights thereafter will decide.