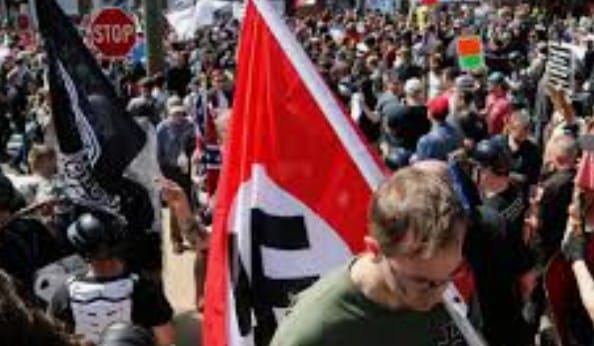 VT: Across the country, Proud Boys and MAGA militia types are blocking highways, setting up road blocks and brandishing weapons as an election disaster seems to be inevitable.

The message is clear, they are willing to kill to stop an orderly transfer of power, acting on the orders of renegade chief exec, Donnie Trumpstein.

Daily Beast: The FBI has begun investigating Friday’s reported “ambush” of a Biden-Harris campaign bus by pro-Trump demonstrators on a Texas highway, according to the Texas Tribune, which cited a law enforcement official.

The agency confirmed the news on Sunday, noting, “FBI San Antonio is aware of the incident and investigating. No further information is available at this time.”

A Biden campaign official described the group’s actions as an attempt to run the bus, which did not contain either Democratic Party candidate, off the road.

However, multiple sources confirmed that Wendy Davis, a Democratic challenger running in Texas’ 21st Congressional District, was on the bus. President Trump tweeted his support of the aggressive caravan after the incident, crowing, “I LOVE TEXAS!”

ANNA KOOIMAN (CO-HOST): Just set the scene for us yesterday because these images are startling when you see the traffic snarls caused by these protesters, disrupters.

SHERIFF PAUL BABEU: Well not only we had miles of backup of vehicles yet these protesters, we all appreciate and protect the First Amendment, freedom of speech and to rally, protest. Yet when you interfere with the public roads, you can’t block traffic. They had vehicles across the road, they had lots of people even tying themselves to the vehicles. And they were given multiple warning by officers to clear the roadway, even given ten minutes, and they still didn’t do that. So they were arrested. Three were arrested, and the rest got out of the way, and we had to tow a number of vehicles.

TUCKER CARLSON (CO-HOST): Hm. So in the name of combating fascism they’re committing it. Just to be clear since you’re a law enforcement official, it’s not legal to block the road even if you’re protesting something, correct?

BABEU: Oh absolutely not. And that’s where — look, we even established places for people to hold peaceful rallies, because we don’t want anybody to get injured. But you cant interfere or stop other people from holding a rally and you certainly can’t impede traffic and that’s what exactly what they did.