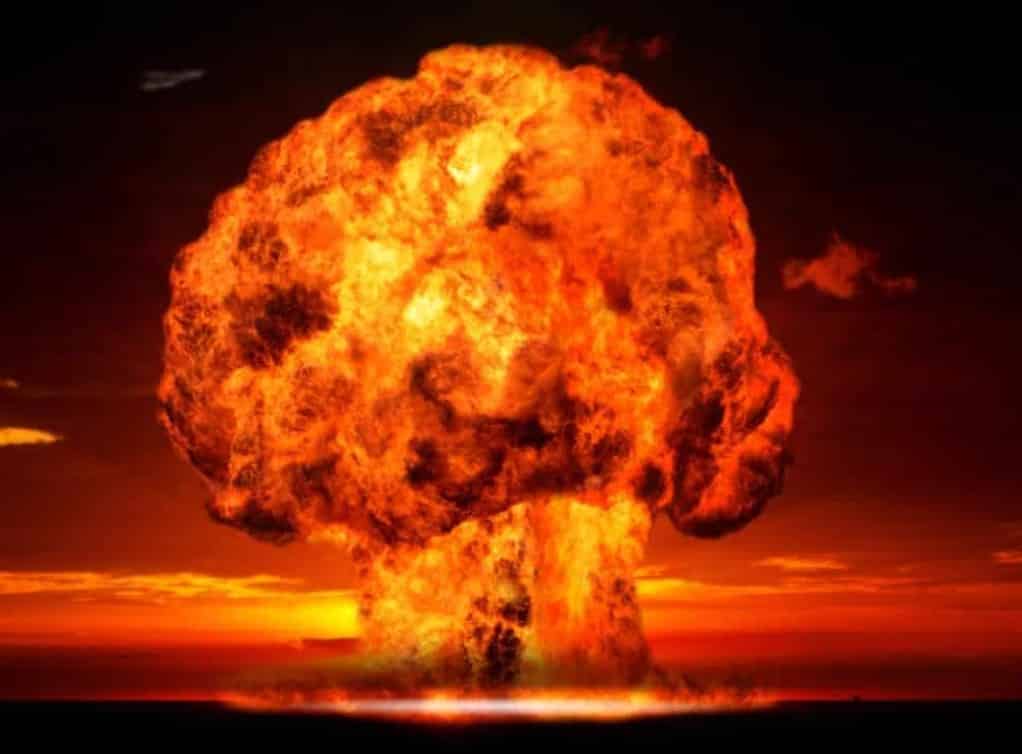 In private discussions with investigators from the IAEA, International Atomic Energy Agency, the UN’s nuclear non-proliferation investigators, they privately admitted that they have seen evidence of around 50 times nuclear weapons have been used since 1945.

The best known recent attack is the May 2013 attack on Damascus by what we have now been told by IAEA investigators was a nuclear tipped Lance missile fired from Israel.

The attack was in retaliation for the sinking, days before, of an Israeli Dolphin submarine by Syria. The Israeli sub had been picking up special operations teams planting sensors inside Syria and was sunk by a torpedo dropped from a Syrian helicopter on the night of May 2/3 at 2:30AM local time. The submarine was lost in 300 feet of water.

This was reported by local news and we have confirmed that Israel has kept this and the loss of a second Dolphin from the Israeli people through every means possible.

More frighteningly, only weeks ago, former Vice President Dick Cheney warned the American people of a possible nuclear terror attack. But then, as we will see, America has some experience with nuclear terrorism — a problem it has dealt with twice by classifying or quashing investigation reports.

What is clear is this: nuclear terrorism is a State crime, perhaps even “quasi-state,” a new level of super-governmental organization capable of even directing weapons development, controlling news — even murdering investigators and buying the complicity of certainly the American government.

For those unaware, a number of court decisions during the last few years, theoretically intended to increase “free speech” during the electoral process, have removed all restrictions on corporate donations to political candidates, even when the money is laundered through criminal organizations.

The VT Radio broadcast below, in particular beginning at minute 27, covers the issues discussed here.

Sources within the NSA have found that it is American oil firms that are aiding ISIS in the theft of oil from Iraq and Syria, paying them less than $25 per barrel, with the profits ending up as substantial donations to America’s opposition party, laundered — as the NSA tells — through Cuba and the Cayman Islands. We will follow this further.

In any discussion of nuclear terrorism, an obscure American investigation called “Able Danger” comes up. The American people were told, through interviews with Army whistleblower, or a seeming whistleblower at least, Lt. Col. Anthony Schaffer (ret.) that the CIA had covered up an investigation showing advance knowledge of 9/11.

Schaffer cited Saudi involvement only and has appeared on several talk shows and is now writing for InfoWars, a “free speech” website closely aligned with Wall Street interests but with a wild and conspiratorial aspect, actually much like America’s mainstream news in many ways.

9/11 becomes a nuclear discussion based on the release, in June, of the highly classified 2003 Department of Energy 9/11 Report citing the use of multiple nuclear weapons, two stage Thermobaric and Neutron weapons, in the destruction of the World Trade Center in New York.

The document contained pages of scientific calculations, discussions on weapons designs and effects and evidence from ground zero showing the direct effects of an attack using specially configured nuclear weapons that they traced to the Hanford reactor. This made the weapons American.

If this investigation, though released, still censored from the American press, with a strong “right hook,” the real knockout punch now comes from the release of portions of the highly classified Able Danger report. Able Danger wasn’t about Saudi hijackers — Able Danger began as an investigation between the FBI, CIA and IAEA into stolen nuclear weapons, also cited in the DOE 2003 report.

Able Danger began in 1996, a year after what they term the nuclear destruction of the Murrah Federal Building in Oklahoma City using nuclear weapons. The target of their investigation wasn’t domestic terrorists or a Middle Eastern group, but rather an organization made up of CIA, Mossad and Saudi Intelligence operating as espionage/terror cells inside the US.

The scope of the investigation covered the theft of nuclear weapons done with the help of an Israeli “mole” inside the US Department of Energy who supplied information, highly classified, on “nuclear pits,” allowing the use of partially decayed plutonium cores to be remanufactured into both large nuclear weapons or machined for use as tactical nukes by Israel.

Able Danger investigators, FBI, IAEA and CIA traced those thefts but also found something more dangerous. They discovered nuclear weapons being brought back into the US, such as the one used in Oklahoma City, damage almost identical to the nuclear attack on the Khobar Towers in Saudi Arabia. IAEA investigators cited, “Whenever there is a 6 meter crater and no bomb has been dropped from a plane, it will always indicate the use of a nuclear weapon.”

Inside the Pentagon, teams working for the US Navy, under the command of the Joint Chiefs of Staff, investigated falsification of records of nuclear inventories transferred from the Department of Defense to the Department of Energy, records of thousands of weapons intended to be decommissioned in accordance with START (Strategic Arms Limitations Treaty) agreements.

Over one third of America’s nuclear inventory was unaccounted for.

In the process, it was also discovered that over $2 trillion dollars was missing as well, an “accounting error” cited by Secretary of Defense Rumsfeld in a press release at the time.

When the attacks on 9/11 happened, few actually were ever told what really went on. The DOE report tells of nuclear weapons bringing down at least 3 buildings at the World Trade Center in exhaustive detail, even covering the exact parking spaces the white moving vans carrying the nuclear weapons were parked in.

The Able Danger Report covers the arrest of not only the “Dancing Israeli’s,” who had met with Mohammed Atta, but of other teams as well, including the team arrested attempting to destroy the George Washington Bridge by planting explosives on the New Jersey side of the bridge where the cables were attached.

Police recordings and news reports have all been scrubbed from public records other than the video records archived:

Other arrests were made of Israeli teams at the Lincoln and Holland Tunnels. All suspects, other than the “Dancing Israeli’s,” were flown back to Israel on one of only two non-military flights to operate in the United States and Canada the next day, the second returning the bin Laden family to Saudi Arabia.

The radio jammers they placed on buildings in Ft. Lee, near the bridge, that jammed fire department radios on 9/11 were recovered and have been held in evidence for these many years, found by teams from the Federal Communications Commission.

On 9/11, the Pentagon Able Danger team was ordered to attend an emergency briefing. No one showed up to speak to them but, while they were waiting, a Tomahawk Cruise Missile struck the room they were in killing all 35 attendees. They were listed as “accounting personnel” on the list of victims. They were CIS, JCS UDP investigators.

FBI Special Agent John O’Neill, original head of Able Danger was killed on 9/11 inside the World Trade Center. CIA head of Able Danger, Roland Carnaby was murdered in 2005 during a “routine traffic stop” by a Houston Police officer who, according to NSA sources, worked for the Mossad. Video of this is available.

A grand jury was set up in Houston, Texas, to investigate 9/11. Eight years later, there has been no word from them. Materials received on the Able Danger investigation, however, may explain why.

According to witness statements and intercepts, 9/11 was not planned by Osama bin Laden. The “hands on” planners include someone best known as a Director of the Department of Homeland Security, a mayor of New York City, a police commissioner of New York City and a well-known US Attorney.

Broader claims as to who controlled this group and other groups, blackmail/prostitution rings in Washington, the AIPAC spy ring from the 2006 arrests and more including the nuclear weapons theft organization were said to include a Prime Minister of South Africa, a head of state of a small Middle Eastern country with a non-Islamic government and powerful individuals involved in financial dealings, gambling, liquor and the best known fund manager on Wall Street, very much a household name.

The list included people not only “above the law” but who obviously “own the law.”

Gordon Duff is a Vietnam War Marine combat veteran who has worked on veterans and POW issues for decades and consulted with governments challenged by security issues; and is a senior editor and chairman of the board of VT, especially for the online magazine “New Eastern Outlook”.