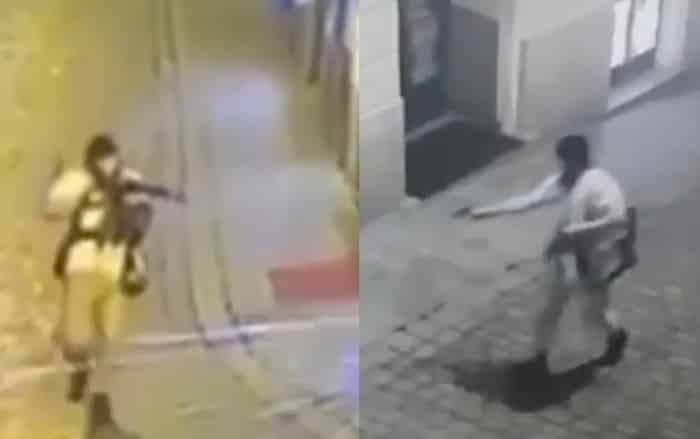 At least one video of those circulated on the net reports the cry of Islamic terrorists (of Sunni origin) “Allah Akbar”. This was reported by Russia Today on the simultaneous armed attack carried out by a commando in Vienna which resulted in the death of 4 people, three civilians and an attacker, and the wounding of 15 others.

The toll, however, could worsen because 7 of them, including which a policeman sustained serious injuries. After the first two victims, a woman died from the serious injuries sustained in the attack in Vienna tonight. This was reported by the mayor of the Austrian capital Michael Ludwig, quoted by the website of the newspaper Kronen Zeitung. In the middle of the night, another of the patients died.

Official confirmations are still lacking but about the jihadist matrix of the attack that began around 20 (UTC) near the synagogue in Schwedenplatz in Vienna and some offices of the Jewish community, according to the Austrian media, few doubts remain after a public claim has been made by a Muslim extremist group. At least one of the terrorists is still on the run and the police have urged people not to leave their homes.

The assault was allegedly the work of several bombers, one of whom was killed with an explosive belt. “It was 8 pm and gunshots were reported – said the Austrian Interior Minister Karl Nehammer, speaking of the first moments of the attack -. Police cars went to the scene. Then at the same time in other points of the city ​​there have been other attacks “.

“The jihadists released a statement claiming responsibility for the terrorist attack in Vienna late on Monday, according to SITE Intelligence Group, an American company that claims to monitor the information activity of extremists,” Sputnik International reported.

Daesh supporters, according to SITE, are “joyful” as they describe the authors as “lions” and claim that the Vienna attack is “part of the bill” Austria owes for its involvement in the US-led coalition fighting against the Daesh terrorist group. The latter is also known as ISIS or ISIL (Islamic State founded by Caliph Al Baghdadi in Mosul in Iraq).

The attack came just hours before Austria imposed new national restrictions to try to stem the growing cases of coronavirus. Many people were out enjoying the bars and restaurants which are now closed until the end of November. It seems that the attackers, with their faces distorted, fired with semi-automatic weapons and in particular the AK 47 Kalashnikov, the favorite rifle of Islamic terrorists.

The premeditated terrorist act occurs a few days after the attack in Nice, France, in which an illegal Tunisian immigrant, who landed on the Italian island of Lampedusa and then arrived on the Côte d’Azur, killed the sacristan of the Basilica of Notre Dame and slaughtered them. two faithful in prayer.

But it follows another event of apparent religious origin that took place in recent days, again in the Austrian capital, due to the hooligan assault on a church by about thirty young people of presumably Turkish nationality.

«The incident at the St. Anton church in Vienna’s Favoriten district happened on Thursday evening. It was reported a day later by the Kurier newspaper, which said investigators suspect the intruders were Turkish youths who had organized via social media – wrote online newspaper KruxNow – Police said a priest called police when the youths started kicking the furniture, and that they dispersed in several directions before officers arrived. No damage was caused and no people were hurt or threatened, according to a police statement Saturday. The local branch of the domestic intelligence agency was looking into the matter».

The incident came at a time of heightened tensions over attacks in France and the French president’s vow to protect the right to caricature Muhammad, a stance the Turkish president has assailed. Chancellor Sebastian Kurz on Friday night tweeted theKurier report with the comment: “All Christians must be able to exercise their belief in Austria freely and safely! We will continue the fight against political Islam with determination and will show no false tolerance.” A few days later, there is the terrible and deadly armed attack.

MIT, the secret services of Turkey, has been repeatedly accused by the Kurdish and Syrian media of favoring the recruitment, training and transfer to Syria, Libya but also to Europe of Al Qaeda or ISIS jihadists, used as mercenaries in the conflict zones in the Middle East, in Afrin as in Tripoli. Turkish counterintelligence allegedly used the same tactic as Saudi Arabia in Yemen: first arresting the jihadist extremists and then freeing them only on condition that they fight for the country’s interests alongside regular armies.

If the synagogue had actually been one of the chosen targets of the attack on Vienna, it would be the third attack in just over 40 years. In April 1979 a kilogram of plastic explosives exploded in the courtyard of the Viennese synagogue and the attack was claimed by a Palestinian terrorist group. In August 1981, Palestinian terrorism again hit the Seitenstett synagogue, killing two people and seriously injuring 21.