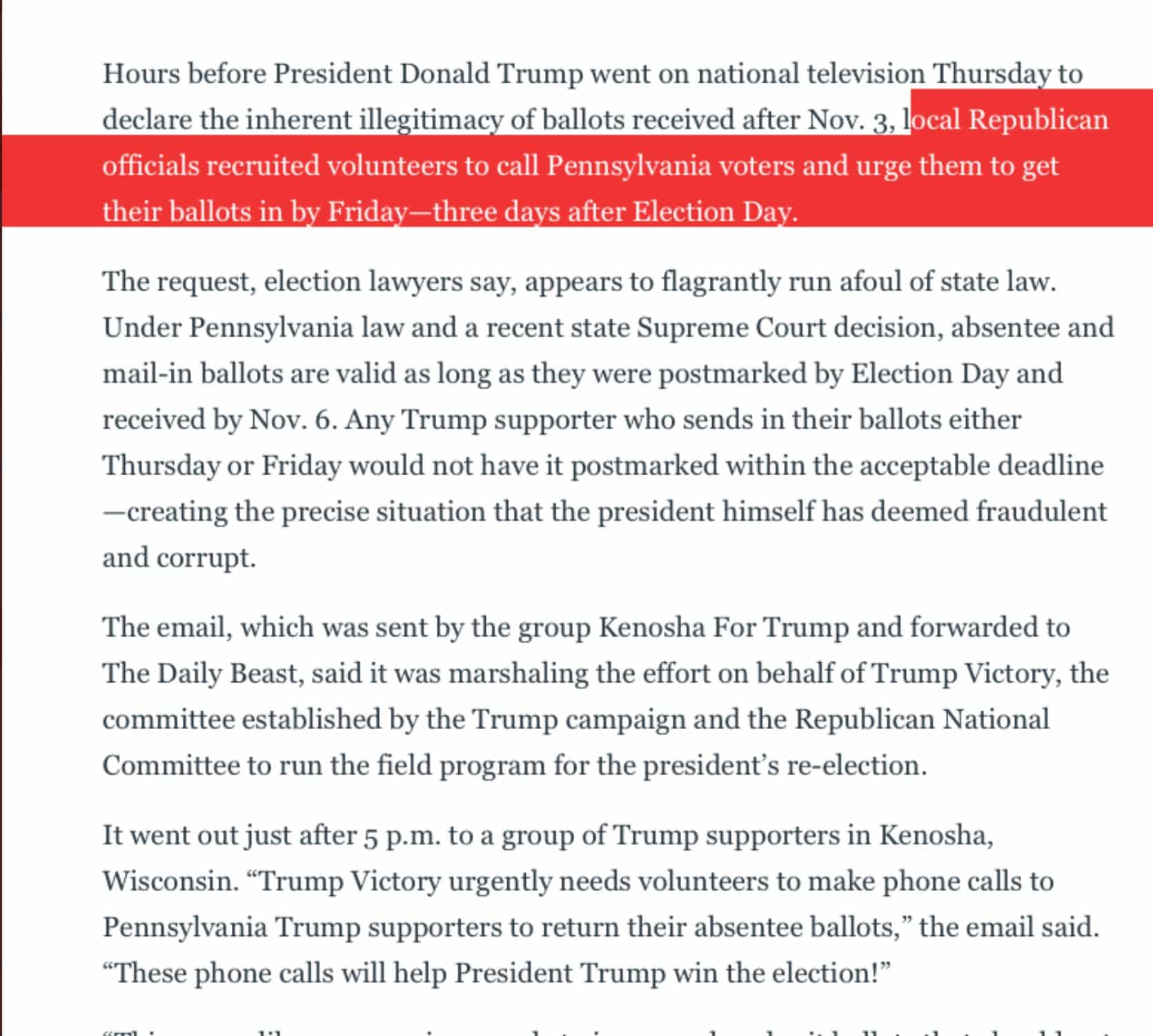 President Donald Trump is often criticized for psychological projection, where his guilty conscience accuses his opponents of committing his own schemes.

This is some really 4th dimensional chess stuff: solicit PA Republicans to commit voter fraud to make the election look fraudulent to cause courts to throw out election results—after using the Supreme Court to force late ballots to be segregated so that can’t happen. LOL https://t.co/g6DC6laKZ2

Trump has been arguing that there was widespread voter fraud, but without providing any evidence.

Republicans may have just provided such evidence in a way that backfired spectacularly.

BREAKING: I've examined one of these emails provided by the reporter. It appears to be a real message, sent w @Mailchimp . https://t.co/yOAbXLfw4I pic.twitter.com/xwx9Q89bi6

“Hours before President Donald Trump went on national television Thursday to declare the inherent illegitimacy of ballots received after Nov. 3, local Republican officials recruited volunteers to call Pennsylvania voters and urge them to get their ballots in by Friday—three days after Election Day,” The Daily Beast reported late Thursday evening.

“The request, election lawyers say, appears to flagrantly run afoul of state law. Under Pennsylvania law and a recent state Supreme Court decision, absentee and mail-in ballots are valid as long as they were postmarked by Election Day and received by Nov. 6. Any Trump supporter who sends in their ballots either Thursday or Friday would not have it postmarked within the acceptable deadline—creating the precise situation that the president himself has deemed fraudulent and corrupt,” The Beast explained.

“The email, which was sent by the group Kenosha For Trump and forwarded to The Daily Beast, said it was marshaling the effort on behalf of Trump Victory, the committee established by the Trump campaign and the Republican National Committee to run the field program for the president’s re-election,” The Beast noted.

The Beast interviewed Jonathan Diaz, the chief counsel for the Campaign Legal Center.

“This seems like encouraging people to improperly submit ballots that should not be counted,” Diaz noted. “That would be exactly what the president and his campaign are accusing Democrats of doing.”

Attorney Ben Geffen of the Public Interest Law Center in Philadelphia wondered if there might be a darker motivation.

“I wonder if they’re doing this in hopes of slipping one through and then waving it around as an example of the flawed process,” Geffen said. “The real story is, it sounds like the Trump campaign is promoting cheating.”