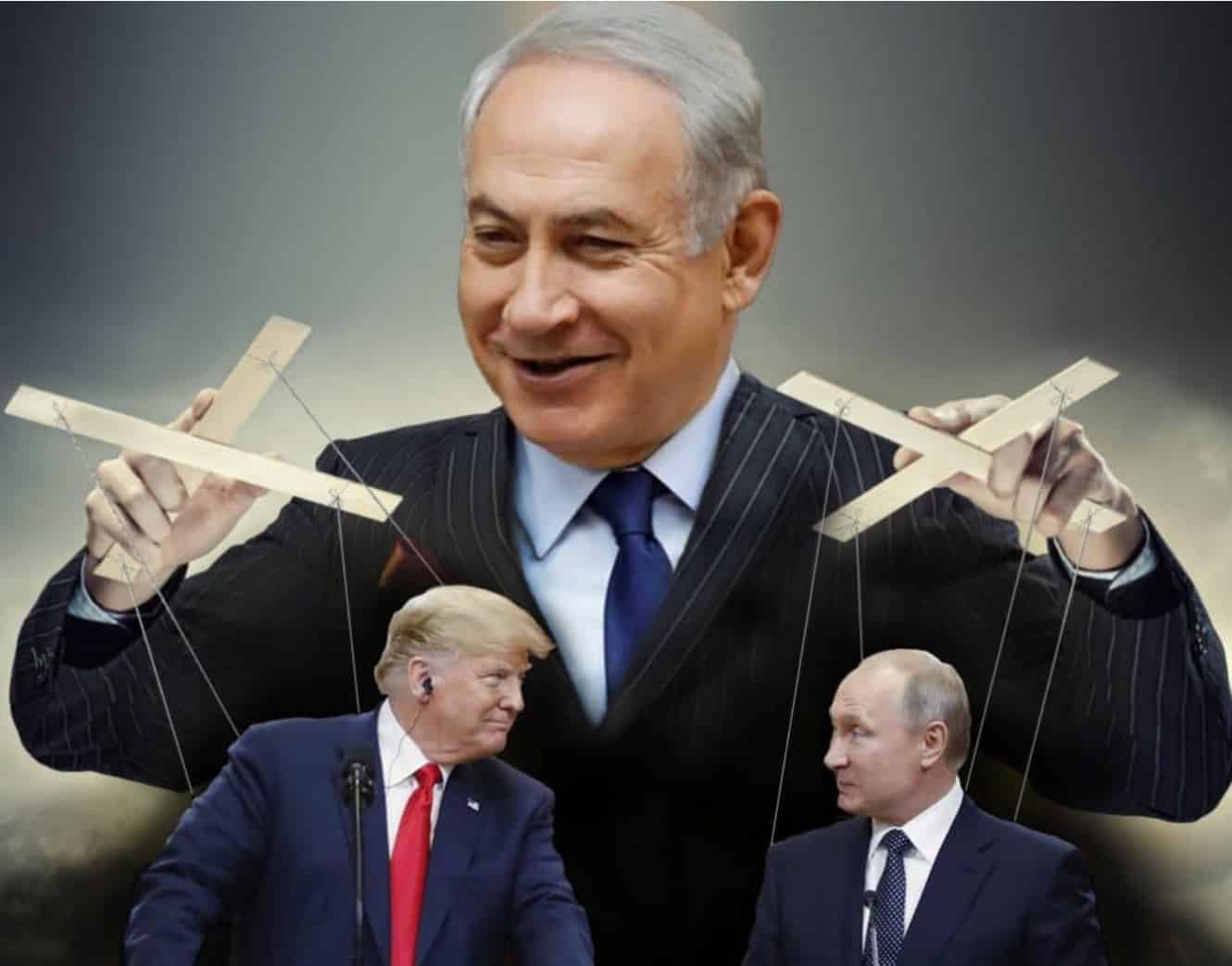 If you translate these two tweets from Nuttin’yahoo, you can see how utterly fucked Israel is going to be.

Congratulations @JoeBiden and @KamalaHarris. Joe, we’ve had a long & warm personal relationship for nearly 40 years, and I know you as a great friend of Israel. I look forward to working with both of you to further strengthen the special alliance between the U.S. and Israel.

“Congratulations @JoeBiden and @KamalaHarris. Joe, we’ve had a long & warm personal relationship for nearly 40 years, and I know you as a great friend of Israel,” Netanyahu wrote on his personal Twitter account at 7 a.m. in Israel (midnight EST), more than 12 hours after US media networks called the presidency for Biden.

Analysts pointed out that in his tweets and subsequent remarks to the cabinet, Netanyahu did not address Biden as “president-elect” and did not explicitly state that the former vice president and Delaware senator had won the elections.

In a second tweet, he thanked President Donald Trump “for the friendship you have shown the state of Israel and me personally, for recognizing Jerusalem and the Golan, for standing up to Iran, for the historic peace accords and for bringing the American-Israeli alliance to unprecedented heights.”

Later in the day, Netanyahu made nearly identical comments about Biden and Trump at the start of the weekly cabinet meeting.

Rivlin issued a lengthy statement sent out by his spokespeople, issued at exactly the same time as Netanyahu’s tweet, and did specify that Biden had won the presidency.

“I send the blessings of the Israeli people and of the State of Israel, to our friend Joe Biden on your election as the 46th President of the United States of America. I also send congratulations and best wishes for your success, Vice President-elect Kamala Harris,” he said.

“Mr. President-elect, as a longstanding friend of Israel, you are now the leader of the free world and of the State of Israel’s closest and most important ally. The strategic alliance between our two countries and peoples is stronger than any political leadership, and is not based solely on friendship. It is rooted deeply in our shared values and in our longstanding commitment to freedom and democracy as the foundations of our societies.”

In his statement, Rivlin also said he wanted to thank the incumbent president for “four years of partnership in strengthening Israel’s security, and to thank the American people for their steadfast support and friendship.”

“I have no doubt that our special relations and multifaceted cooperation will continue to flourish and grow in the future,” he went on.

“On behalf of the Israeli people, I wish you and your future administration great success, and extend my invitation to you to visit Jerusalem as our guest.”

Later on Sunday, Rivlin recorded and posted on his YouTube channel a video with a similar message. He recalled hosting Biden in Jerusalem in 2016, when he was vice president. “As a longstanding friend of Israel, you are now going to be the leader of the free world and of Israel’s closest and most important ally. Our bond is more than friendship. It is based on values, on our shared commitment to freedom and democracy,” he said.

The fact that Netanyahu and Rivlin took 12 hours after all major American networks projected that Biden had beaten Trump — and long after most world leaders had done so — was a source of concern for some.

Opposition leader Yair Lapid, who was the first Israeli politician to congratulate Biden on Saturday evening, said it was “cowardly and shameful” that the country’s top leadership remained silent, and “hurts Israeli interests.”

Lapid added: “If the French president, German chancellor and British prime minister can do it, so can you.”

Former Israeli ambassador to the US Michael Oren said the Americans pay very close attention to what’s being said about developments in their country, warning that a failure by Netanyahu to acknowledge Biden’s win could negatively impact the upcoming administration’s relationship with the Israeli government.

“That will not be forgotten quickly,” he told the i24news television channel on Saturday night, prior to Netanyahu making his comments.

“As the election results become final, I extend my heartfelt congratulations to @JoeBiden, a long-time supporter and friend of Israel, and to his running mate, @KamalaHarris, who has made history as the first woman elected VP.” Gantz tweeted in English at around 4 a.m. Israel time, just as Biden was delivering his victory speech.

“I look forward to continuing to deepen the steadfast bond and strong defense ties between our peoples, as allies in the effort to strengthen democracy, stability, and peace worldwide,” added Gantz, who is alternate prime minister and slated to replace Netanyahu in November 2021, 11 months after Biden is set to take office.

Gantz, the head of the Blue and White party, also thanked Trump for being “committed to [Israel’s] security and invested in its future.”

“The Middle East has taken major steps forward thanks to the president’s bold leadership over these four years, and for that we are immensely grateful,” he wrote.

He said Biden’s “friendship and distinguished record of support for Israel dates back nearly half a century. I strongly believe that under his leadership the strategic indispensable alliance between our two countries will continue to flourish and prosper.” He did not include a message thanking Trump.

On Saturday evening, congratulations to Biden and his running mate, Kamala Harris, poured in from all over the world, including from all major European states and most countries in the Arab world.

Netanyahu had built a close relationship with Trump and his administration, which reversed decades of US policy by recognizing Israeli sovereignty over Jerusalem and the Golan Heights, and removing opposition to Israeli settlement building in the West Bank. Netanyahu’s close ties with Trump and Republicans in his corner had led to concerns of a loss of bipartisan support for Israel in Washington.

In contrast, Gantz and Trump only met once publicly, for brief talks ahead of the unveiling of the administration’s Middle East peace plan in January, while he was still running against Netanyahu. After entering the government, he was kept out of US-brokered talks about normalization with other Arab states. 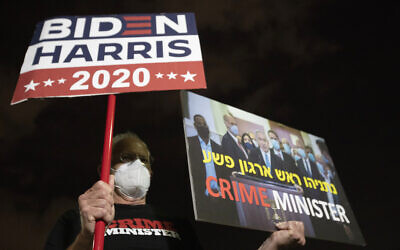 Trump has refused to concede defeat, making unsubstantiated allegations of serious fraud and vowing to take his case to the courts.

The Walla news site on Saturday evening quoted unnamed sources close to Netanyahu saying that he was “waiting for the official results,” which may not be finalized for several days as states certify their vote counts.

At the same time, Walla and Kan news reported that the prime minister’s office instructed ministers of his Likud party to convey two messages in press interviews: that Israel can work well with Biden, just as it worked with Trump; and that they hope Biden will continue to push Arab countries to normalize relations with Israel and to stand up to Iran, and won’t reverse the Trump administration’s decision to recognize Israeli sovereignty over the Golan Heights.

Netanyahu, who also has a close personal relationship with Biden, made some effort to stay out of the presidential race. Last month, he deflected a question by Trump about whether his rival would have been able to broker a normalization agreement between Israel and Sudan.

“Do you think Sleepy Joe could have made this deal, Bibi?” Trump asked the prime minister during an October 24 phone call with Sudanese leaders during which the deal was announced. “Somehow, I don’t think so.”

After a few seconds’ pause, Netanyahu replied: “Well, Mr. President, one thing I can tell you is we appreciate the help for peace from anyone in America. And we appreciate what you’ve done enormously.”