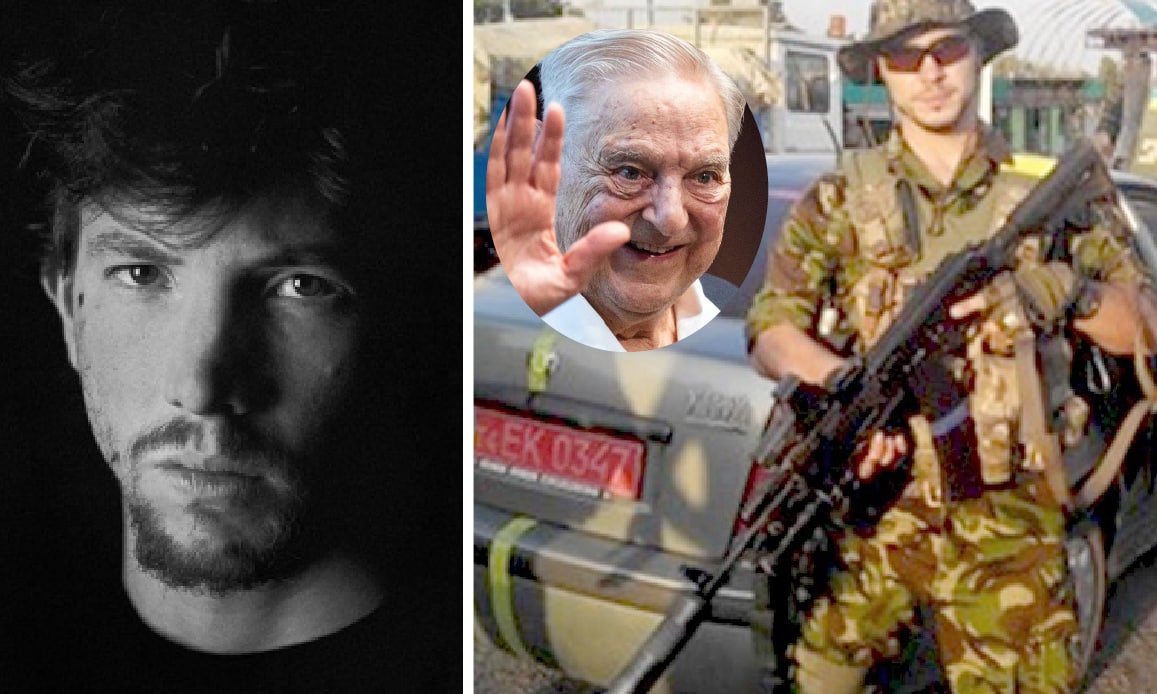 The Italian journalist Andrea Rocchelli was not only murdered at the age of 30 in the Donbass where he was doing his reports on the civil war. On 24 May 2014 he was in fact the victim of a cruel and premeditated execution by the paramilitary troops of the Ukrainian National Guard (NGU) conducted with a “bulls-eye shooting” using a mortar in a village near Slaviansk, in Eastern Ukraine, where he found with his other murdered colleague, the Russian interpreter and photographer Andrei Mironov, and a Frenchman who survived by a miracle.

This is the story of some eyewitnesses cited by InsideOver, the online column of Italian newspaper Il Giornale, which also reveals the mugshots of the two victims with the red word “deleted” published on a site controlled by the SBU (Služba Bezpeky Ukrayiny) Security Services of Ukraine.

This was the sense of the sentence with which the Court of Assizes of Pavia had condemned the only defendant for that crime, in the face of the evidence collected scrupulously by the Pavia prosecutor Giorgio Reposo in a long investigation at the end of which he also sent the documents to the Prosecutor’s Office of Rome to investigate another alleged accomplice of the NGU warriors.

But now the Milan Court of Appeal has canceled the sentence with a blow with the sponge, acquitting the militiaman with an Italian-Ukrainian passport Vitaly Markiv. The soldier of the Ukrainian National Guard, accused of the murder of the photographer and journalist from Pavia during a military operation, was sentenced in first instance to 24 years in prison on 12 July 2019. The Court of Assizes of Appeal of Milan acquitted him for “not having committed the deed”, ordering his immediate release.

The death of Andy and Andrej screamed and screams for revenge to protect all those brave media workers who reach the war theaters in search of the most uncomfortable truths to tell. Especially when these truths are buried behind the wall of lies artfully constructed by the mainstream media to cover up the geopolitical dynamics and often murderous intrigues of the secret services.

For an ominous and merciless coincidence of fate, the sentence came on November 3 while one of the main architects of the Orange Revolution in Ukraine culminating in the bloody coup in Kiev, former US vice president Joe Biden, faced Election Day to become the 46th American president (as the media already believes, although the ballot of all the votes in some crucial states like Nevada and Pennsylvania is not yet finished at all).

WAR IN THE DONBASS: INTELLIGENCE’S INTRIGUES

Gospa News dedicated dozens of reportages to Ukraine, also lingering on the bloody plots (with the massacre of Majdan Nezaležnosti square by Georgian snipers on which no one investigates) and on the sensational alliances that arose from that plan for the scientific elimination of Russian influence in the country strategic ex Soviet Union because of the border with the new Christian Orthodox empire of Tsar Vladimir Putin.

We talked about the revolutionary route started by George Soros through his Ukrainian foundation Renaissance International (also involved in funding research on the SARS virus), the “impossible” alliance between the Zionists of the Israeli war industries and the neo-Nazis of the Azov Battalion and the curious story of that journalist of Afghan origin, a Sunni Muslim, who started the protests in the square renamed EuroMaidan, who in recent months became deputy general director of the national war industry in Ukraine.

The acquittal of the militiaman Markiv after a first-degree condemnation which is unexceptionable in substance and form despite the pressure of the Kiev government and those of political movements close to Soros such as “Europa +”, therefore, disgusts us but does not disturb us.

«We will see the reasons for the sentence and we will see what to do. We continue to believe that the reconstruction that emerged from the investigations of the Pavia investigators and the Milan public prosecutor’s office is correct: our gratitude goes to them and our lawyers, ”said Elisa Signori, Andrea Rocchelli’s mother immediately after the sentence.

Pending the contents of the disconcerting decision of the Milanese Appeal judges, we refer to the previous article for details on the episode and the reasons for the previous sentence, recalling only that in the NGU to which Markiv belonged, in fact, various groups of voluntary militias of the Pravyj Sector converged (Right Sector) but also the infamous neo-Nazi ultra-right Azov Battalion, accused by Amnesty International of torture.

Today we try to do at least a moral justice to our fallen colleague in the performance of his reporter service by publishing part of the excellent article by other journalists who went to the civil war-torn Donbass after him. But before going into the details of the shocking testimony on target shooting against Rocchelli, for a level playing field, let us report the praises woven by a representative of the government of Kiev towards Italian justice.

THE ARRESTED MINISTER AND THE ACQUITTED MILITIAN

«I want to express my compliments to the Italian judicial system. The Court of Appeal acknowledged our arguments and made a good decision “. The Ukrainian Minister of the Interior, Arsen Avakov, said this outside the courtroom of the Palazzo di Giustizia in Milan after the acquittal of Vitaly Markiv “The truth is that we too want to know all the details regarding Rocchelli’s death – he added Avakov as reported by Agenzia Nova – I am sure that the facts will emerge publicly and we will all know the truth. The whole of Ukraine has been following this case and everyone is happy. “

Minister Avakov is indirectly involved in the affair as since 2014 he has directed the formation of the Ukrainian National Guard (NGU), being the only politician to have retained his position in the strategic Interior Department also by virtue of the excellent diplomatic relations with the Israeli’s Interior Minister, and consequently also with the secret services of Shin Bet (internal) and Mossad (foreign counterespionage) that refer to it, and with the USA (therefore also with the Central Intelligence Agency) but above all with NATO which since 2017 has an Information and Documentation Center in Ukraine.

Avakov himself in the past found himself having to deal with the Italian justice that pardoned him for political reasons. In 2012 he ended up in prison in Frosinone following an international arrest warrant for abuse of office following an investigation launched in his country and was later released thanks to his election as parliamentarian in the ranks of the Popular Front, Narodnij Front by Arseny Yatsenyuk, the former premier supported by American President Barack Obama and by the Open Ukraine foundation, funded since 2007 at the KSF (Kiev Security Forum) by Renaissance International, the Ukrainian operational arm of George Soros’ Open Society Foundation.

TARGET SHOOTING AGAINST THE TWO REPORTERS

This is why it seems only right to give space and consider the contents of the investigation published by Andrea Sceresini and Alfredo Bosco last October 27 in the InsideOver column of Il Giornale to be absolutely credible.

“It was August 2017, when soldier Alexander Vladimirovich Rakityansky and his commander” Zhora “agreed to meet us in a public park on the outskirts of Donetsk, in eastern Ukraine. Rakityansky and “Zhora” – both militiamen of the pro-Russian army – were the two men who on 25 May 2014 recovered the lifeless bodies of the Pavia reporter Andy Rocchelli and his Russian colleague, the journalist Andrei Mironov in the countryside on the outskirts of Sloviansk” .

The Italian journalists wrote in a heartfelt and detailed article in which they also publish a fact sheet on the two reporters still present on the website of the “Myrotvorets Center”, a “control body” linked to SBU (Služba Bezpeky Ukrayiny) the Ukrainian security services.

«The page is easily accessible with a few clicks: just write the name and surname of the person you want to find in the search engine, in the “Purgatory” section. On the names of both journalists appears the unequivocal red writing in Cyrillic characters – “ликвидирован” – “liquidated”» explained.

“The Italian was lying in a fetal position, with many wounds all over his body, while the Russian was beheaded by the explosions – the eyewitnesses told Sceresini and Bosco – It was hard, but in the end we were able to load them into the car and take them away “.

“Andy and Andrei had been killed the day before, while – armed with cameras – they were documenting the clashes between separatist militiamen and Ukrainian soldiers at the foot of Karachun hill, on whose summit the Kiev army units were entrenched. It was from that hill, on the afternoon of May 24, that the mortar rounds that murdered the two reporters would have started “, reads on InsideOver.

“The whole area was perfectly visible from the top of the hill – the two men in uniform confided to the Italian reporters during the interview – It was a target practice, as is done at the shooting range”. (read more)