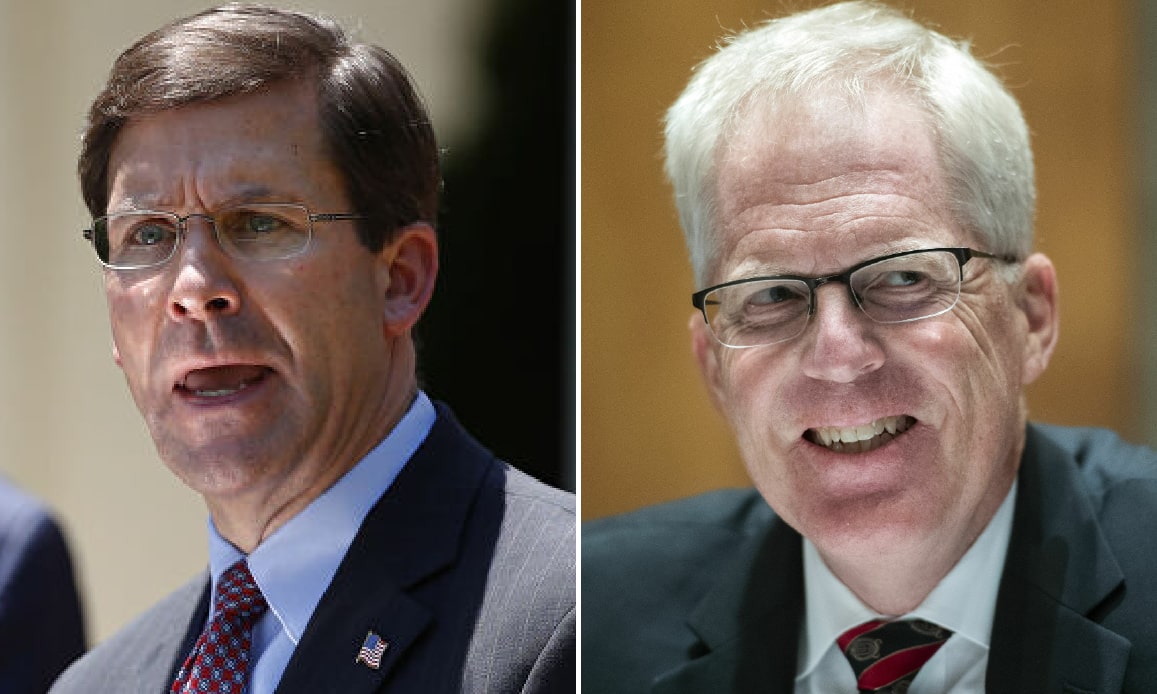 Donald Trump’s counter-offensive has started and the climate is night of long knives. Thus, after the electoral defeat, the first head to fall is that of Pentagon chief Mark Esper, one of the names at the top of the outgoing president’s blacklist, for the lack of support provided on the Obamagate dossier investigation but also for the fatal refusal to send the army to Minneapolis and Portland after the riots caused by the Black Lives Matter movement and the urban guerrillas of the Antifa.

A long list of senior officials deemed unfaithful and accused of betraying him. After the first purge to tremble are now names of the caliber of William Barr, Minister of Justice, Christopher Wray, head of the FBI, Gina Haspel, director of the CIA. All figures recently hit by the president’s arrows, especially angry at the failure to launch an investigation into the Biden and for having waited in vain for the announced report on the origin of the Russiagate investigation and following Ukrainagate. Report that in his view should have revealed the Obama administration’s plot against him, supported by Deep State too as admitted by former CIA director John Brennan.

The new secretary of defense will be, effective immediately, the head of counterterrorism, Christopher Miller. But but he will remain in office until the beginning of January when, barring sensational twists following the lawsuits that Trump will file with the Supreme Court on the outcome of the votes, Democratic President Joe Biden will take office and appoint his staff.

In pole position for next leadership in the Pentagon in the new administration is Michèle Flournoy, former Undersecretary of Defense for politics with Obama from 2009 to 2012, who recently published a dossier on the need for the use of Artificial Intelligence for military purposes together with the former deputy director of the CIA, Avril Haines, former deputy adviser from the White House for Obama and for years a loyalist of Biden. Haines also became famous for heralding the coronavirus pandemic in 2018 and being among the protagonists of the Event 201 exercise held in October 2019 and funded by Bill Gates.

By Tim Korso for Sputnik International

Esper’s spokesperson earlier dismissed rumours of him filing for resignation, while media outlets reported that Trump was not considering replacing him in the near future.

US President Donald Trump has announced that he is replacing Mark Esper with Director of the National Counterterrorism Centre Christopher C. Miller, who will become the acting secretary of defence. POTUS also thanked Esper for his service.

…Chris will do a GREAT job! Mark Esper has been terminated. I would like to thank him for his service.

Hours after Trump announced the move, a letter written by Esper to the commander-in-chief surfaced online. It stated that the now former US defense official accepted the decision and that he has “never been prouder to serve my country than as a soldier or civilian in the Department of Defense.”

Trump’s decision comes following continued speculation in the media about Esper’s potential departure from the White House amid POTUS’ projected defeat in the presidential race. The Hill reported on 6 November, citing anonymous sources, that Esper might be among the administration members that Trump would fire regardless of the outcome of the election, or that he might even file for resignation himself.

A conflicting report from Politico on 7 November, also citing anonymous sources, suggested instead that Esper would stay on in the Trump administration. Two prominent Republican senators, Majority Leader Mitch McConnell and Jim Inhofe, urged POTUS “to not shake things up” and keep Esper in his office. Esper’s spokesperson, in turn, dismissed the rumours that the secretary of defence might file for resignation himself, calling them untrue.

Christopher C. Miller has served most of his life in the US military, ending his service as a Green Beret in 2014. Trump nominated him for the post of director of the National Counterterrorism Centre in May 2020 and Miller was successfully vetted by the Congress in August, replacing acting Director Lora Shiao.