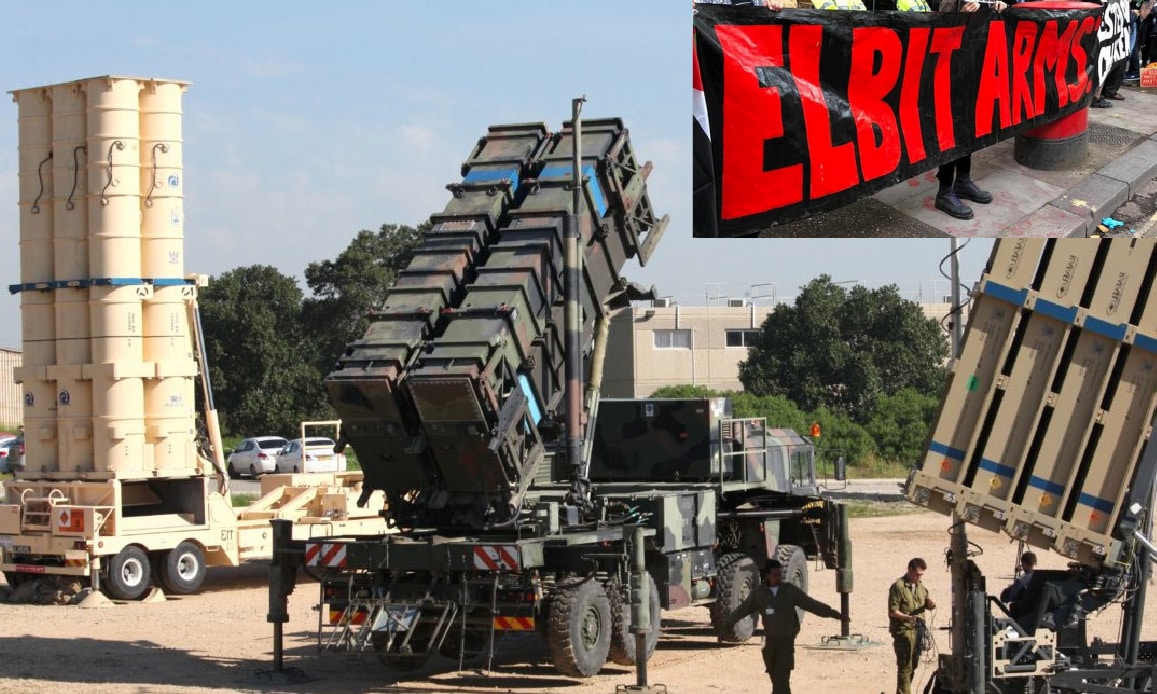 Two very intereting articles by Middle East Monitor about relationship between US and Israel. As highlighted by previous report the Israeli Weapons Lobby business is supported by Zionistic Freemasonry, as confirmed when B’nai B’rith lodge in Washington awarded the Elbit’s tycoon Michael Federmann for his philantropy like the Queen Elizabeth who conferred HIM the prestigious MBE, Member of the Most Excellent Order of the British Empire.

LOBBY WEAPONS – 3: THE ZIONIST KING OF DRONES AND MERCHANT OF DEATH

A few days ago a massive protests erupted in front of Elbit factories in the Balfour anniversary, the day in which in Novembre, 2, 1917, Arthur James Balfour, I count of Balfour and United Kingdom’s Prime Minister, signed the deal for birth of Israel’s nation in Palestine with the baron Walter Rothschild, eldest son of Baron Nathan (1840-1915), 1st British Baron Rothschild and great-grandson of the Askenazi Jewish banker Mayer Amschel Bauer (1744-1812), founder of the financial dynasty of the Red Shield, inspirer of the Illuminati of Bavaria and one of the promoters of the attempt at reconciliation between the English and Franco-German Scottish Rite Freemasonry in the Wilhelmsbad Congress of 1782 (see reportage The Holocaust of Communist Freemasons).

The arms market in Israel is booming after the privatization of the national industries IMI (Israel Military Industries) purchased by Elbit and IWI (Israel Weapons Industries) which managed to build international alliances so strong as to sell the semi-automatic rifle Tavor even to the Ukrainian neo-Nazis of the Azov Battalion.

IRON DOME FOR US MILITARY

The first of two Multi-Mission Radars (MMR), the tracking system behind Israel’s Iron Dome air defence system, has been delivered to the United States (US) Army. Produced by ELTA, a subsidiary of Israel Aerospace Industries (IAI), the second radar is to be delivered by February 2021, according to the Jerusalem Post.

The MMR has been widely deployed and operationally integrated by partners around the world, ELTA said in a press release. “The MMR radar is operational in Israel and other countries,” said Yoav Tourgeman, IAI vice president and CEO of ELTA.

“We are proud to supply our most advanced systems to our allies, the US Army. The MMR radar addresses a broad range of needs by locating and tracking incoming rockets and artillery shells and by providing a comprehensive aerial situation assessment. The MMR radar will maintain our allies’ military edge. The demand for mobile, combat-proven MMR systems is on the rise.”

In September, the first of two Israeli Iron Dome missile defence batteries were delivered to the US military, a year after a deal for their purchase was signed. Developed by Rafael Advanced Defence Systems and IAI, the system will be used “in the defence of US troops against a variety of ballistic and aerial threats,” according to a Defence Ministry statement.

The second battery will be delivered “in the near future within the framework of the agreement,” the statement added. The fully mobile system carries ten kilogrammes of explosives and can intercept an incoming projectile from four to 70 kilometres away. The US and Israel already cooperate extensively on security matters. Israel’s big three defence companies, Elbit Systems, IAI and Rafael, have numerous cooperative projects with America.

Factories belonging to Israel’s largest arms manufacturer, Elbit system, woke up this morning to groups of protesters demanding their closure. Protests led by the direct action campaign group Palestine Action, were organised to coincide with the anniversary of the infamous Balfour Declaration of 1917, which the campaign group say had “paved the way for the ethnic cleansing of Palestine and the violent dispossession of 750,000 Palestinian.”

Activists simultaneously blocked Elbit’s many subsidiaries in the UK forcing three of their weapons factories to shut down. They sprayed red paint on the premises in what looks to be a symbol of Palestinian blood spilled by weapons manufactured by the firm. The activists claim that Elbit weapons are marketed as “field tested” on Palestinian civilians, notably Gazans who are mostly children and refugees.

They also claim that both the UK Maritime and Coastguard Agency, as well as the UK police, have been trialling Elbit’s drones to mass-surveil large stretches of our coastline, in line with the Home Secretary, Priti Patel’s, militarisation of the English Channel. The EU’s border agency Frontex is also said to have contracted Elbit to surveil the Mediterranean, leaving the lives of migrants, refugees and asylum seekers, fleeing war torn countries, in mortal danger.

Elbit Systems is also accused of playing a key role in the development of Trump’s militarised US/Mexico border wall, while the very same technologies are also being used to securitise and control the native O’odham people on Arizona’s indigenous reserve. Palestine Action says that it is “a new grassroots network of anti-racist groups and individuals taking direct action to end UK complicity with Israel’s colonial and Apartheid regime.”

The group claims to have targeted Elbit over 40 times, and has promised to “routinely, systematically, continue to escalate its actions until the British Government and this evil arms company can no longer profit from the death of Palestinian civilians.” “The ultimate aim is to shut Elbit down and end all UK complicity with Israeli apartheid.”