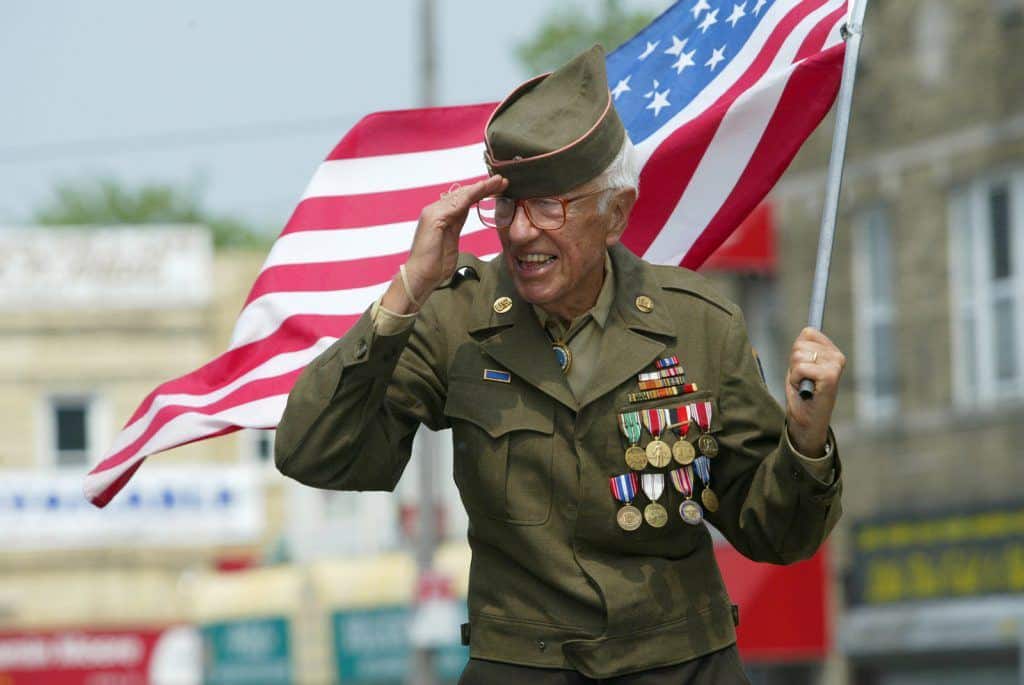 In 2019, nearly 18 million American veterans accounted for approximately 7% of the US population. Numerous veterans memorials exist in the United States to honor and remember service members who participated in the US armed Forces. In addition to providing recognition to US service personnel, memorials provide a designated space for veterans and their family members to share experiences and to hopefully provide a common ground for healing. The following are just a few of the veteran memorials that commemorate, celebrate and honor service of U.S. military members past and present.

Perhaps one of the most recognizable of the many veteran war memorials in the United States is the U.S. Marine Corps Memorial. The monument, a bronze, granite, and concrete structure, was fashioned from an award-winning photograph. Completed in 1954, the statue depicts five servicemen raising the American flag on the captured Japanese island of Iwo Jima during the second world war. The statue is the tallest bronze statue in the world and features 30-foot figures erecting a 60-foot flagpole with an actual cloth American flag. The sculpture’s total height measures 78-ft and weighs 100 tons. While the monument depicts World War II soldiers, it honors all American Marine veterans, including those who lost their lives fighting in U.S. wars. The memorial is located on a hill in Arlington, Virginia overlooking the Potomac River and the U.S. Capitol.

The Korean War veterans memorial on the National Mall in Washington, DC, comprises 3 monuments honoring 5.8 million American veterans of the Korean War; The Statues, The Mural Wall, and The Pool of Remembrance. The memorial also features The United Nations Wall, which includes engraved markers to represent service members from 22 nations that fought against the Koreans.

The Statues consist of 19 sculpted soldiers casted in stainless steel. The statues, measuring 7-ft tall, stand on a section of granite among low-lying juniper patches to resemble soldiers moving through the rice fields of Korea. The 19 soldiers represent the leaders and various members of a typical squad including scouts, gunners rifleman, medics, and a radio operator.

Near the statues, the 41-panel Mural Wall incorporates over 2,400 photographs from the war etched into the reflective granite surface. The Mural Wall mirrors the 19 statues creating the illusion of 38 soldiers to symbolize the 38 months of war fought at the 38th Parallel.

In 1942, at the height of World War ll, 29 young men from the Navajo Nation were recruited into the United States Marines to conduct espionage for the Allied Forces in the Pacific theater. Their mission was to create an impenetrable communications code using the unwritten Navajo language. Those recruits, along with several hundred other Navajo recruits, would become known as the Navajo Code Talkers. Their contribution is considered one of the crucial elements that led to the Allied Forces’ victory that would eventually bring the war to an end.

In 1980, a 16-ft bronze statue featuring a Navajo Code Talker using his field radio to transmit code, was unveiled to honor and celebrate over 400 Navajo Marines who participated in the mission. The statue is located at the Wesley Bolin Memorial Park in Phoenix, Arizona.

Located in Washington, DC at the National Mall, The World War ll Memorial is situated near the Lincoln Memorial Reflecting Pool. The expansive memorial honors not only the 400,000 veterans who sacrificed their lives, but also pays tribute to more than 16,000,000 soldiers and civilians for their contributions to the war effort.

Covering 7.4 acres, the memorial includes a large plaza with a grand fountain in the center. Surrounding the fountain are 56, 17-foot granite pillars placed in two semicircles. Two majestic 43-ft arches stand at each end, symbolizing victory in the Pacific and in the Atlantic. Scenes of the war are depicted in bronze-relief on several walls throughout the plaza, along with the Freedom Wall, featuring 4,048 gold stars. Each star represents 100 American soldiers lost in battle.

Over 175 regiments, composed of almost 210,000 African-American troops, fought for the Union Army and Navy during the Civil War. In 1997, The Spirit of Freedom, a 9-ft bronze statue was dedicated in memoriam to those soldiers. On one side, the statue depicts a sailor and three infantrymen standing guard over freedom. The other side features a soldier with his family and young children. A Wall of Honor inscribed with the names of 209,145 African-American soldiers surrounds the statue. The monument is part of the African-American Civil War Memorial located in Washington, DC.

Dedicated in 2014, the American Veterans Disabled for Life Memorial, is an award-winning site dedicated to honoring disabled veteran’s sacrifice in all United States wars and conflicts.

The main component of the memorial is a monument made up of images of wounded soldiers and 18 quotes from disabled veterans and their caregivers, etched into 48 glass panels measuring 48 x 106-inches and weighing 1,800 pounds.

The Vietnam War Memorial incorporates several features, with the first phase, The Wall, completed and dedicated on Veterans Day in 1982. The Wall was designed by Maya Linn, then a 21-year-old architect student at Yale University. The black granite Wall consists of 140 continuous panels in the shape of a chevron, with etched names of over 58,000 soldiers killed and missing in action during the Vietnam war. The Wall is recessed into the ground with the height of the wall flush with the earth surrounding it. The monument is located at the west end of the Constitution Gardens on the National Mall.

In 1984, an additional monument was added to the memorial. The Three Servicemen Statue represents service members who returned from the war. The statue faces The Wall to imply the servicemen are keeping watch over the fallen soldiers. The Three Servicemen; Caucasian, African American, and Hispanic, represent the three main ethnicities of American Vietnam War veterans.