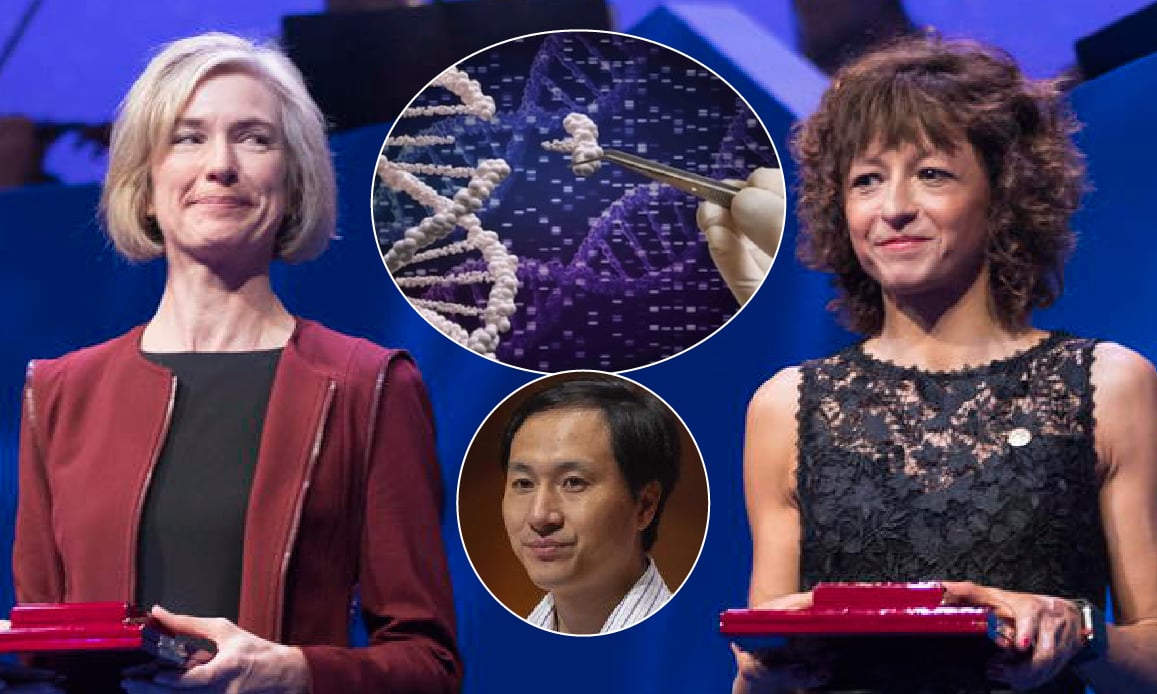 How far can science and technology go to reach new heights in the advancement of research? While bio-ethics experts are still asking this disturbing question that concerns not only the heart, the mind but above all the soul of humanity, the international community applauds two of the protagonists who made possible the birth of “Frankenstein’s daughters”.

«The Nobel Prize in Chemistry this year is divided equally between the French biochemist Emmanuelle Charpentier and the American chemist Jennifer A. Doudna, the two researchers who have developed the technique that cuts and glues the DNA that allows to rewrite the code of life. Genetic scissors, which make it possible to modify DNA, have opened the way to many therapies that were once impossible» writes the ANSA Italian agency without mentioning the actual treatments in which the “genome editing” has already been successfully applied.

The Crispr / Cas9 discovered by the two researchers is the most powerful revolutionary kit in the hands of genetic engineering today.

«In fact, it can be used with a very high-precision instrument (perhaps more like a scalpel than molecular scissors) to modify the genetic information (DNA) of animals, plants and microorganisms. Presented for the first time in 2012, the technique has allowed to revolutionize research in the Life Sciences, bringing it into a new era, and has so far helped to open new avenues for the treatment of many diseases, from some forms of cancer to cystic fibrosis, to the point of approaching the dream of curing hereditary diseases».

The Italian news agency adds, unbalancing on “futuristic” therapies but omitting the fundamental detail that precisely this sophisticated biochemical technique was experimented by the American Doudna on human embryos and this opened the doors to the chilling experiments of a researcher who in 2018 gave birth in China the first newborns with modified DNA. That experiment ignited a bitter debate within the scientific community precisely in relation to the limits not yet drawn by the nations regarding genetic manipulation.

Lula and Nana, this is the name given to the girls, were considered the first transhuman creatures and their “scientific father” He Jiankui, the Chinese doctor of the Southern University of Science and Technology in Shenzhen who announced the birth of the twins with DNA modified to obtain immunization from HIV, in December 2019 he was sentenced by the court of Shenzhen to three years in prison for illegal medical practice and fined 3 million yuan, equal to about 430 thousand dollars.

Little thing compared to the acquired worldwide fame and the announcements of the Chinese authorities who had promised “serious punishment” for the geneticist, blaming the results of his unauthorized experiment as “bad science”.

As illustrated in a substantial investigation then carried out by Gospa News on the affair, we dedicated a large paragraph to the two researchers who are now awarded the Nobel Prize in Chemistry. Emmanuelle Charpentier, born in 1968 in Juvisy-sur-Orge, completed her studies at the Pasteur Institute and currently works in Berlin, Germany, where she directs the Max Planck Unit Institute for Pathogen Sciences. Jennifer A. Doudna was born in 1964 in Washington and, after studying at Harvard University, moved to the University of California at Berkeley, where she currently works.

In that dossier which also analyzed the phenomenon of so-called Transhumanism, that is the scientific culture aimed at building super-human and financed by many Silicon Valley gurus, we highlighted that Doudna himself boasted in the scientific conferences of 2015 and a year later on the BBC to have grasped the potential of Crispr Cas9 in the modification of the genome not only of various organisms such as Bread Yeast, Zebra Fish, Fruit Fly, Plants, Mice, Monkeys but also of Human Embryos.

Precisely for this reason, if the Chinese geneticist convicted of manipulating the DNA of the two girls can be considered the “scientific father”, the biochemists today awarded one of the most coveted world awards may well be considered the “technological stepmothers” of the transhuman twins, although not having participated in the aberrant childbirth, son of the genetic editing they created.

The discovery of Crispr occurred almost by chance starting from Charpentier’s research on the bacterium Streptococcus pyogenes, responsible for inflammation in humans, in particular with the discovery of a fragment of the genetic heritage used by the bacterium as a weapon to fight viruses.

In the same year of the discovery, 2011, Charpentier began to collaborate with Jennifer Doudna to reconstruct the bacterium’s weapon in a test tube, in order to simplify it, transforming it into an easier to use tool. In just one year, the two researchers obtained molecular scissors capable of cutting the molecule of life, the DNA, and of doing it with precision, in a specific site in order to rewrite the code of life.

Since 2012 the Crispr / Cas9 technique has been used all over the world, in a real explosion of applications. Including the shocking one for the birth of Lula and Nana adopted by the Chinese geneticist He Jiankui who, as reported by the Xinhua news agency, was found guilty of “illegally carrying out genetic manipulation of embryos for reproductive purposes”.

He Jankui defended himself from the accusations by claiming to have altered the genes of the twin daughters of an HIV-positive father in order to make them immune to the HIV virus, but the experiment does not seem to have achieved the desired results.

«To raise new doubts about the genetic mutation were recently some geneticists from Berkeley (USA), arguing in a study published in Nature Medecine that the DNA cut-and-sew technique, in addition to not guaranteeing the desired effects, would lead to a mortality risk greater than 21%» wrote Italian newspaper Repubblica at the time.

The Asian scientist explained that he had “silenced” the cellular receptor CCR5, to which the AIDS virus binds, with the aim of obtaining genetic resistance to the HIV virus and, in the future, to switch to smallpox and cholera. Beyond the genetic mess and the controversy aroused in the world of medical science for the ethical implications, it was the magazine Mit Technology Review of the homonymous institute in Boston, to anticipate sensational revelations, as reported by Gospa News.

«New research shows that the same alteration introduced in the DNA of the girls, the deletion of a gene called CCR5, not only makes the mice smarter but also improves the recovery of the human brain after stroke, and could be linked to a greater success at school» wrote Antonio Regalado, senior editor of biomedicine in the journal MIT Technology Review, hypothesising that genetic manipulation could improve cognition and memory.

As detailed in our previous article, the science journalist highlighted a study conducted by Alcino J. Silva, a neurobiologist at the University of California, Los Angeles, who in commenting on the case of the twins was resolute: «Simple is that those mutations will likely have an impact on cognitive function in the twins». But since, according to the same doctor interviewed, the «exact effect on cognition is impossible to predict, this is why it should not have been done».

This is why, in the face of an unexplored world that can drag scientific research into the hell of Transhumanism, the Nobel Prize in Chemistry could have been destined for other protagonists in order to avoid incensing the “stepmothers of Frankenstein’s daughters” who, despite not having had active part in the experiment, they inspired it through research on human embryos.

Rewarding them instead means wanting to clear progress at any cost at the expense of any bio-ethical consideration. But as explained in the previous report, the financiers of transhumanist theories are among the most powerful and richest on earth…

It therefore becomes easy to compare these very dangerous chemical experiments to the bacteriological ones on the SARS virus infected with HIV conducted in Wuhan and financed by the European Commission and the American government agency USAID, instrument of the Central Intelligence Agency, and by the foundation of Bill Gates, many years before the SARS-COV-2 pandemic devastated the world with its high contagiousness.

The variable lethality of Covid-19, as demonstrated in our 21 WuhanGates investigations, was in fact attributed by various virology and bioengineering experts to the characteristics of a gently modified organism in the laboratory, as claimed by former British counterintelligence director MI 6, Richard Dearlove, by human rights lawyer Robert F. Kennedy jr, and ultimately by Hong Kong researcher who fled to the US and now protected by the FBI, Li-Meng Yan.