Deputy Attorney General Dina Zilber lambasted the government and Prime Minister Netanyahu on Sunday, likening the premier’s attacks on the judiciary and other opponents to the Protocols of the Elders of Zion, a notorious fabricated anti-Semitic text from 1903 purporting to describe a Jewish cabal plotting global domination.

In a lengthy speech broadcast during an online conference by the Israel Democracy Institute, Zilber railed against repeated claims by the premier and his allies that his indictment on graft charges is part of a “judicial coup” carried out by a network of shadowy unelected figures seeking to overthrow the government.

“Sometimes, in order to not admit the truth of a lack of leadership, the fan is turned on to blow the blame in all directions,” Zilber said.

“Instead of looking inward, they look away and… create an imaginary reality of a prosecution within the prosecution, or of a state of bureaucrats scheming in the darkness, plotting a judicial coup. Add some blood to the mix and you have — with a twist — a crazy comeback of the Protocols of the Bureaucrats of Zion,” she said. “A culture of scapegoating instead of taking responsibility.”

Zilber herself has been the subject of many attacks in recent years by Netanyahu allies who slammed decisions by her that they described as leftist.

However, in September Netanyahu quietly extended her term by three months, angering members of the Yamina party, which is to the right of Likud. Zilber’s term is currently scheduled to conclude at the end of December. 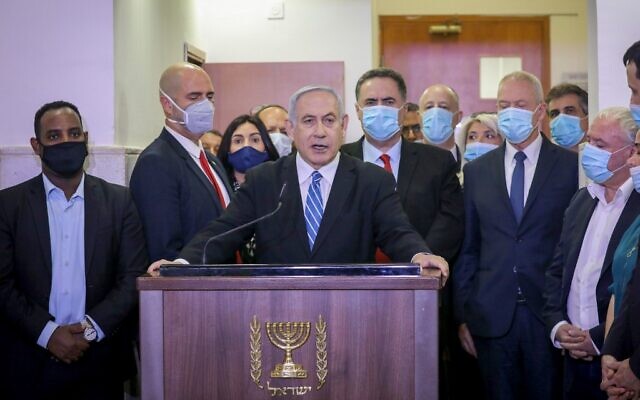 Prime Minister Benjamin Netanyahu delivers a statement before entering a courtroom at the Jerusalem District Court on May 24, 2020, for the start of his corruption trial. Among those alongside him from left are Likud MKs and ministers Gadi Yevarkan, Amir Ohana, Miri Regev, Nir Barkat, Israel Katz, Tzachi Hanegbi, Yoav Gallant, and David Amsalem. (Yonatan SINDEL / POOL / AFP)

Netanyahu is charged with corruption in three cases, including bribery in one of them. He denies any wrongdoing and has derided the cases as a politically motivated witch-hunt by police, prosecutors, the media, the left, and the courts.

Critics of the premier say his attacks on the law enforcement system and on weekly protests against him, coupled with the destabilizing effects of the coronavirus, are major causes for a deeply polarizing atmosphere that has settled over Israel, and fear deadly violence could follow.

Netanyahu has been butting heads with Zilber’s boss, Attorney General Avichai Mandelblit, claiming he was blackmailed and forced to file the charges against him. Lately, Netanyahu has repeatedly rejected a legal opinion by Mandelblit barring the premier from intervening in any the appointments of any senior law enforcement officials related to the investigations or the trial against him. Mandelblit says his decision is legally binding.

In her comments, Zilber said: “The Emperor’s New Clothes over the past few years have been the discourse about the capacity to govern,” referring to constant complaints by Netanyahu and his allies that interventions by various officials hinder their ability to effectively govern.

She went on to list a lengthy register of past targets of Netanyahu and terms used by him to describe political opponents:

“The capacity to govern is the extravagant clothing made of the best materials by the best tailors in order to enable governance and policymaking, if only that isn’t hindered by the judges; legal advisers; Finance Ministry officials; the biased media; the anti-patriotic academia; the elitist culture world living at our expense and tarring our name internationally; satire shows that harm the national morale; consciousness manipulators; Wexner Foundation alumni; the New Israel Fund; the briny leftists; Arabs; or those who have forgotten what it means to be Jewish,” she said.

“The discourse about the capacity to govern is the most effective spin factory to cover up for leadership failures,” Zilber said, adding another literary reference. “[English political writer] Samuel Johnson said: ‘Patriotism is the last refuge of the scoundrel.’ And the discourse about the ability to govern is sometimes the last refuge of the fake leader,” she charged.

She then said that, at its essence, the concept of the ability to govern is vital for democracy, but it should be “healthy” and include “leadership; setting out a vision, a direction, goals; creating a broad national agreement about the necessary action, ensuring public trust in the leadership, taking action for the benefit of the citizens, even those who didn’t elect the government.”

Zilber alleged that vital steps, such as making permanent appointments to dozens of senior roles, were being blocked — and not by any court or bureaucrat. She also said that steps that would improve the governability, like reducing the number of ministries and getting rid of bureaucratic mechanisms, were not being pursued.

She concluded by calling for “unifying” discourse and solidarity instead of the current, “inflammatory” rhetoric.