And from the University Medical Center in El Paso, a nurse reports…

… have witnessed preferential treatment for a doctor’s wife, who was the sole COVID-19 survivor on that floor.

VT has many of these reports and some of ours are first hand of widespread racial and economic prejudice that has led to increased deaths among black and Hispanic COVID patients.

Going to ruin the USA. All while gasping for breath on 100% Vapotherm. They tell you there must be another reason they are sick. They call you names and ask why you have to wear all that “stuff” because they don’t have COViD because it’s not real. Yes. This really happens. And

Covid is a hoax. Pass it on. pic.twitter.com/VyPxb2otdh

Daily Beast: Video of inmates in El Paso, Texas, moving the bodies of COVID-19 patients for $2 an hour has sparked outrage—and now a top official says he’s asking the National Guard to come in and take over morgue duty.

I can’t stop thinking about it. These people really think this isn’t going to happen to them. And then they stop yelling at you when they get intubated. It’s like a fucking horror movie that never ends. There’s no credits that roll. You just go back and do it all over again.

I’m posting these eye witness testimonials because some of you still sadly think all of this is a hoax….Nurse describes 'horrific' conditions inside El Paso, Texas, hospital https://t.co/RAQjTcIBJC

El Paso County Judge Ricardo Samaniego said there were other options than to use the prisoners, who have protective equipment, because of the surge in virus case numbers and fatalities. “If there’s no personnel, no one to help out, and there’s volunteers, even if they are inmates, then that’s what we’re left with,” he told KFOX14.

I know it happens. My daughter tried explaining to a woman her 35yo son just died from COVID (she works UofM COVID ward). Woman argued that wasn’t possible. Trump said only the elderly were effected, besides, COVID was a democratic hoax. Going to sue the hospital for malpractice.

The county reported 1,550 new coronavirus cases and seven deaths on Monday, and half the patients in the hospital have COVID. Samaniego said it’s not clear if the military will help out. “It has not been confirmed that they would be able to take over the demand that we have at this time,” he said.

And from South Dakota 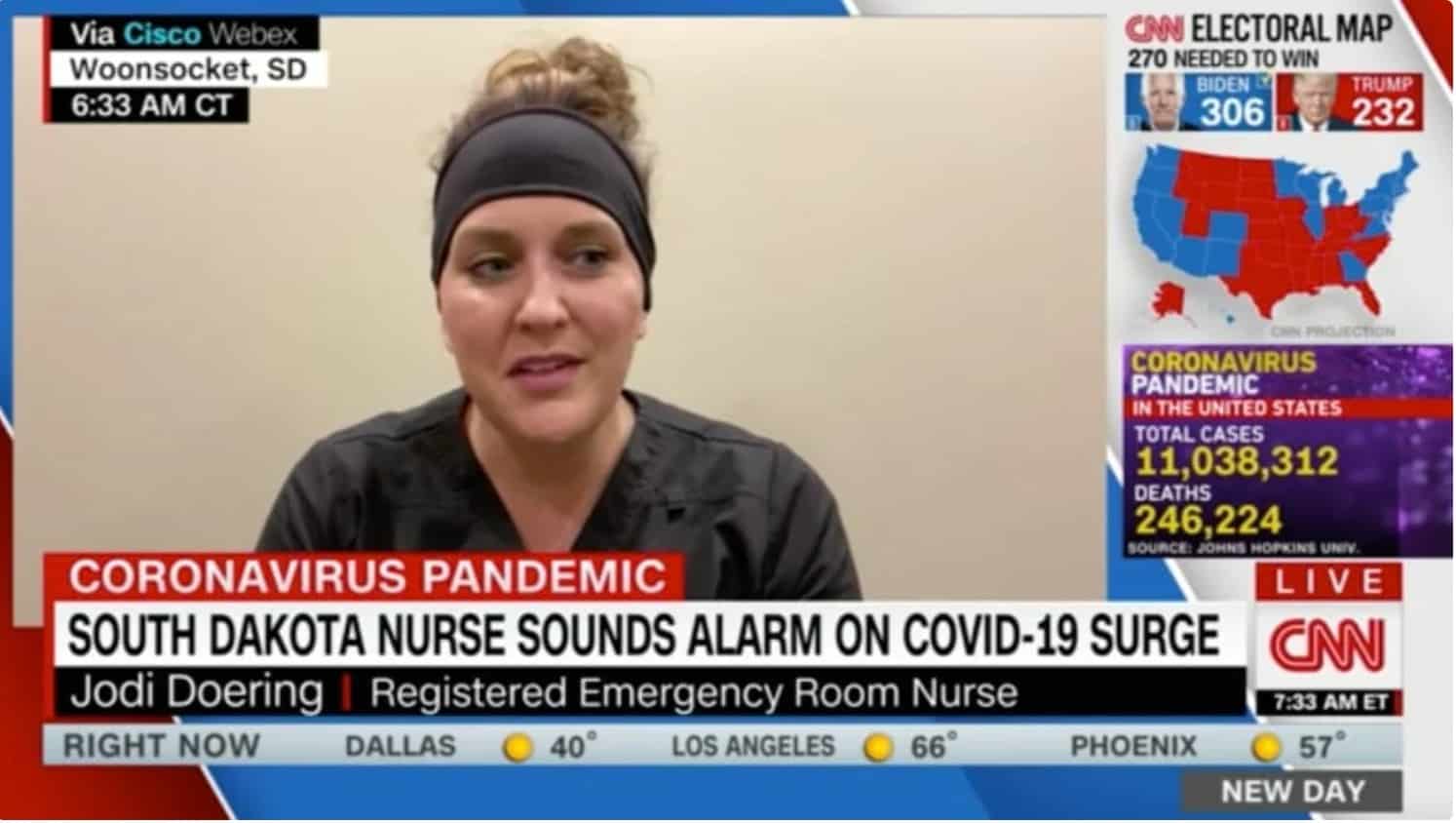 Daily Beast: A South Dakota nurse whose tweets went viral over the weekend says the hardest part of her job is convincing some critically ill patients that they really do have COVID-19. “Their last dying words are, ‘This can’t be happening, it’s not real,” Jodi Doering said on CNN. “Even after positive results come back, they don’t believe it.”

This is 100% the fault of Mark Zuckerberg. Because of Facebook, people actually believe Covid is fake even when they end up dying from it. @Facebook can stop this , yet doesn’t. Please retweet https://t.co/i00nYfbapS

South Dakota is one of the nation’s worst coronavirus hot spots, but Gov. Kristi Noem has downplayed the threat of the virus and refused to put a mask mandate in place.

A vaccine is our great hope for the coming months.

The Labour Party will work with the government on a cross-party basis to build trust and help promote the take-up of the vaccine.https://t.co/4FBmb3D0LT

Doering says some of her patients are also in denial, willing to believe almost anything else has made them so sick. “People want it to be influenza, they want it to be pneumonia, we’ve even had people say, ‘I think it could be lung cancer,’” she said.

The nurse said that when she offers to hook some patients up with family by FaceTime for a last conversation, they say, ‘No, because I’m doing fine.’” She said the attitude is taking a toll on health-care workers. ‘It’s like a movie where the credits never roll,” she said.

“Their last dying words are, ‘This can’t be happening, it’s not real,” Jodi Doering said on CNN. “Even after positive results come back, they don’t believe it.”https://t.co/zJhhewPsAD

New York Post: A traveling nurse on assignment in Texas described “horrific” conditions for patients with COVID-19 as hospitals reach max capacity amid a dramatic surge in local cases.

Among the most shocking claims made by registered nurse Lawanna Rivers about her time working at the University Medical Center in El Paso is the existence of a room she calls “The Pit,” where the worst COVID-positive patients were sent to die with minimal treatment and limited efforts at resuscitation.

Due to the sheer number of patients at the hospital, she and other nurses were instructed to give each person in “The Pit” just three rounds of CPR before the person was pronounced dead — a significant reduction to the normal efforts aimed at keeping patients alive.

“I saw a lot of people die that I felt like shouldn’t have died,” Rivers said in a nearly 50-minute Facebook Live video posted Nov. 7. “Out of all the codes that we had there, there’s not a single patient that made it.”

El Paso is among the worst-hit cities in Texas, which last week became the first state to record over a million cases of COVID-19.

As of Sunday, the city was fighting 32,687 active cases and had 762 recorded deaths — forcing officials to extend a municipal lockdown order and resort to using several morgue trucks to store bodies.

She also claimed to have witnessed preferential treatment for a doctor’s wife, who was the sole COVID-19 survivor on that floor.