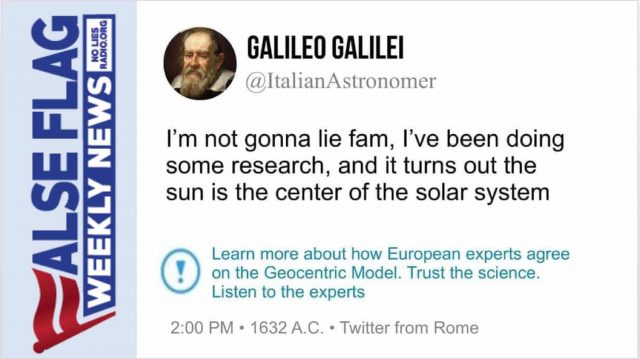 Watch FFWN above, click HERE for links to the stories we covered

The mainstream media (MSM) oligarchs say their version of reality is the only one. All other claims are “disputed by the experts” (the oligarchs and their hired propagandists).

Here at False Flag Weekly News we systematically dispute MSM claims—and find that a great many of them are false or dubious. For example, the MSM says COVID evolved naturally in animals and just happened to jump to humans, and that anyone claiming it looks like a bioweapon is a “conspiracy theorist.” Yet the evidence strongly supports the bioweapon interpretation. There is absolutely no evidence that COVID’s spike protein, an elaborately sculpted key perfectly tailored to unlock the human cell and get inside, could possibly have evolved in animals. Nor is there any evidence that it did so. COVID clearly “evolved” in human cells. And the only way that could have happened is by “accelerated evolution” in human cell cultures in a lab.

Yet the go-to “not a bioweapon” statements don’t even bother to try to refute this, the most plausible hypothesis. Instead, they refute a ridiculous straw man argument (COVID would have been made in an easily-detectable way). OF COURSE it wouldn’t have! OF COURSE it was made undetectably through accelerated evolution in countless generations of human cell cultures! How stupid do these propagandists think we are?

And who exactly are these propagandists, anyway? Skilled liars and conspirators, it turns out, and perhaps war criminals: The Cuban government blames the lead author of the Lancet disinfo article for murdering hundreds of Cuban children in a US biowar attack.

The MSM is also lying about almost every other important issue: Zionism, the Forever Wars, election fraud, censorship, the Great Reset, vaccines, and of course  “Jeffrey Epstein didn’t kill himself.”

Watch FFWN and stay one step ahead of the MSM hucksters!