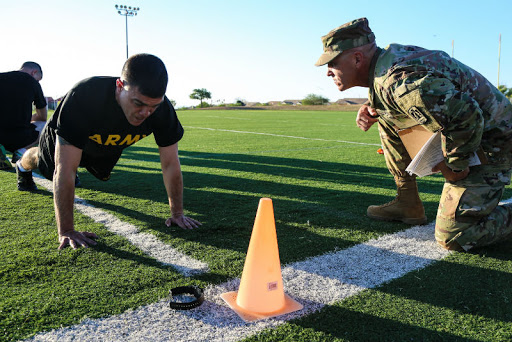 Being a soldier in the army is not an easy thing. It is one of the most dangerous, difficult and strenuous jobs in the world, and the wellbeing of each individual is something of the utmost importance. There are many ways in which the health of all soldiers is monitored and regulated, and there are various programs which have been developed to help with preparing each soldier to operate at their peak.

One of these programs is the Army Body Composition Program (ABCP). The main aim of the program is to make sure that all members of the Army, National Guard and also the Army reserves, can achieve and maintain their wellbeing and ability to perform under all types of conditions.

A look at the history of the ABCP

There have been various methods being used to monitor and look after the wellbeing of all individuals in the military, and the “The Army Body Composition Program” is the current version and the updated name of the AR 600-9 program, which was previously known as  “The Army Weight Control Program”.

The primary aim in the military for their physical standards programs have always been related to selecting the best type of individual who is best suited to the demanding physical aspects of military training and active service.

The ratio of height and weight was the most important factor used over the past century when it came to judging an individual’s fitness. At the time these standards between a recruits height and weight were relevant when it came to the fact that a large percentage of volunteers were individuals that were clearly malnourished, or who may have been suffering from some form of parasitic disease or who had tuberculosis.  Those that were underweight were clearly seen as undesirable for the military as the demands would simply be too much for them.

However, over time as the importance placed on these diseases diminished, so too did the need to continue using the weight and height standards as a metric for suitable recruits. The combination of better nutrition and huge medical advances in health care meant that many of these factors were eliminated.

During the 1900s there were huge advances made in the world of health and medicine, with a much better understanding of various medical conditions, as well as how best to treat and prevent them. The result of this also saw a gradual increase in the height and weight of recruits, thus creating an individual in much better physical condition.

One other import aspect became aware with the improvement of nutrition. The emergence of other health risks became more apparent with regards to an individual’s body size, with overnutrition being of concern. This can be explained by the fact that during the early part of the 1900s, one of the leading causes of death was tuberculosis, while just 90 years later, the leading cause was heart disease. This led to a switch of focus from underweight soldiers to overweight and obese ones.

What is important to note is that the use of these standards has shifted in that they are no longer used only for the initial entry criteria in selecting only the fittest and healthiest recruits, but for them being maintained throughout their entire career in the army, through a program of continued nutrition and physical exercise.

First published in September 1986, the primary objective of the Army Weight Control Program was to make sure that each individual would be able to adhere to the physical demands of duty under combat conditions. They were also to maintain a slim military appearance all the time., which is something that could be done with an army tape test calculator.

In the Army Regulation 600-9, excessive body fat was said to show a lack of personal discipline and may be an indication of poor physical health, stamina or fitness. It was also quoted as saying excess fat was a detraction from the expected military appearance.

There were a number of objectives of the Army Weight Control Program, such as helping to establish, and maintain, disciple, top physical fitness, weight control, general health and operational readiness, which was vital as a soldier could be called into active duty at any given moment, so they were always expected to be ready.

The program also wanted to establish a number of standards on body fat, in addition to providing a set of procedures to help recruits and individuals meet the necessary standards of the program through organized counselling. Emphasis was also placed on all personal maintaining the high standards for military appearance at all times.

At 6 month intervals, all soldiers are weighed to make sure that they are below the height and weight limits that were previously established. These limits are divided by gender, as well as having four different age categories, which is important as the results of soldiers in their early 20s will not be the same as those in their early 50s.

If any soldiers are found to exceed the fat standards, then they are entered into the U.S. Army Weight Control Program, which was designed to help motivate soldiers, better educate them on nutritional matter and promote effective fitness and exercise programs, developed for that specific individual. Remember, each soldier is different, and exercise programs need to be catered to the individual for a greater effect.

Additional motivation to the individual is provided by their military records being flagged, in order to prevent favorable actions including military awards, assignment to positions of command and other such rewards.

There is the possibility for a soldier to be discharged from the Army if they fail to achieve the required weight loss during their time in the Weight Control Program. The expected amount of weight loss is between 3-8 pounds during a period of 2 consecutive months. Before this happens though, a thorough medical evaluation is carried out to make sure that the weight problems of the individual are not the result of an underlying illness or medical condition.