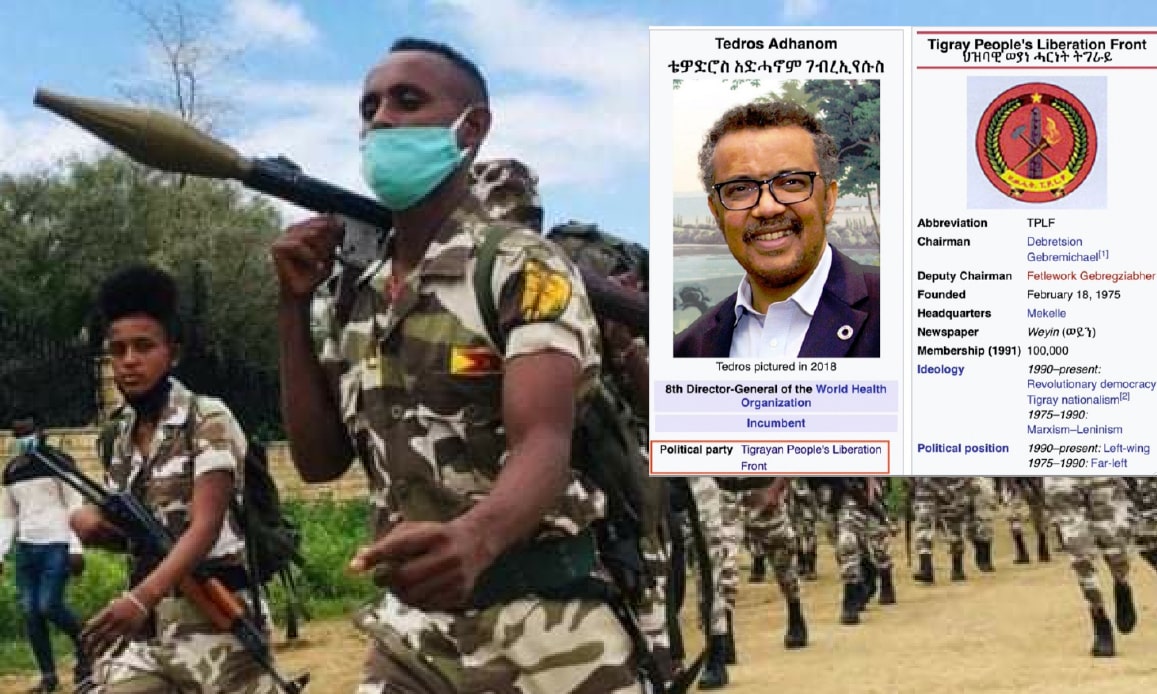 In recent days we have drawn the profile of the most embarrassing director of the World Health Organization, both for his past as a charismatic leader in a far-left political-paramilitary formation in his African country, and for his inability or knowing will – suspicion is a must at this point – in managing the pandemic.

But in the last few hours Tedros Adhanom Ghebreyesus, communist like the TPLF party (Tygray Pepople’s Liberation Front that made him minister in Ethiopia from 2005 to 2016 (first for Health and then for Foreign Affairs), was openly accused of being a criminal by some authorities of his own nation, because he would have tried to diplomatically and militarily facilitate, with help in obtaining weapons, the very nationalist rebels of Tigray who have reopened a bloody conflict with the federal government of Addis Ababa.

This has already created a devastating humanitarian crisis that has already caused an unspecified number of civilian deaths (estimated at least a thousand) and more than 30,000 displaced people who fled Ethiopia to Sudan.

In 2018, a popular uprising overthrew the national government that the Ethiopian ethnic minority of Tigré, strong of roots in other neighboring African countries such as Eritrea, had held since 1991. On April 2, 2018 Abiy Ahmed Ali, a former military man, came to power son of a Muslim father and Orthodox Christian mother, as Prime Minister of Ethiopia who in 2019 was awarded the Nobel Peace Prize for having reached an armistice with Eritrea but perhaps also for having managed a transition without a bloody conflict despite being of Oromo ethnic group, one of the majority in the country.

“First, the new leader denounced previous governments of corruption and human rights violations and “renewed” ministries and government offices. In fact, he freed himself by removing many members of the Tplf from their positions, which for decades was the dominant political party. Then, in 2019, Abiy decided to merge the ethnic-based parties of the EPRDF government coalition into a single party, the Prosperity Party – wrote Anna Bono in La Nuova Bussola – The TPLF opposed the reform, which it considers a maneuver. to dismantle the country’s federal structure, claiming it would divide the country and refused to join the PP. Even the peace signed with Eritrea, which deserved the Nobel Prize in Abiy, was seen as an offense by the leaders of the TPLF because Tigray has a long dispute with the Eritrean government “.

But tensions escalated in September when the government decided to postpone the elections with the excuse of the Covid-19 emergency while the Tigray region decided to address the same, decreeing the overwhelming success, bordering on suspicion, of the TPLF with the 98% and the conquest of 152 seats out of 190.

Ahmed, however, declared them illegal by setting new national and regional elections for 2021. At that point the first bloody events began, however, already announced in August by a meeting of the paramilitary forces of the Tigray in a stadium complete with a parade with kalshnikovs and bazookas.

On November 4, Prime Minister Abiy accused the Tplf of attacking and occupying a military base of the federal troops in Macalle, the capital of the region, called the action, which the TPLF denied having committed, a treason and announced a military offensive, which resulted in the attacks of the aviation and armored divisions against the communist rebels, mainly islamist Sunni.

This escalated after the massacre of hundreds of civilians in the city of Mai-Kadra, Tigré, which Amnesty International attributed to the TPLF special police, which we reported in detail in the previous report on Tedros Adhanom Ghebreyesus, now openly accused of being a criminal, as reported by Reuters and the BBC (links in main sources at the end of article).

“Ethiopia’s military on Thursday accused the most prominent Tigrayan abroad, WHO head Tedros Adhanom Ghebreyesus, of trying to procure arms and diplomatic backing for the TPLF – wruites Reuters- Ethiopian army chief Birhanu Jula called Tedros, who served as a minister in a TPLF-led Ethiopian coalition government for more than a decade before taking the helm of the global health body, “a criminal”. Bihanu provided no evidence”.

In a Twitter message, Tedros denied the accusation and called on all parties in Ethiopia to work for peace, civilian safety and access for health and humanitarian assistance to those in need. Tedros said: “There have been reports suggesting that I am taking sides in this situation. This is not true and I mean that I am on one side and that is the part of peace “.

But as reported by Gospa News in the previous report, still in 2015, a year before leaving his position as Minister of Foreign Affairs and in the run-up to his appointment to the WHO supported by Bill Gates, the main financier of the organization, Dr. Adhanom had posted on FB an image of the 1967-2007 anniversary celebration of the TPLF as proof of a strong emotional involvement.

“We don’t expect him to stand on the side of Ethiopians and condemn these people. He has been doing everything to support them, he has campaigned for neighbouring countries to condemn the war,” said Gen Berhanu Jula.

Previously there had been rumors of excessive involvement of the WHO director in the conflict that could cross national borders and destabilize the entire Horn of Africa with the risk of favoring a resurgence of Islamic Al Qaeda terrorists, particularly strong in Somalia thanks to the Al Shabaab cell, and the rebirth of the almost defeated ISIS.

This is happening just as the West is facing a major scandal linked to the jihadists. In fact, in London and Florida, Syrian refugees and an American reporter kidnapped in Syria sued two Qatari banks accusing them of having financed the Qaedist terrorists of Al Nusra. The judicial proceedings are hot because they risk revealing the long-standing and close relations between the wealthy emirate of Doha and the friends of the United Kingdom, Italy and the United States.

As reported by InsideOver, according to the Anadolu news agency, which cited an Ethiopian official as a source, Ghebreyesus is fully committed to seeking diplomatic support for the regional authorities of Tigray.

“The WHO leader would have asked the United Nations agencies in particular – reads the Turkish agency – to exert pressure on the Ethiopian government to unconditionally stop its military action against the Tplf and would also have solicited Egypt’s military support for in favor of the TPLF, as well as contacting “repeatedly”, but without success, senior officials from neighboring countries in East Africa to provide diplomatic and military support to Tigers”. (read more)

REUTERS – ETHIOPIA WAR AND ALLEGATIONS TO WHO BOSS

INSIDE OVER – ANADOLU ACCUSA DR. TEDROS