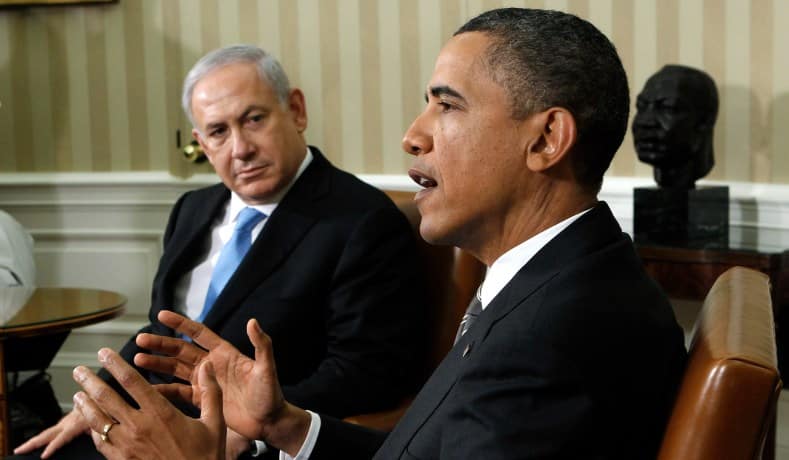 I’ve got to give Obama credit again for unflinchingly describing how he clashed with Netanyahu in the final chapter of his new book, A Promised Land. One can say that Obama was the first president ever to say that Benjamin Netanyahu is essentially living in a dream world. Even the Boston Herald seems to recognize this. Comparing Obama to Trump with respect to the Middle East, the Boston Herald declared last September:

“Ten years ago, Israeli Prime Minister Benjamin Netanyahu was hustled out of the back door of the White House after he was dissed by President Barack Obama. Last week President Trump welcomed him as a hero…

“The old Obama insult of Netanyahu came when Obama, never a friend of Israel, abruptly walked out of a tense March 2010 meeting over Israeli expanded construction in Jerusalem. Obama, who opposed the construction, left the gathering mid-meeting. ‘I’m going to the residential wing to have dinner with Michelle and the girls,’ Obama said, walking out.”[1]

In A Promised Land, Obama made it very clear that Netanyahu’s own father was hostile toward Arabs. In fact, Netanyahu’s father viewed the Arabs as Israel’s enemies. Obama quotes Netanyahu’s father saying, “The tendency towards conflict is in the essence of the Arab. He is an enemy by essence. His personality won’t allow him any compromise or agreement.”[2]

So, Obama had every good reason to oppose the Israeli settlements. One can say that he saw the settlements as a form of colonial enterprise. But because he did not agree with Netanyahu’s move, the Israelis felt that they were humiliated when Obama told them that the line has been drawn on the sand.

Throughout his administration, it is pretty clear that Obama had to have his political baseball bat with him whenever he met Netanyahu because he knew that the man is obviously a lunatic, or, as his administration put it then, a “chickenshit”—though Netanyahu can display a “charming” persona. Obama writes:

“Netanyahu could be charming, or at least solicitous, when it served his purposes. He’d gone out of his way, for example, to meet me in a Chicago airport lounge shortly after I’d been elected to the U.S. Senate, lavishing praise on me for an inconsequential pro-Israel bill I’d supported in the Illinois state legislature. But his vision of himself as the chief defender of the Jewish people against calamity allowed him to justify almost anything that would keep him in power—and his familiarity with American politics and media gave him confidence that he could resist whatever pressure a Democratic administration like mine might try to apply.”[3]

Obama continues to say that Netanyahu immediately wanted to talk to him about Iran, which Netanyahu views “as Israel’s largest security threat…” But Obama, to Netanyahu’s dismay, did the opposite of what Netanyahu wanted with respect to Iran. Obama talked to the fine folks in Iran and stroke a reasonable deal with them. Netanyahu was looking for a war, but Obama didn’t deliver.

Of course, Netanyahu was mad, sad, and wanted to be bad because he wanted to create conflict and bloodshed when decent people are talking about peace. Listen to Obama here: “But when I raised the possibility of restarting peace talks with the Palestinians, he [Netanyahu] was decidedly noncommittal.”[4]

The plot thickens. What is the opposite of peace? Well, it’s war, conflict, animosity, feud, tension, bloodshed, enmity, hostility, factionalism, etc. Netanyahu was asking Obama to drop peace talks and embrace bloodshed with Iran in particular and much of the Middle East in general.

Obama’s first move was that both the Palestinians and the Israeli government need to start talking about peace talks. In order to do that, he asked Netanyahu to freeze the settlements. Netanyahu again went berserk. “As expected, Netanyahu’s initial response to our proposed settlement freeze was sharply negative, and his allies in Washington were soon publicly accusing us of weakening the U.S.-Israeli alliance. The White House phones started ringing off the hook, as members of my national security team fielded calls from reporters, leaders of American Jewish organizations, prominent supporters, and members of Congress, all wondering why we were picking on Israel and focusing on settlements when everyone knew that Palestinian violence was the main impediment to peace.”[5]

That was in 2009. Obama had to call in Jewish organizations and members of Congress coaxing them that his commitment to Israel’s security was skin deep, and that he was simply advancing a peace deal. Still, Netanyahu would have none of it. “The noise orchestrated by Netanyahu had the intended effect of gobbling up our time, putting us on the defensive, and reminding me that normal policy differences with an Israeli prime minister—even one who presided over a fragile coalition government—exacted a domestic political cost that simply didn’t exist when I dealt with the United Kingdom, Germany, France, Japan, Canada, or any of our other closest allies.”[6]

Got that? Obama nailed it here. He is essentially saying that Benjamin Netanyahu has caused more problems than any other major country that he has dealt with in the past! But it seems that Obama was not like the typical American president who would kowtow to Bibi’s every diabolical, irrational, and just plain stupid demand. “And after months of wrangling,” Obama writes, “he and Abbas finally agreed to join me for a face-to-face discussion while they were both in town for the annual leaders’ gathering at the U.N. General Assembly at the end of September” of 2009.[7]

We all know by then that Netanyahu was trying to save face because, as Obama puts it, “Any optimism I felt about Bibi’s concession was short-lived.” Why? Netanyahu did agree to freeze the settlements, but he picked up where he left off ten months later. What was his reason? “He insisted that in the absence of a total freeze, he would not join any talks.”[8] As Joe Biden was about to visit Israel in 2010 “on a goodwill mission,” the Israeli Interior Ministry declared that they will reinstate permits for the constructions of thousands of “new housing units in East Jerusalem,”[9] a spit in the face of the Obama administration.

Obama immediately asked Hillary Clinton to pick up the phone and call Netanyahu to say that he was really upset about the stupid move. Netanyahu’s response? The joker went to AIPAC and delivered a sermon to his brethren in which he declared that “Jerusalem is not a settlement—it is our capital.”[10]

The very next day, Obama, obviously still upset, met with the diabolical character in order to discuss what the heck had just happened. “Downplaying the growing tension,” writes Obama, “I accepted the fiction that the permit announcement had been just a misunderstanding…”[11]

In other words, for the sake of the meeting, Obama accepted Netanyahu’s categorical lie that Netanyahu had nothing to do with the permit announcement. Even then, Netanyahu, like Satan in Milton’s Paradise Lost who said “evil be though my good,” did not even pay attention to what Obama was saying about peace. “What I do know is that despite the hours Hillary and George Mitchell spent doing shuttle diplomacy, our plans for peace talks went nowhere until late in August 2010, just one month before the settlement freeze was set to expire…”[12]

Obama declared that he was even willing to release Jonathan Pollard in order to strike a serious peace deal with the Israelis, “but it was all to no avail. The Israelis refused to extend the settlement freeze.”[13] Obama’s assessments here are quite fair and balanced, but Jim Geraghty of National Review, which is now a bastion of Neocon or Israeli propaganda machine, declared that Obama “was not a stalwart or reliable ally of the Jewish state.”[14]

Why does the Neocon flagship lambast Obama? Is it because he bailed out the banksters after the economy crashed? No. National Review wants to put Obama’s feet on iron spikes because he told something that every single thinking person knows is true. Here’s what Obama said:

“Members of both parties worried about crossing the American Israel Public Affairs Committee (AIPAC), a powerful bipartisan lobbying organization dedicated to ensuring unwavering U.S. support for Israel. AIPAC’s clout could be brought to bear on virtually every congressional district in the country, and just about every politician in Washington — including me — counted AIPAC members among their key supporters and donors.

“In the past, the organization had accommodated a spectrum of views on Middle East peace, insisting mainly that those seeking its endorsement support a continuation of U.S. aid to Israel and oppose efforts to isolate or condemn Israel via the U.N. and other international bodies.

“But as Israeli politics had moved to the right, so had AIPAC’s policy positions. Its staff and leaders increasingly argued that there should be ‘no daylight’ between the U.S. and Israeli governments, even when Israel took actions that were contrary to U.S. policy. Those who criticized Israeli policy too loudly risked being tagged as ‘anti-Israel’ (and possibly anti-Semitic) and confronted with a well-funded opponent in the next election.”[15]

Isn’t that true? You see, Jim Geraghty didn’t dispute the claim because that would put him in a hot seat. In fact, virtually every serious scholar of the Israel/Palestine conflict has been saying pretty much the same thing.[16] But Geraghty has to summon deceptions and use these tropes because that is the only way he can make a stupid point. What he doesn’t seem to want his readers to know is that Israel has been a problem child in the Middle East since the beginning of time, and that Obama was the first president to publicly challenge the mad man in Tel Aviv. In fact, the New York Times itself suggested that throughout his administration during his eight years, Obama had “clawing conflict” with Netanyahu.[17]

Two cheers for Obama for sticking it to Benjamin Netanyahu.