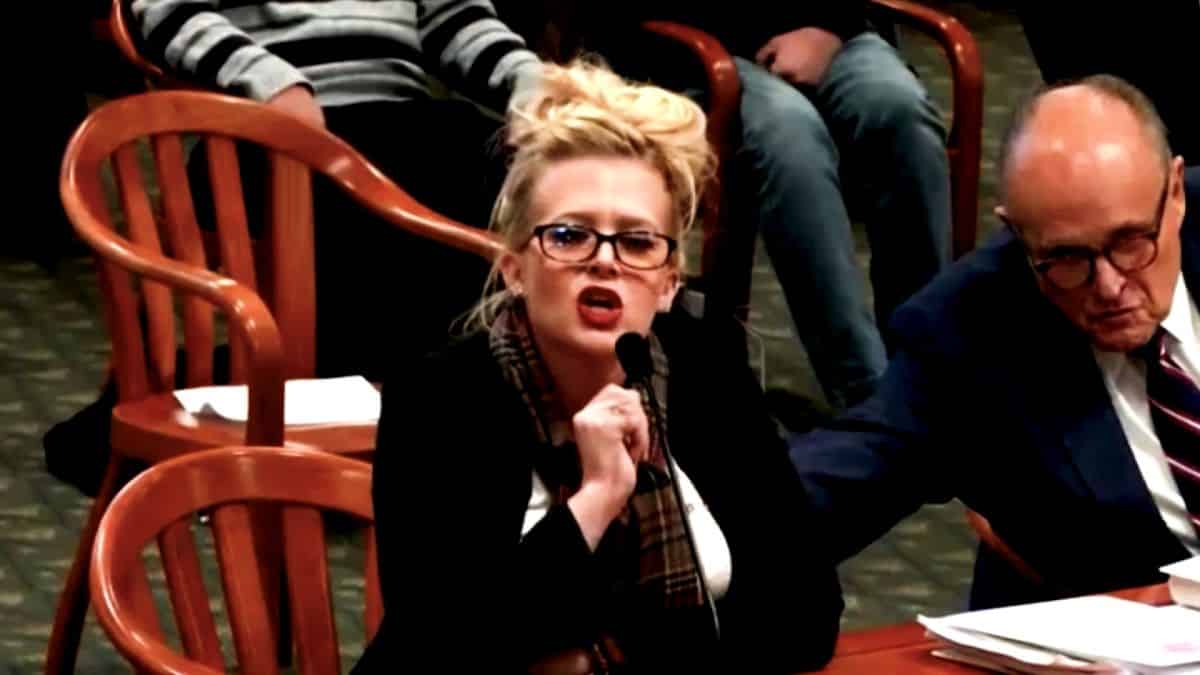 Daily Beast: Melissa Carone, a witness in one of Rudy Giuliani’s sham election fraud hearings who went viral for her bizarre testimony, only recently came off probation for stalking her boyfriend’s ex-wife with sex videos.

Carone, a mother of two originally from downriver, told police she was working toward her degree in cybersecurity when she was charged. She received an information technology certificate from ITT Technological Institute in 2015.

Melissa Carone, a witness in one of Rudy Giuliani’s sham election fraud hearings who went viral for her bizarre testimony, only recently came off probation for stalking her boyfriend’s ex-wife with sex videos https://t.co/HFi4hPIBoB

According to police reports obtained by Deadline Detroit, Carone harassed the woman for two years, sending her several explicit videos of Carone and her new boyfriend having sex.

This is allegedly what Rudy's Key witness, Melissa Carone did to get convicted of a computer crime. From what I read, she tried to frame her bf's ex of hacking into her email & stealing her sex tape. But the investigation showed Melissa is the one who emailed the tapes to the ex https://t.co/huRbUceXmy

Investigators linked an email address used to send the videos back to Carone, who eventually admitted to sending them and saying she wanted to send the ex-wife “over the top.” She faced obscenity and computer crime charges that were later reduced to a misdemeanor disorderly conduct.

This is the typical republican woman at every bar in America by 6pm. https://t.co/96ZdCk1Z0C

Carone finished serving one year of probation just before she was contracted by Dominion Voting Systems to do IT work at a Detroit ballot-counting center, where she claimed she witnessed rampant fraud. Her slurred speech and ridiculous accusations in Giuliani’s hearing were widely mocked, and a county judge called her testimony not credible.

Two years before she’d become the breakout star of the clown show Rudy Giuliani brought to Lansing this week, Mellissa Carone was sending her then-boyfriend’s ex-wife graphic videos of the two of them having sex.

Police reports obtained by Deadline Detroit reveal obscenity and computer crime charges filed against the 33-year-old Grosse Pointe Woods mother stem from a harassment campaign she waged against a 42-year-old woman in 2018 and 2019. Earlier Friday, the Wayne County Prosecutor’s Office said Carone pleaded the initial charges down to disorderly conduct, a misdemeanor.

Her boyfriend’s ex-wife, Jessica, called Southgate police about Carone multiple times between November 2018 and September 2019, initially after receiving three videos from an unknown email address showing Carone and her ex having sex. Carone’s last name was then Wright.

Police traced the IP address from the emails to Carone, who initially denied sending them but revealed she was aware of their content. Eventually, she confessed to investigators, saying her goal was to send Jessica “over the top.” She admitted to also asking her boyfriend to cover her tracks by getting a new router and internet provider.