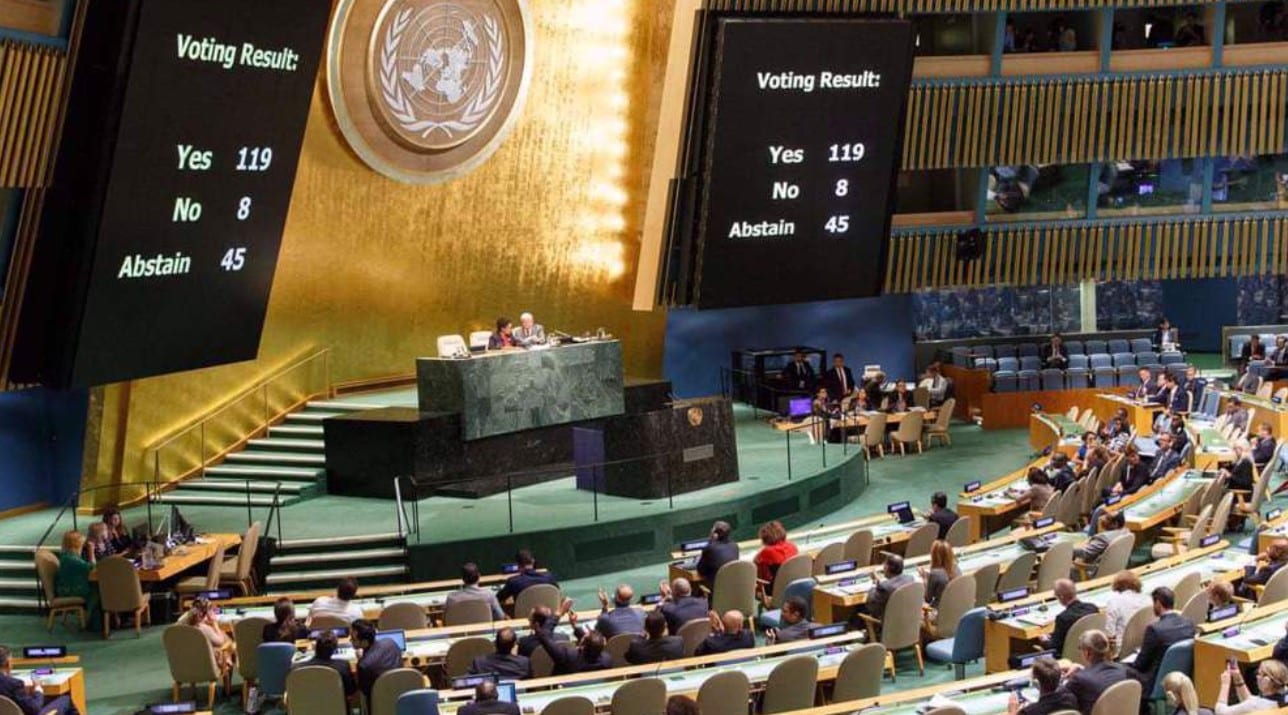 The United Nations General Assembly (UNGA) has approved five anti-Israeli resolutions, which are part of a package of 20 pro-Palestinian texts that the 193-member body adopts on an annual basis.

One of the documents, passed on Wednesday, condemned Israeli sovereignty over the occupied Golan Heights — a territory the Tel Aviv regime seized from Syria in the 1967 Six Day War and annexed four years later — in a move that was never recognized by the world community.

Endorsed by 88-9 votes with 62 abstentions, the resolution urges Israel to withdraw from the “occupied Syrian Golan to the line of 4 June 1967 in implementation of the relevant Security Council resolutions.”

It also affirmed that Israel’s unilateral annexation of the Syrian territory in 1981 “constitutes a stumbling block in the way of achieving a just, comprehensive and lasting peace in the region.”

Over the past decades, Israel has built dozens of settlements in the Golan Heights in defiance of international calls for the regime to stop its construction activities on the occupied land.

Damascus has repeatedly reaffirmed its sovereignty over the Golan Heights, saying the area must be completely restored to its control.

In a major pro-Israel policy shift, US President Donald Trump signed an executive order in 2019 recognizing Israel’s control over occupied Golan in a blatant violation of international law.

The second resolution, entitled a “Peaceful Settlement of the Question of Palestine,” was approved 145-7, with nine abstentions.

It called on the Tel Aviv regime to withdraw from all territory over the pre-1967 lines in occupied East Jerusalem al-Quds, the West Bank and the Golan Heights.

The document also demanded a halt to Israel’s settlement construction activities, spoke of the illegality of annexation plans, and warned the occupying entity against making changes in East Jerusalem al-Quds.

It further took Israel to task for a wide range of actions against the Palestinian people, including the demolition of their homes in Area C of the West Bank.

The three remaining UNGA resolutions affirmed the work of UN Committees operating on behalf of the Palestinians.

Before the vote, Israel’s Ambassador to the UN Gilad Erdan chastised the General Assembly for not referencing the regime’s recent normalization deals with the United Arab Emirates (UAE) and Bahrain.

“Can this forum be any more detached from the real world?” he asked, claiming, “Instead of encouraging the Palestinians to see how these agreements can transform the region and be used as a catalyst for peace with Israel, this institution votes in favor of these biased resolutions.”

Palestinians in the Gaza Strip stage a demonstration in protest at Bahrain’s move to normalize relations with Israel.

A Palestinian representative denounced Erdan’s “flip” and “offensive” comments, including one where he accused the UNGA of being detached from reality.

“On the contrary, what was discussed today in this debate is the reality. What was discussed today is not so-called ‘Palestinian talking points.’ These are the international talking points,” she said. “This is the international consensus that Israel, the occupying power, continues to object, obstruct, to deny, to belittle and to attempt futilely to destroy.”

The regime has gotten “accustomed to violating the law with zero consequences,” she added. “Only accountability can change this miserable situation and give hope for a future of justice and peace…The hypocritical and degrading claim by the Israeli representative that this institution’s approach has failed perhaps should highlight even more the need or concrete actions by states to implement the resolutions adopted by the UNGA to ensure accountability.”

She also stressed that the passage of the anti-Israel texts showed that support for the Palestinian people remained strong.

Before the General Assembly’s vote, a Jordanian representative, whose country is the custodian of the holy sites in Jerusalem al-Quds, said Israel must maintain the status quo at Haram al-Sharif or Temple Mount.

Israel is attempting to “impose a fait accompli on al-Aqsa mosque and Jerusalem,” he said, adding that the occupied city’s “holy sites will remain the focus of Jordanian care and guardianship.”

Jordan will “combat a new fait accompli or change the historic or legal status of the holy city especially at the al-Aqsa Mosque,” he emphasized.

Separately, Palestinian Ambassador to the UN Riyad Mansour asked the international community to hold Israel accountable for its violations of international law and stick to the so-called two-state solution to the Middle East conflict.

He also called for a boycott of Israeli settlement products and urged Western nations to recognize Palestinian statehood.

He stressed that the status quo imposed by Israel is deteriorating as the Palestinian land is shrinking, the settlers’ violence is escalating, and access to resources is decreasing daily.

“Economic development is not separate from the political and national project. Rather, it is a lever towards ending the occupation and establishing the Palestinian state with Jerusalem as its capital,” he said, noting that the world must move to end this occupation because the current status quo cannot continue.

Mohammad Reza Sahraei, counselor at Iran’s Mission to the UN, said the International Day of Solidarity with the Palestinian People provides an opportunity to “highlight the dire and painful situation endured by Palestinians over the course of decades as a result of the gross and systematic violation of their rights by the Israeli regime.”

“The question of Palestine is the longest-running crisis of our time with no foreseeable conclusion in sight…. In fact, the non-compliance of the occupying regime with relevant international laws and regulations has further prevented the international community from achieving a just and lasting solution to the crisis,” he said.

“After more than seven decades, the Israeli regime has continued to violate the fundamental human rights and dignities of the Palestinian people as well as other Arabs living under its occupation. As a result, Palestinians are not only deprived of their lands and properties while being forcibly evicted but also subjected to violence, terror, and intimidation,” the diplomat added.