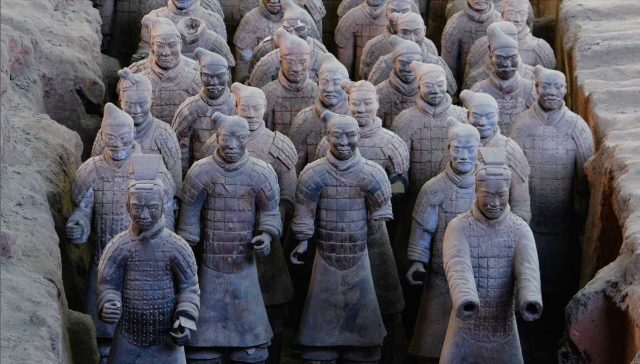 [ Editor’s Note: The race to be the first to have a working quantum computer has been heating up with Google in the lead this past year. This claim from China comes as a surprise, as while the other competitors have made progress, all I have read until today is that they had no way to predict when they would have a commercial operating system.

China has made a breakthrough in quantum computing technology. The science is based on using photons of light and a complex array of lasers, prisms and mirrors, so you have computations moving at the speed of light under controlled conditions.

How fast is China’s new scientific race horse? This photonic computer performed in 200 seconds a calculation that on an ordinary supercomputer would take 2.5 billion years to complete. We can’t wait that long to find out with supercomputers, because in 2.5 billion years, Earth will have undergone quite a few asteroid hits and climate changes.

From Scientific American we have:

“Jiŭzhāng begins with a laser that is split so it strikes 25 crystals made of potassium titanyl phosphate. After each crystal is hit, it reliably spits out two photons in opposite directions. The photons are then sent through 100 inputs, where they race through a track made of 300 prisms and 75 mirrors.

Finally, the photons land in 100 slots where they are detected. Averaging over 200 seconds of runs, the USTC group detected about 43 photons per run. But in one run, they observed 76 photons—more than enough to justify their quantum primacy claim.”

The other international competitors will have to abandon or adjust their works in progress. Actually, China has helped them all, because the University of Science and Technology of China in Hefei has proven their model works.

The others now have to try to reproduce the effort or join hands to do so if they don’t want to be left behind. Whoever gets to a commercially working system will leave others behind in technology research, especially anything that requires experimental simulation sequencing.

Such a computer could literally manufacture new technologies in an array of fields. But sadly, because of the advantage it could give a well heeled state in military technology, quantum computing will also be deemed a threat.

We are living in exciting science times. Those of us who are 70 now, half of us are predicted to still be around at 85. The lucky ones will get to see development only dreamed of, and one of the things on the list is life extension.

Who knows, maybe the early quantum computers will be able to use some of that muscle to make major health breakthroughs in science to extend productive lifestyles… Jim W. Dean ]

Chinese scientists say they have developed the world’s fastest quantum computer, capable of performing calculations that a regular computer would take billions of years to solve.

The leading quantum research group published its findings about the quantum computer in the journal Science on Thursday.

Chief professor behind the study, Lu Chaoyang, said the team achieved the breakthrough by manipulating photons, particles of light.

The breakthrough represents a quantum computational advantage, also known as quantum supremacy, in which no traditional computer can perform the same task in a reasonable amount of time and is unlikely to be overturned by algorithmic or hardware improvements, according to the research.

It also said the prototype was 100 trillion times faster than Japan’s Fukagu supercomputer, launched in June.

Last year, Google announced that it had built a computer capable of performing a computation in 200 seconds that would take the fastest supercomputers 10,000 years.

Chinese scientist said that their computer is 10 billion times faster than Google’s Sycamore machine. No quantum computer is yet ready to do useful work in the world.

The Asian power, which is in a technological race with the US to achieve quantum supremacy, is building a $10 billion National Laboratory for Quantum Information Sciences.