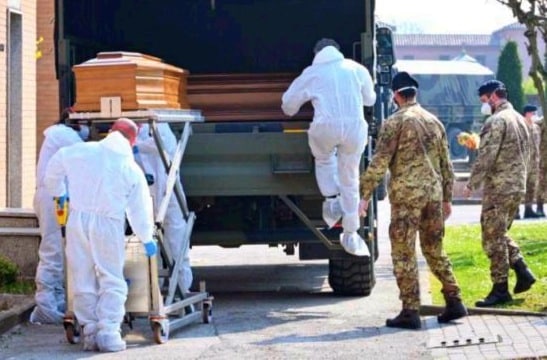 In reason of the numerous investigations on the SARS virus-2 but also on the chaotic therapies against the COVID-19 where we are working, we are forced to republish without working on this great article of inquiry published in the Italian newspaper Il Giornale, always very punctual on the flaws committed by the Government in the management of the pandemic, created by colleagues, Giuseppe De Lorenzo and Andrea Indini.

Inside of it we have inserted our previous news report about the cremation of the top-secret guarded by the military last spring, the care ignored of cortisone, the psychological terrorism, unjustified, this fall and about how much it has contributed to create the phenomenon pandemist like a real conspiracy of the media-political climate in which the fight against Fake-News is one of the responsibilities of multinational corporations and financial as EY – Ernst&Young, finished in the eye of the storm in Germany because of the scandal billionaire Wirecard of which certified the financial statements without notice for years of a hole of 1.9 billion euro, guaranteed by certificates banking false.

Because the government forbade the autopsies, and the pads on the dead? Because he invited the judges and health management, to do the same? The yellow of the circular of the minister of Speranza

The Minister of Health Roberto Speranza

Is on the circular 11285 of the ministry of Health, weighs one of the more disturbing points of the respondents that the government still did not want to unravel. It was issued last April (in the midst of the “phase 1”, thus) and gives provisions on the sector of funeral, cemetery and cremation services. To in paragraph “c”, however, also addresses the subject of examinations, autopsy and the findings are agnostics (read here the Italian paper).

And so states: “For the entire period of the phase-emergency you should proceed to the execution of autopsies or findings are diagnostic in cases of acclaimed Covid-19, both died in the course of hospitalization at a department of a hospital or if the deceased’s domicile”. Not only. The court “grants”, in a short-circuit constitutional, the right to “limit the assessment to only the external inspection of the corpse”. How was it possible that in Italy, in the twenty-first second, the case that a group of doctors, legal and not too many problems in defining the “lockdown of the science”?

The coffins of the alleged deaths of Covid-19-course meal in the crematorium ovens of Bergamo under the surveillance forces of the Italian Army, and without the previous autopsies to confirm the causes of death.

The importance of autopsies

“The lack of investigation of post-mortem – according to an article published at the end of may in the Journal of clinical medicine – has not allowed a definition of the exact cause of death, useful for determining the locations of this infection”. Not all bend to the diktat of the ministry of Health. At the hospital, Pope John XXII, for example, as reconstructed in the black Book of coronavirus, the director of the department of laboratory Medicine and anatomical pathology, Andrea Gianatti, decides to do his own thing. And, together with Aurelio Sonzogni, gets to do autopsies already from the 23rd of march. “It was clear soon enough that this disease was manifesting in the form of different, multiple”. To understand the behavior of the virus was still some piece.

The need to understand leads him to break the rules and discover the utility of heparin against deep vein thrombosis. “The idea of intervening on the coagulation at the empirical level – reveals QN Gianatti – started after seeing the picture of thromboembolism, and use of cortisone, in turn, vascular inflammatory”. When, however, the clinical evidence, supported by examinations of autopsy, begins to show that the sick people die “not so much for lung failure severe, how much for pulmonary embolism, massive, or other serious phenomena thrombus-embolic”, it is too late. The deaths are already thousands, and the shock wave of the pandemic hit relentlessly on Italy.

The doubts on the circular

Although the government has been repeatedly rinfacciata the neverending series of mistakes made during the “phase 1”, the minister of Health Roberto Speranza he never motivated the content of the circular 11285. Now, however, the lawyer Giancarlo Onion is trying to clarify the delays and omissions in the struggle of the executive to the coronavirus. On the 5th of November last the general prosecutor’s office of Brescia gave itself the investigation that in the months previous he was, however, already been filed by the judges of Cremona. The alleged crime (for now, against unknown persons), ranging from epidemic negligent manslaughter and negligent injury, up to then, the abuse of office, and omission of acts of office.

In the exposed of the office, who assists Joan Muscetti, a milan manager, you also mention the prohibition to perform autopsies on the corpses of the victims of the Covid-19 and the prohibition to perform the swab oropharyngeal to confirm if the dead man had been infected or not. “By the opinions of the doctors cited in our brief – explains the Onion – the main problem of the deaths is not the virus, but the immune reaction that destroys the cells infected by the virus”.

Many patients, in fact, end up in intensive care for venous thromboembolism generalized, especially pulmonary, and therefore intubation is of little use if you do not prevent thromboembolism. “If you ventilate a lung where the blood does not arrive, you don’t need, ” explains professor Sandro Giannini clinic Rizzoli of Bologna – the problem is cardiovascular, non-respiratory. Are the microthrombosis also venous, not the pneumonia to determine the fatality”.

Breakpoints one and two of paragraph “c” of the circular number 11285 are intended to discourage tout court any analysis that could, instead, help science to progress in the knowledge of the Covid-19, and then in the study of an effective cure. At one point it says clearly that “for the entire period of the phase-emergency you should proceed to the execution of autopsies or findings are diagnostic in cases of acclaimed Covid-19, both died in the course of hospitalization at a department of a hospital or if the deceased’s domicile”.

If that’s not enough to point two, it gives the judicial authority the right to “assess, in their autonomy, the possibility of limiting the assessment to only the external inspection of the corpse in all cases in which the autopsy is not strictly required”.

Similarly, with regard to the Health Departments of each Region, it is said that they will be given “indications aimed at limiting the execution of diagnostic tests only to cases aimed at diagnosing the cause of death, limiting to the strictly necessary those to be performed for study and in-depth study “.

In this way the ministry inaugurates the season of concessions with dubious interpretation (as noted by many scholars) of the constitutional principles relating to the separation of powers (judicial, executive and legislative) and of the autonomy and independence of the judiciary. It is difficult to say whether the investigation by the Brescia prosecutor will lead to indictments and convictions. We’ll see. But the question remains: why in the 21st century prevent the autopsy examination? There must be an answer. And someone will have to provide it sooner or later.