Home WarZone Biden to Netanyahu: Your worst nightmare is here 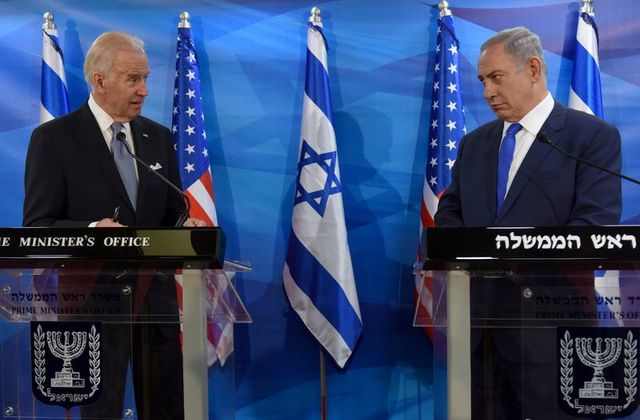 Obviously this clarion call is pregnant with meaning because, as we have seen in previous articles, Trump’s policy with respect to Iran comes largely from the Israelis. In fact, one Israeli journalist argues that Israel sought to humiliate Joe Biden by assassinating Iranian scientist Mohsen Fakhrizadeh on the 27th of November.[2]

The Washington Post itself reported that Netanyahu has been getting ready just in case Biden turned out to be the president last October, when Netanyahu approved “2,260 new housing units in the occupied West Bank — two-thirds of them in areas that would almost certainly be included in the Palestinian state that Biden strongly supports. Remarkably, 600 of the new units were designated for Jewish settlements that were prohibited from expanding even under Trump’s grotesquely one-sided Mideast peace plan, which Netanyahu endorsed.”[3]

Trump, said Biden, “has repeatedly ratcheted up tensions, risking bringing us closer to another Middle Eastern war without a realistic strategy or endgame. He has lurched into risky escalations that endangered our troops — and then downplayed their brain injuries as ‘headaches.’”[4]

Biden moved on to talk about the plan that the Obama administration established, one which obviously continues to give Benjamin Netanyahu headache: “Five years ago, American-led diplomacy produced a deal that ensured it would take Iran at least a year to produce enough fissile material for one bomb.”[5]

Biden says he intends to bring this diplomacy back on the political table, and again this is Netanyahu’s worst nightmare because diplomacy, nuclear peace deal, and dialogue seem to give Netanyahu diabetes. Biden:

“I will offer Tehran a credible path back to diplomacy. If Iran returns to strict compliance with the nuclear deal, the United States would rejoin the agreement as a starting point for follow-on negotiations. With our allies, we will work to strengthen and extend the nuclear deal’s provisions, while also addressing other issues of concern.”[6]

Biden wrote that he would work with the Israelis in order to bring about this plan, but we all know that he is trying to be nice in public here because Netanyahu, since the last twenty years or so, has been willing to move heaven and earth to create chaos and conflict with Iran.

Biden ended his assessment by saying that he is “ready to walk the path of diplomacy if Iran takes steps to show it is ready too.”[7] Well, Iran has been ready long before Biden was even a teenager. Iran was on the path of democracy in 1953, when the Anglo-American empire completely overthrew a democratically elected president by the name of Mohammad Mosaddegh.[8]

Iran is still waiting for a reasonable, vibrant nuclear deal. “The Iranian foreign minister, Javad Zarif, said on Nov. 17 that a return to full implementation by the United States and Iran can be ‘done automatically’ and ‘needs no negotiations.’”[9] Moreover, Iran has never acted irrationally. Vice Adm. Sam Paparo, the head of the US Navy’s Fifth Fleet, has recently declared that despite the fact that there have been some tensions between the US and Iran, Iran has been “respectful.”[10] Paparo elaborated:

“We have achieved an uneasy deterrence. That uneasy deterrence is exacerbated by world events and by events along the way. But I have found Iranian activity at sea to be cautious and circumspect and respectful, to not risk unnecessary miscalculation or escalation at sea.”[11]

Trump’s view on Iran completely shocked European allies. Those allies include United Kingdom, France, Germany, Russia, and even Chin. They all agreed that Iran was in compliance with the nuclear deal and had not been cheating. But because he was listening to the Israeli regime, mainly Benjamin Netanyahu, Trump had to concoct categorical lies in order to place sanction on Iran. When Netanyahu realizes that he could lose the Iran deal, he released a statement saying, “There can be no going back to the previous nuclear agreement.”[12]

Obviously Netanyahu is still living in fear. Since truth, political harmony, and peaceful resolutions give him nightmare, he seems to have a panic attack whenever he doesn’t get his way. Netanyahu could not stop Obama from keeping the nuclear deal. Even the Washington Post implicitly admitted:

“Netanyahu was unable to block the deal. But after Trump’s election in 2016, the prime minister found a president who shared his criticisms and who was willing to pull out of the deal.”[13]

If Biden brings back the nuclear deal, if he takes Netanyahu to the woodshed and avoids another disaster in the Middle East, then he is doing America and much of the world a great service. Netanyahu again would make sure that Iran doesn’t get a reasonable deal. We certainly cannot wait to see how this will play out in the next few years.