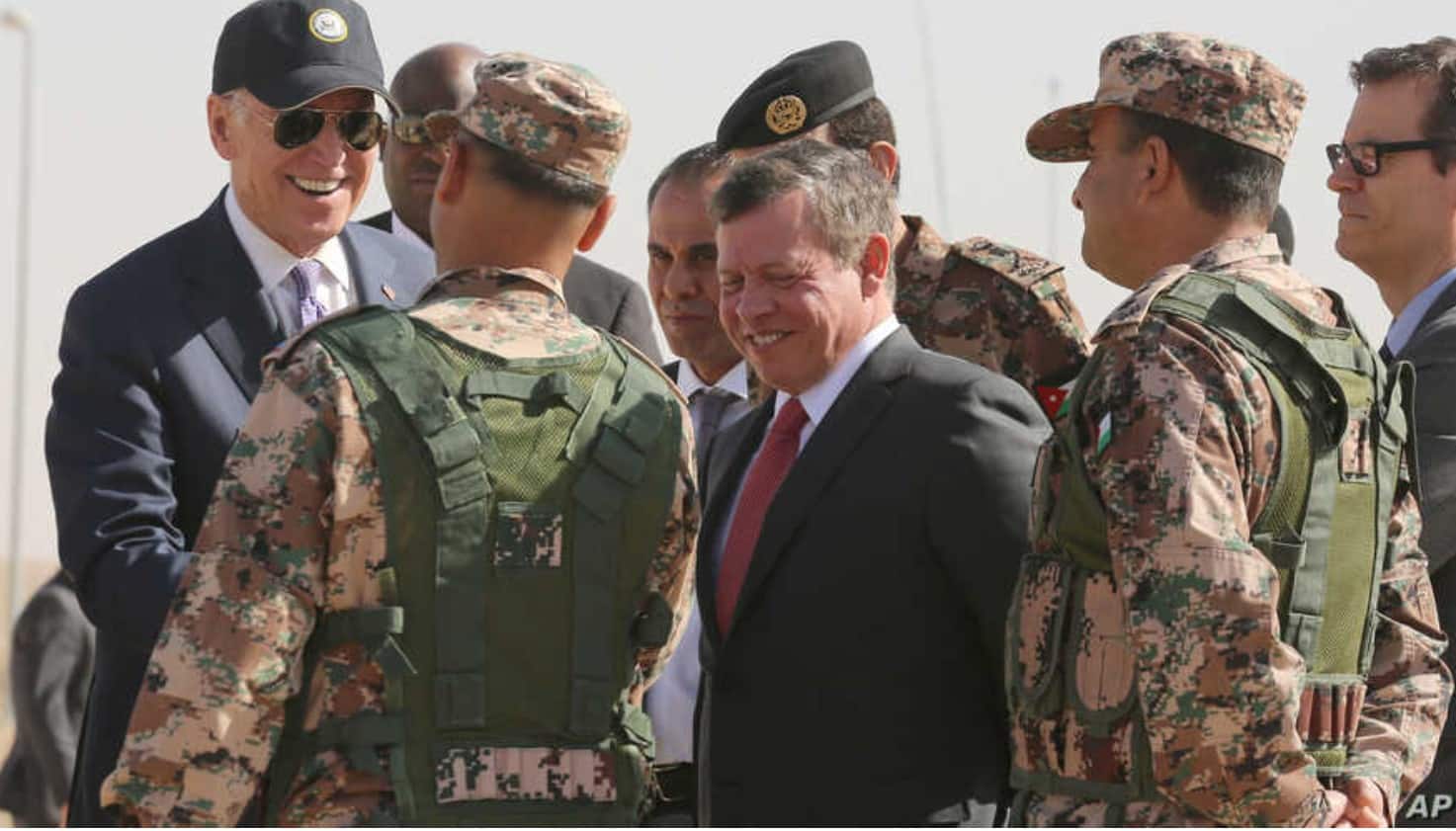 By Richard Cook for VT

The prime challenge faced by the incoming Biden administration is to deal with the debris left by Trump with regard to the slide toward world war between East and West. The main trigger has been Trump’s weakness toward the ambitions of Israel.

Everything else, even mega-issues facing the U.S., such as economic rebuilding, pandemic relief, racial justice, and climate change, is subordinate in comparison.

Let’s take a broad view of where matters stand in the world today. Clearly the world is divided between two poles: 1) Eastern collectivism, represented by the Russian/Chinese communist regimes having reached full formation during the 20th century; and 2) guardianship of Western liberties which has become the responsibility of the U.S., along with Western Europe, through the outcome of World Wars I and II.

Hence there should come the fairly obvious conclusion that the standoff between Eastern collectivism and Western liberties is the key to whether there shall be peace on earth in our time. Israel, however, is the “fly in the ointment.”

The historic differences between East and West are inherent in the nature of things and are not going away anytime soon. The distinctions are based on different modes of perception among diverse nations and races with varying geographical, climatic, and historical origins.

The question is whether East and West can live together on the same planet through the only means available: compromise, interaction, and mutual respect. Thus each side should be able to take advantage of the wisdom and achievements of the other.

We are talking in part about old-fashioned balance-of-power politics, which the U.S., at least, seems to have forgotten. Given today’s technology, the alternative is whether the two sides will destroy each other in a final nuclear conflagration.

In the meantime, the groundwork for disaster is being laid through cyberwarfare, whereby each side is attempting to undermine the other by chipping away at the computer systems upon which we have all become totally dependent for everyday functioning of our respective societies. This includes space-based communications.

East and West both harbor desires to control the planet. Both must give up this vain ambition. The interest of humanity clearly lies with the aforesaid compromise, interaction, and mutual respect. Meanwhile, as the two sides plot against each other, earth itself is attempting to ensure her own survival via lawful changes in climate resulting from abuse of technology by humanity at large.

Whatever its causes, the Covid-19 epidemic has exposed both the weaknesses and strengths of the antagonists. But the failure of the Trump administration to focus on the economic effects of the pandemic due to its obsession with arms sales to Middle Eastern nations and its open agenda of fomenting war against Iran was likely its undoing.

Now the Biden administration faces the necessity of repairing the damage. First must come full recognition that ground zero of the East-West conflict has been, for over a century, Israel and the Middle East.

I would like to point out in this context that a significant portion of Western Christians have been under the delusion that the Zionist project that created Israel has something to do with religion. It needs to be burnt into our awareness that historically both Soviet Communism and Israeli Zionism were planned and carried out by the Khazars of Russia, who originally converted to Rabbinic Judaism in the fifth century CE.

The Khazars were a Turkish-Mongol tribe akin to those of Atilla the Hun, Genghis Khan, and Tamerlane. Their original incursion in coming out of central Asia to the southern Russian steppes—into Europe—was a migration of a non-European race into alien territory.

Their conversion to Judaism is lost in the shadows of history but was likely caused by motivations of self-preservation. Its result appears to have been to attach their native restlessness to the apocalyptic ideology of the Old Testament and its tribal god of conquest as expressed most vividly in Deuteronomy.

I am well aware that these statements expose me to accusations of anti-Semitism, but this is misplaced, as the Khazars are not a Semitic people. Also, a discussion of racial origins and proclivities is not the same thing as “racism.”

Thus we can fairly observe that when the Khazars took over the Zionist movement around the turn of the 20th century, they asserted an unwarranted leadership of worldwide Jewry, which included the Sephardic Jews of Middle Eastern origins who had spent several centuries assimilating into the culture and economy of the nations of Western Europe and America.

For readers who would like more detail on this narrative, I would refer you to the seminal work by British journalist Douglas Reed entitled “The Zionist Controversy.”

Douglas Reed points out in great detail how it was through Zionism and the leadership of the Bolshevist Revolution by these same Khazars that the two chief revolutionary movements of the 20th century were formed. In Russia, the Bolshevists used terror and genocide to create the Soviet Union on the ashes of the empire of the Tsars.

In Palestine, through British and American acquiescence, Khazar emigrants from Russia created the modern state of Israel by similar tactics. In order to do this, they had to smash the resistance of the Islamic inhabitants of Palestine and other nations of the Middle East. They are still at war with the Islamic world, propped up by American money and armed force.

The twin revolutions of Communism and Zionism continue at large today. Despite the collapse of the Soviet Union in the 1990s, Russia remains a collectivist authoritarian state under leader-for-life Vladimir Putin. The Second Cold War between the U.S. and Russia is escalating through Russian interference in American presidential elections and cyberattacks on U.S. public and private computer systems.

In the Middle East, Israel remains at war with most of its neighbors, as it desperately tries to foment conflict between its U.S. sponsors and Iran, which it perceives as the backer of its most serious opposition, that of the Shia Moslems spread among several Islamic nations, including Iraq and the Lebanese forces of Hezbollah.

In the presidential election of 2016, Russia succeeded in influencing the election of its favorite, Donald Trump, whose bankrupt financial empire had been kept afloat by laundered money from Putin’s allies in the Russian Mafia. Trump dutifully put his favoritism toward Israel on display by pulling out of the JCPOA with Iran that had been negotiated by the Obama/Biden administration, by moving the U.S. embassy to Jerusalem, by covertly placing U.S. personnel in Syria, by giving approval to illegal Israeli settlements in the West Bank, and by carrying out or approving assassinations of key Iranian figures.

It is also pertinent that Trump has taken such a hostile attitude toward China, accusing the Chinese of causing the Covid-19 pandemic and calling out China for its economic expansionism and monetary aggression, with the U.S. military following suit by labeling China our chief adversary. Trump also made electoral hay by accusing the Democrats of exporting U.S. jobs to China, a charge that was true enough, but on the basis of circumstances dating back decades and originating with Republican President Richard Nixon. The jury is still out, but I would like to suggest that Trump’s hostility to China derives at least in part from a desire to please his Russian controllers who view the Chinese as geopolitical rivals.

Then, after Trump lost the presidential election to Biden in November 2020, there were numerous indications that Trump would do whatever it took to ignite a full-blown war against Iran, though such action may have been prevented by the possible refusal of U.S. military leaders to take such radical steps. But the danger remains. Obviously, such a war would provide Israel with cover to extend its power and influence throughout the region at Iran’s expense.

At the same time, there is something ludicrous about the fact that after more than a century of trying to recreate a Jewish state on Palestinian soil, the state of Israel still controls so little territory, has such a small population, and is so totally dependent for survival on the American superpower half a world away.

Israel itself is a pariah, viewed by its much of the world as a terrorist apartheid enclave. Yet Israel and its right-wing governmental elite seem to hold the entire world hostage to its quest for power.

This is the situation that Biden has inherited. He has already said that he plans to reinstate U.S. participation in the JCPOA with Iran but has also indicated his backing and support of Israel. But the JCPOA is only one small part of the puzzle that the U.S. government must move toward solving.

So I am going to make some suggestions of measures both large and small that the Biden administration might take to redress a situation where humanity may be about to fall off a cliff into chaos and disaster.

This is obviously an ambitious, and in some respects, a self-evident agenda. But these are goals that are essential to achieve if the U.S., and the world, are to survive and prosper. At the same time, nothing along these lines can be accomplished unless our national leadership is capable of actions that transcend personal or political motives.

These are also eminently practical proposals that the more rational elements of our foreign policy establishment can recognize as essential in a time of crisis.

The current political gridlock within the U.S. among Republicans and Democrats, conservatives and liberals, Christians and seculars, etc., is not only shameful, it is also suicidal. The only way out is for individuals, starting with our leadership class, to become aware of when their actions are based on ego and self-interest vs. what is beneficial both for the nation and for humanity as a whole.

It is time to stop pointing the finger and blaming others for our own failings. We are all members of the human family. We inhabit the same earth. We are all mortals with responsibility for future generations. It is time to remember, “Peace on earth and goodwill toward all.”